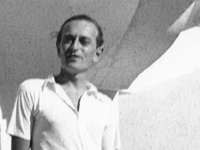 In the late 1920s David Lean started out as a tea boy/runner at Gaumont's studios at Lime Grove, Shepherd's Bush. After a variety of jobs he finally helped to cut an early sound feature film directed by Sewell Collins, THE NIGHT PORTER (1929). He then decided to move from feature films to news production, starting work in 1930 as a cutter for one of the first British sound newsreels, Gaumont Sound News and later British Movietonews. There was a clear distinction in the newsreels between the editor, who had overall control of issue and the cutter, who physically put together the film. Lean's preference for the term cutter to describe his work as an editor may well go back to this time.

These newsreel years marked an intense apprenticeship where he worked with some of the best British sound cutters in the busness before becoming a editor on features directed by Bernard Vorhaus. It was during these years that he learnt how to use pictures to tell a story in just couple of minutes, deciding what the audience would look at and when. This dramatic treatment of actuality can be traced in 49TH PARALLEL (1941) and his joint directorial debut with Nöel Coward, IN WHICH WE SERVE (1942), which was later used by the Royal Navy for training purposes.

In the autumn of 1929 one of Gaumont's first sound pictures, THE NIGHT PORTER, ran into problems at the company's Lime Grove studios. Although the director Sewell Collins could edit silent films, matching sound and picture was proving too much. 'There was only one person in the studio who could cut and synchronise sound and picture,' Lean recalled, 'John Seabourne who cut the Gaumont Sound News'2 An hour of watching Seabourne at work gave Lean the basics and he then cut the feature alongside Collins.

'Film-editing is very closely allied to direction. Director and editor both decide what the audience has got to look at and when.'1 David Lean

The Challenge of Cutting Sound: Different Speeds and Different Rhythms

Lean was one of only a few people who had the different skills and approach that sound required. Silent films were shot and projected at variable speeds and were cut by hand, often with a pair of scissors. Lean observed that if anything didn't match, you could always put in an extra title. As the editors ran the film through their fingers they developed their own sense of 'cutting' rhythm. Editing is very much the physical manipulation of celluloid and never more so than in this period of 'cutting in the hand'. Sound fundamentally changed the nature of this work as the environment became more mechanised and standardised.

'I started out editing silent pictures...When sound came in, it slowed everything down. Soundtrack became a tyrant. Having to lace up and run track and picture together. Bloody cumbersome. You need rhythm to edit well.'3 David Lean

Silent films were shot and projected at variable speeds that became standardised with sound to 24 frames per second. The picture and the sound had to be synchronised and this required a great deal of co-ordination by hand, holding the two strips of film tightly together. Mechanisation started when Moviolas were developed in the early 1920s, letting editors check a few feet of film at a time. In 1929 the Moviola was adapted for sound and transformed into an 'upright' editing machine complete with foot pedals. It soon established itself as the element around which a cutting room revolved in the 1930s, along with a synchroniser and rewinder. The editors that survived into the sound era were those who embraced a mechanised work environment and could adapt their rhythm, physically and visually, to it.

Lean's early mentor Seabourne left Gaumont Sound News around January 1930 leaving a vacancy in the editing team that Lean filled. The team was led by the news editor Keith Ayling, an ex-Fleet Street journalist. Alongside him was Roy Drew, who had been working as a cutter since June 1929. The newsreels were literally at the cutting edge of sound technology and together the team had to deliver two issues a week, on a Monday and Thursday. They were based at Lime Grove which was on the verge of major re-development at this time. When the new studio building opened in 1932, the cutting room was in the 'Penthouse', the top floor.

The first thing Lean learnt was how to cut negative film at speed. Time was always tight in newsreel production and the exposed film would be rushed to Shepherds Bush, straight from the cameramen if they were in London or often the railway station.

The negatives would then be sent up to the cutting room. The cutters would work well into the night, shaping the story, synchronising the sound and literally 'faking' it with library footage where necessary. Drew used an Editola, a British version of the Moviola, to work on the material.

But synchronisation problems dogged the first year of Gaumont Sound News production. This was a new technology and there were many fledgling sound systems around at the time. Gaumont used British Acoustic, with sound and picture recorded onto separate films and then brought together, eventually using synchronisation machines. If the sound camera was operating slightly slower this caused 'quite a headache', Drew recalled, given the time constraints of newsreel production. Their rival Movietone had developed a method of recording sound directly on to the film but it would take some time before the Gaumont engineers caught up.

These early years of sound were a period of great experimentation and creativity as sound and picture went through this difficult process of convergence. Early Gaumont Sound News issues often had bursts of natural sound, followed by a snatch of commentary and then a story in silence. It would take a couple of years before they settled into a carefully tuned ten minute drama, narrated in clipped tones to an orchestrated background of natural sound and music. This fluid environment enabled Lean to commentate on stories as well as cut them. Although records from this period are poor, it is certain that the first edition of the R101 disaster, released early on the evening of Sunday 5th October 1930, is narrated by David Lean.

At the end of October, Lean's colleague Keith Ayling left to join the rival British Movietone News - the leaders in sound technology. When the company expanded its newsreel operation in early 1931, Ayling invited Lean to join his new team. Led by Sid Wiggins, they had some of the best cutters in the business and Lean joined them in March.