In the early 1930s people went to the cinema to watch the newsreels, to see and now hear about people, places and events that they had read about in the papers. The ten minute newsreel was at the beginning of the programme, squeezed in between cartoons and travelogues before the main feature. By the time the sound newsreels were hitting their stride in 1930, an ordinary cinema programme could last three hours with the length of features increasing all time. People wanted to experience the new realism of sound news but didn't always have the time or money for a whole cinema programme. The newsreel theatre showed the news in hour long programmes, giving people a chance to view it when they wanted and for as long as they liked. It was an early example of what we now take for granted, news on demand. 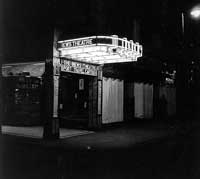 The first newsreel theatre, the Fox News Reel Theatre on Broadway, was the brain child of E.L. Harvey, the managing editor of Fox Movietone. He believed that the sound newsreel had captured the public's imagination to such an extent it had created its own specialised market and people would pay to see continuous hour long programmes of the 'latest' news. It was an instant success and in 1929 trade papers in Britain reported that 'patrons' were standing three deep for '...the best show in town with every emotion convincingly catered for'.

British Movietone had launched their regular sound newsreel British Movietonews in June 1929 but it would over a year before it was shown in a newsreel theatre in Britain. In August 1930 the Avenue Pavillion on Shaftesbury Avenue, London was transformed into the British Movietone News Theatre. Reports claimed that in its first ten hours, on 18th August, four thousand people had visited the theatre with over one thousand turned away. By January 1931 Movietone claimed that half a million people had visited the theatre. With a capacity of 500 that meant it had filled up over 1,000 times.

The news theatre programme was promoted by Movietone as a feature in its own right taking the audience 'Round the World in Fifty Minutes'. Part of the draw was that the latest news would be shown here first and in more depth. In early 1931 Movietone expanded their personnel and created a special department to compile news theatre programmes to cope with the increasing number of theatres across Britain. 1931 saw news theatres in London, Brighton and Manchester. At the end of the year a special 2000 ft review was produced exclusively for the News Theatre, which in itself became the subject of a Movietone trailer. The production of British Movietonews and the activities of the News Theatre were immortalised in rhyming couplets by Eric Dunstan of The Star.

News theatres heralded a completely modern and innovative approach to the design of the building. These midget theatres, as they were called in the States, had to take in to account the different way in which the audience interacted with the news. In April 1931 the opening of the Trans-Lux newsreel theatres in New York was regarded as the epitome of modern design. This 'Automatic Kinema' used turnstiles to control the constant flow of people in and out of the cinema. Back projection, said to be easier on the eyes and less noisy, was introduced and there was constant lighting, presumably to help the movement of people.

Three months later Reginald Ford opened the first of his chain of Cinéacs (a combination of cinema and actualité) at Montmartre in Paris. The architects Adrienne Gorska and Pierre de Montaut incorporated and extended many of the innovations pioneered in New York, particularly the use of neon in advertising and as a means of directing the audience in and out of the theatre. They would go on to design at least fifteen newsreel cinemas for Ford, including the first railway newsreel theatre at Gare St Lazare. Gorska and de Montaut specifically designed the space to suit the specific needs of a newsreel audience. Newsreel theatres not only showed you the modern world, they created it for you.