A History of 1970s Experimental Film

About the reviewer: Dr Glyn Davis is a Chancellor’s Fellow and Reader in the School of Design, University of Edinburgh. Before taking his position as Chancellor's Fellow, Glyn was a senior lecturer in screen studies at the University of Bristol (2005-2008), and the coordinator of postgraduate studies at The Glasgow School of Art (2008-2012). He has contributed to such publications as The British Monarchy on Screen (2016), Cinema Journal: The Journal of the Society for Cinema and Media Studies (2015) and Moving Image Review & Art Journal (2014). Glyn also oversees the ‘Art and its Histories’ strand of the Artist Rooms partnership, a major collaboration between the University of Edinburgh, the National Galleries of Scotland and the Tate Galleries amongst others.

Historical accounts of British experimental cinema often sweepingly portray the 1970s as a decade dominated by structural and materialist works – that is, films which rejected content in favour of explorations of the medium’s form and distinct qualities. The artist and historian Patti Gaal-Holmes’ book takes this reductive characterization to task and proposes an alternative reading of the decade. She offers up ‘a form of historical reclamation’ (page 1), drawing attention to experimental films that have often been sidelined or ignored. In particular, she argues against the ‘return to image’ myth, according to which an interest in aesthetics resurfaced in 1980s experimental cinema. ‘Image’, she argues, ‘never disappeared in the 1970s, and thus made no return.’ (1) 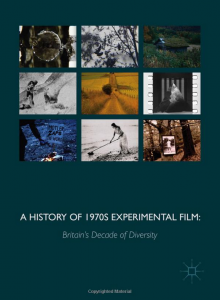 Following an introduction to this central thesis, and a brief but nuanced consideration of the ways in which histories of film get written, Gaal-Holmes turns in her second chapter to the variety of institutions that facilitated the making of experimental films in the 1970s. This detailed and valuable overview of what she alliteratively refers to as contexts of ‘distribution, dissemination, debate and discussion’ (43) covers a wide array of material. This includes (amongst other factors) the 1971 Attenborough Enquiry into who should be responsible for funding experimental film, the 1974 formation of the Independent Film-Makers’ Association, and the role of the art school system in nurturing the production of avant-garde screen works (as well as providing employment for filmmakers as teachers).

The subsequent four chapters in Gaal-Holmes’ book trace separate-but-interconnected thematic strands through the British experimental cinema of the 1970s. Chapter three examines the relationships between experimental film and other forms of visual art, including painting, drawing, sculpture and photography. The chapter forges productive connections between structuralist and materialist filmmakers, and creators driven more by matters of aesthetics: many, it emerges, wanted to explore tensions and connections between filmmaking and other forms of artistic practice. For instance, Gaal-Holmes argues that landscape, most often discussed as a genre of painting and photography, also serves as a recurrent concern across 1970s experimental film, whether being treated romantically (as in films by Derek Jarman and Margaret Tait) or more conceptually (as in works by Chris Welsby).

Chapter four focuses on films in which ‘the personal, symbolic or metaphoric use of image tends to be central’ (98). Individual works including Peter Whitehead’s Fire in the Water (1977) and Derek Jarman’s In the Shadow of the Sun (1974-81) are dissected in detail; key practitioners such as B. S. Johnson, David Larcher and Margaret Tait are discussed. Here, Gaal-Holmes is particularly successful in effecting her intended historical recalibration: many of the works and practitioners she discusses have been neglected or marginalised in previous accounts of 1970s British experimental cinema.

Following a necessary chapter on structuralism and materialism that pays this strand of experimental film history its due, Gaal-Holmes’ final chapter explores the relationship between women and film. Key conceptual concerns of the decade (such as the notion of a distinctly feminine aesthetic) are neatly summarized; dominant themes in experimental films by women are identified, and significant works named and discussed. This chapter, in particular, serves as a valuable overview of a broad and complex topic, and could be extracted by teachers for classroom use.

For those students unfamiliar with the history of British experimental film, a book such as David Curtis’ A History of Artists’ Film and Video in Britain, 1897-2004 (BFI, 2007) may be needed to provide grounding before tackling Gaal-Holmes’ book. Curtis’ book is also, notably, comprehensively illustrated in colour, whereas the only images in Gaal-Holmes’ are on the cover (a shame, given the latter’s challenge to the ‘return to image’ thesis). However, Gaal-Holmes’ text is to be commended for paying sustained attention to some neglected works and directors, and for setting in motion an important political debate about the ways in which the history of experimental cinema is written.