Home Viewfinder MagazineBrackett on Wilder - It's the Pictures That Got Small

Brackett on Wilder - It's the Pictures That Got Small

About the Reviewer: Dr Karen McNally is a Senior Lecturer and Course Leader in Film Studies at the London Metropolitan University. Her research has focused on classical Hollywood cinema, star imagery and post-war American culture with her major research exploring Frank Sinatra’s star image in relation to post-war cultural debates around masculinity, race, class, ethnicity and sexuality. She is currently conducting research on the redefinition of Montgomery Clift as a cult star.

In August 1936 Hollywood screenwriter Charles Brackett noted in his journal: ‘I am to be teamed with Billy Wilder, a young Austrian I’ve seen about for a year or two and like very much. I accepted the job joyfully.’ Their work together on Bluebeard's Eighth Wife (1938), directed by Ernst Lubitsch, initiated one of Hollywood’s most successful writing collaborations, resulting in the screenplays for such Hollywood gems as Ninotchka (1939), Ball of Fire (1941), The Lost Weekend (1945) and Sunset Boulevard (1950) and garnering five Academy Award nominations and two Oscars for Best Screenplay. Brackett’s private journals, held at the Academy of Motion Picture Arts and Sciences’ Margaret Herrick Library and edited by film historian Anthony Slide for this absorbing new publication, provide a first-hand account of this partnership of opposites of a New York WASP and Austrian Jew from Brackett’s largely overlooked perspective. In addition, readers are treated to a behind-the-scenes journey through the politics, studio deals and private scandals of Hollywood in the 1930s and 1940s via Brackett’s entertaining commentary. 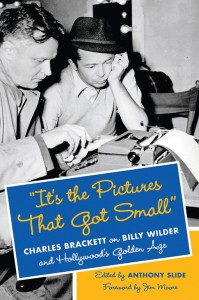 The journals begin in 1932 when author and playwright Brackett is reluctantly tempted out to the West Coast by famed agent Leland Hayward, and conclude with the final rupture of his collaboration with Wilder that occurs as production wraps on Sunset Boulevard in 1949. Brackett’s tumultuous relationship with Wilder becomes palpably evident as the journals reveal the rows that punctuate their work, one ending with Brackett smashing Wilder’s Bulgarian flute over his knee. Brackett’s impatience with his partner’s inconsistent work patterns and various love affairs is tempered by his admiration for Wilder’s talent, disclosed as he veers between the repeated intention to withdraw from the partnership and describing Wilder as ‘the best dramatic mind with which I ever came in contact.’ At the same time, the journals suggest Brackett’s anxiety that he will be left behind in the wake of his partner’s directing career and increasing fame and recognition. Slide’s editorial notes add richness to these revelations, pointing, for example, to an entry Brackett made after viewing an early cut of Double Indemnity (1944), directed by Wilder and co-written with crime novelist Raymond Chandler. Slide’s note exposes the resentful musings of Brackett who, on re-reading his journals in 1950, crossed out this entry in which he labelled Wilder ‘a second-rate director’ and referred to ‘the awful thinness of his mind, his stupidly limited interests.’ The entry that remained is one made after Brackett had seen the final version of the film, describing it as ‘the most flawless bit of picture technique imaginable,’ underlining the ambivalence at the heart of this creative relationship.

The journals moreover give a fascinating glimpse into the workings of the industry, through not only the screenwriters’ frustrating dealings with various studio heads, but Brackett’s central position in the Screen Writers Guild and the Academy, becoming President of the latter in 1949. World War II and America’s post-war paranoia both permeate the pages of Brackett’s writing, from Wilder’s propaganda work for the Office of War Information to clashes between staunch Republican Brackett and liberal Wilder over the House Un-American Activities Committee. Brackett’s suspicion when Wilder departs on a counselling trip to Washington that his partner may have Communist sympathies, prompting him to consider writing a short film entitled How to Recognize a Communist, reveals as much about the political climate of the time as the hearings themselves. Even Brackett’s morsels of Hollywood gossip offer fascinating insider details. Having attended the wedding reception of Judy Garland and Vincente Minnelli, for example, Brackett notably describes the groom as ‘white as a sheet and terribly nervous’ and details their departure ‘a press agent beside the chauffeur’.

The writing and filmmaking process within the studio system forms the core of these journals, detailing Brackett’s work both with and without Wilder. As such, the book becomes an invaluable resource, but the above insights into Hollywood culture and the personal relationship between Brackett and Wilder make “It’s the Pictures That Got Small” both a mine of information and an entertaining read about Hollywood’s studio era.