Home Viewfinder MagazineChronicle of a Summer

Chronicle of a Summer

About the Reviewer: Dr Stephen Forcer is Lecturer in French Studies at the University of Birmingham. His main areas of interest are Avant-garde and modernist French film and literature, especially Dada and Surrealism in France and French cinema. His publications include Modernist Song: The Poetry of Tristan Tzara (2006) and the forthcoming, Dada as Text, Thought and Theory. Tel:  0121 414 5985 / Fax 0121 414 3834 Email s.m.forcer@bham.ac.uk Twitter DrStephenForcer

Are you happy? Such is the question put to members of the French public at the start of Jean Rouch and Edgar Morin’s moving, experimental and openly unperfected piece of cinéma vérité, Chronicle d’un été (1960), which has been re-released on DVD as Chronicle of a Summer as part of a superb package put together by the BFI. 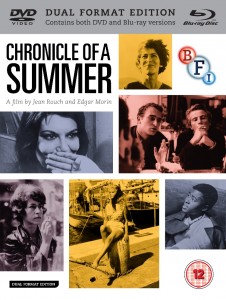 Rouch and Morin bring serious cinematic and ethnological expertise to the project, and the film won the Critics’ Prize at Cannes in 1961, though an opening sequence that refers to illustrious previous winners of the Prize points to an insecurity complex on the part of Rouch and Morin, which becomes increasingly visible. The body of the film is made up of a series of interviews, discussions and uncommented footage involving a pre-selected ‘cross-section’ of French society: the Jean Gabinesque working class tough, the political activist-now-père de famille, the Franco-African student, the cover girl, and so on. The film ends with a screening of a rough cut for the participants, who express wildly divergent opinions about the film and individual interviewees, and is appended by an essayistic sort of ‘Conclusion’ from Morin and Rouch as they review the project, simultaneously sanguine, disappointed and a little absurd as they walk up and down an aisle of exhibits in a natural history museum.

The educational potential of the DVD is vast, not only for students and teachers of film production, history, theory and criticism – as well as those interested specifically in post-WWII French society, politics and culture – but in its constant raising of questions around the psychology, sociology and philosophy of everyday life and work. Historically, the film catalyses with a range of other texts and contexts, including Mass Observation, the Holocaust, the nouvelle vague and its anti-heroes, May ’68, Franco-African decolonisation and independence (the Algerian War generates heated comment), as well as more general themes such as class, family life, love, racism and war. But the most striking aspect of the interviews is the sense of absurdity, pent-up aggression and pathos with which participants describe their lives, particularly their jobs. Time and again work is described as a form of madness and repression by interviewees who come across as sadly real characters from the Theatre of the Absurd, articulate in their expression of colourless, self-perpetuating routine and obligation, and blunt in their boredom (in word and tone, many interviewees anticipate the title of a Le Monde editorial published two months before May 1968: ‘La France s’ennuie’ [France is Bored]). The human aspirations, vulnerability, frustrations, anger and misery expressed in the film come across acutely, translated or not (sub-titles tend in places more towards paraphrase than translation but overall give a decent rendition of the dialogue). By the end of the film Chronicle d’un été seems an account much less of a summer than of the problems, absurdities and neuroses posed by modern working life.

Implicitly and explicitly, Chronicle d’un été is packed with further existential and ethical questions of particular pertinence to students and teachers of film. Is film unavoidably tied to a sort of quantum law, whereby filmmakers and their apparatus can never observe a subject without changing the nature of that subject? Is the ‘truth’ sought by Rouch and Morin always elsewhere, where the camera is not? Can the racism of an interviewee be overlooked if it comes from a Holocaust survivor? What is the role played by sexual desire and gender politics, conscious or unconscious, by directors in their choice of subjects and editing? Is film spectatorship inherently unethical in its voyeurism?

And yet for all the  (quasi-? pseudo-?) scientific language around the genesis and content of the film, it remains an unclassifiable piece of work, as Raymond Bellour suggests in the ‘making of’ documentary that accompanies the DVD. Complemented in the BFI package by a range of extras - including audio of a Jean Rouch lecture and excellent informative texts by Ginette Vincendeau, Tom Milne and Emilie Bickerton - the film is concerned with personal, existential questions that it acknowledges and conveys as simultaneously banal and profound. What is happiness? How do you live? Who are you? True to its own commitment to investigation, Chronicle d’un été is an admirably ‘unfinished’ experiment that internalises such questions of purpose and identity within its own form and content, leaving us richly and valuably uncertain as to what it is that we have just watched.