About the reviewer: Lloyd Llewellyn-Jones is Professor of Ancient Greek and Iranian Studies at the University of Edinburgh. His research interests include ancient Greek socio-cultural history, especially women's history and gender-issues, dress, and visual culture. His publications include The Greeks at War (2004), Dress in Ancient Greece and Rome A-Z (2007) and King and Court in Ancient Persia 559-331 BCE (2013). In February 2016, Lloyd took up the Chair of Ancient History at Cardiff University.

Prior to the release of Birth of a Nation (1915), D.W. Griffith had begun filming a piece he had blandly titled The Mother and the Law; it dealt with the exploitation of workers. Griffith felt the story lacked bite and so he elaborated on the theme of social morality by exploring how badly the human race treats one another. World War I was raging and Griffith decided to tackle the long, unending history of human hatred by weaving together four tales: the modern-day episode, one set in France on the eve of the St Bartholomew Day’s massacre, another in Roman Judaea (the crucifixion of Jesus), and the last, most spectacular and memorable of the tales: the fall of the city of Babylon (‘the mother of harlots’) to the forces of the invading Persians. The four stories are intercut, connected always by a haunting image of the ‘eternal mother’ (Lillian Gish) rocking a cradle. 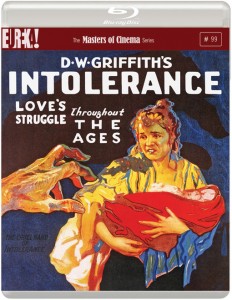 When it was released in 1916, Intolerance flopped. Today it is rightly regarded as an early film masterpiece. There is nothing technically naïve about the crafting of this film. Any stereotypes of silent movies are obliterated. Intolerance is a masterpiece of cinematic sophistication. As its layers of storylines develop and converge, so too the editor’s skill gets brought to the fore. The final fifteen minutes of the film whizzes along at a break-neck pace, the whole thing composed of short scenes spliced together with a breathless sense of drama. Griffith’s vision is masterful; the technical acumen that brought such a montage to fruition is bewildering.

Griffith’s use of the camera is astounding. He loves miniature detail, and his camera dwells in close-up on actors’ eyes, hands, and detailed, well-chosen props and costumes. Nothing, it appears, is left to chance; every shot is meticulously thought-through and expertly designed – although we know surprisingly little about the production design process of the film per se.

But Griffith’s skill is in utilising the full potential of the camera, and from the micro-detail of the close-up, he expands his vision to flood the screen with armies (quite literally) of movement. The scene of the bacchanal in courtyard of the Babylonian temple of Ishtar with its ‘cast of thousands’ begins with a high-perched long-shot of the vast, multi-levelled set, packed to overflowing with costumed extras. The camera sweeps down to ground level to watch the gyrations of the scantily-clad priestesses of the goddess, before ascending again in one smooth swoosh to take us high up onto the balconies and rooftops of the temple. To get this shot, Griffith placed his camera on an elevator platform on tracks, a sort of pre-cursor to the crane. It is an extraordinary moment.

The Masters of Cinema series does a very fine job indeed of transferring this century-old epic to digital crispness. The picture, a 2013 restoration of Kevin Brownlow’s and David Gill’s preserved celluloid print, is sharp and detailed yet retains both depth and warmth. Colour washes, as Griffith dictated, are applied at certain moments to add grandeur and vividness. Carl Davis’ fully orchestrated score is simply magnificent. Extras include Three Hours That Shook The World: Observations on 'Intolerance', a fine 2013 documentary, and the option to watch The Fall of Babylon and The Mother and The Law as two separate films, as Griffith later intended (both are accompanied by new scores by the Mont Alto Motion Picture Orchestra).

For all his bravado and boasting of his mastery of cinema spectacle, Cecil B DeMille never matched D.W. Griffith for his sense of scale or for his understanding of the technical potentials of film. Intolerance is an epic movie with cinematic intelligence and verve – rare features in the history of that weighty and often cumbersome genre. None of the epics of the 1950s come close to challenging the technical and visual superiority of Intolerance.