About the reviewer: John Hill is Professor of Media at Royal Holloway, University of London. Hill’s research and writing has focused on a variety of areas including film and television history, national and regional cinemas, the film industry, film policy and the politics of film and television. He is the author of Sex, Class and Realism: British Cinema 1956-63 (1986), British Cinema in the 1980s (1999), Cinema and Northern Ireland: Film, Culture and Politics (2006) and Ken Loach: The Politics of Film and Television (2011), as well as co-editor (with Christophe Van Eecke and Karel Vanhaesebrouck) of a special issue of the Journal of British Cinema and Television on Ken Russell (2015). He is currently leading the AHRC-funded research project on The History of Forgotten Television Drama in the UK. 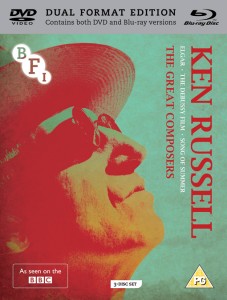 The work of the British film director Ken Russell (1927-2011) has tended to divide critical opinion. This is evident, for example, in the reactions to many of his most famous feature films – such as The Music Lovers (1970), The Devils (1971), Mahler (1974) and Tommy (1975) – which have either been applauded for their visual zest and departure from the norms of British social realism or denigrated for their lack of restraint, vulgarity and bad taste. This has also affected how Russell’s preceding career in television has been understood. On the one hand, Russell’s work for television has been regarded as primarily an ‘apprenticeship’ for the feature film work to follow; on the other hand, Russell’s work for cinema has been held to constitute something of a ‘fall from grace’ once he was free of the disciplines that working for the BBC had provided.

However, for a long time, such arguments have relied upon a relatively slender evidence base given the difficulty of actually seeing the full range of work for which Russell was responsible at the BBC. The BFI did release Elgar (1962) and Song of Summer (1968) about the composer Delius, in the early 2000s but the majority of the works in these two new collections - The Debussy Film (1965), Always on Sunday (1965), Isadora (1966) and Dante's Inferno (1968) - are released on DVD in the UK for the first time, having previously only been available in the US due to copyright issues.

As such, they provide a significant – though not comprehensive - introduction to the range and quality of the material made by Russell for television during this period. Russell joined the BBC in 1959 when he was recruited to make short films (shot on 35mm) for the arts magazine programme Monitor (1958-65) and then its replacement Omnibus (1967-2002). His first contribution to Monitor was a 12-minute film on the poet John Betjeman, Poet’s London (1959) but was swiftly followed by a dizzying range of programmes concerned with composers, painters, writers and performers that both extended and subverted the very idea of the arts documentary. 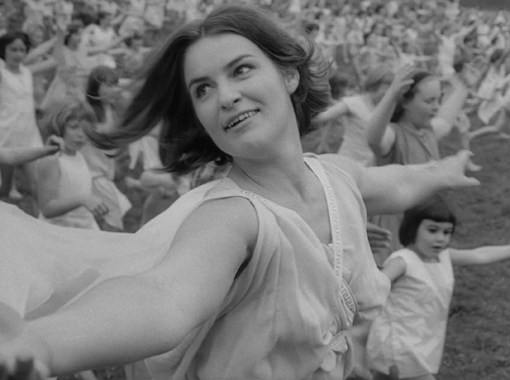 Vivian Pickles as Isadora Duncan in Isadora: The Biggest Dancer in the World (1966), part of The Great Passions. Image courtesy of BFI.

For while they were labelled documentaries (or ‘television biographies’), the main impulse underlying Russell’s films lay in the direction of drama and authorial self-expression. This, in turn, led to recurring debates within the BBC and the press about the legitimacy of mixing ‘fact’ and ‘fiction’ in such works and the ‘fairness’ of how artists and composers were treated. Although Russell was permitted to make use of actors, initially they did not, as may be seen in Elgar, speak and the use of close-ups was also avoided. The turning-point, in this regard, might be said to have been reached with The Debussy Film which took advantage of the conceit of making a film about a film unit making a film about Debussy to circumvent the restrictions on the use of actors. 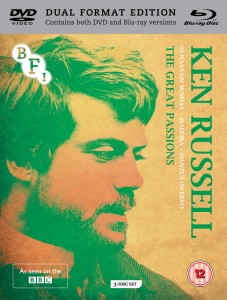 Its Fellini-like, self-reflexive structure also located it within the ambit of the art film and licensed Russell’s growing taste for subjective interpretation and flights of fantasy over documentary reconstruction and biographical fact. Indeed, in the case of Isadora, dealing with the dancer Isadora Duncan, the director, as a result of copyright problems, was prevented from drawing on a number of actual events in Duncan’s life for which he was then obliged to find imaginatively staged allegorical equivalents. This methodology was ultimately to bring Russell’s relationship to the BBC to an end following the controversy over his Omnibus film Dance of the Seven Veils (1970), which made use of grotesquerie and satire to portray the composer Richard Strauss as a self-styled ‘superman’ and Nazi sympathiser.

Although Dance of the Seven Veils is not included on these discs, what has been released is still enormously welcome. It clearly establishes the considerable stature of Russell’s work for television, independent of his work for cinema, and demonstrates the complex way in which it straddles drama and documentary, realism and fantasy, high culture and popular culture and the aesthetics of both film and television. As such, these collections will be of great value to teachers, researchers and students interested not only in the history of television documentary and drama-documentary but also television drama, costume drama and the biopic. They should also help to re-focus the debates about Russell himself and broaden the prism through which his achievements - as well as his failures - are assessed.