About the Reviewer: Dr. Sarah Barrow is Head of the School of Film and Media at the University of Lincoln. She was formally Principal Lecturer in Film Studies and Head of Department at Anglia Ruskin University, as well as being one of the founding members of the Board of the Cambridgeshire Film Consortium. She has contributed to such publications as the New Review of Film and Television Studies, the European Journal of Media Studies and Transnational Cinemas. Her main research interest is in the development of Latin American cinemas.

Stephen Hart, Professor of Hispanic Studies at University College London, coined the phrase ‘slick grit’ in 2006 when he delivered a paper in London on the ‘dynamics of contemporary Latin American Cinemas’ as part of a symposium on the transnational in Latin American and Iberian cinemas. At that point, he was using the term as a means to unravel and articulate the reason for the phenomenal box office success of turn-of-millennium films such as Fernando Meirelles’s Cidade de Deus (City of God, 2002) and Alejandro González Iñárritu’s Amores perros (Love’s a Bitch, 2000), which he argued had ‘opened up a dialogue’ with Hollywood to transform the face of Latin American films, resulting in worldwide critical acclaim and commercial success. 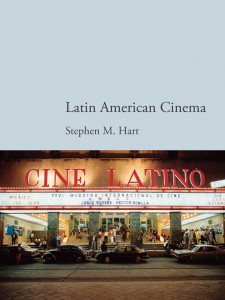 In his latest book, simply titled Latin American Cinema, Hart returns to the term ‘slick grit’ to describe one of three identifiable periods for Latin American cinema since World War Two, at which point film production in the region began to move beyond the stop-start activity of previous decades and to develop a distinctive identity and infrastructure. He suggests that these three fundamental stages are: the New Latin American Cinema (1951–75), influenced by Italian neorealism; the 'nation-image' era (1976–99), which recorded the brutal military regimes of the time; and the “slick grit” period (2000–2014), when the withdrawal of state subsidies forced directors to seek commercial success without compromising artistic and political ambition.

This mapping is in itself an ambitious task, given that the terrain of any regional cinema is so vast and there is always the danger of glossing over the many different routes and approaches to film-making. And yet in just 215 pages, Hart manages to give a tightly argued, persuasive and comprehensive account of Latin American cinema from its origins in 1896 to the present day, while also offering fresh perspectives on landmark films, filmmakers and movements. With 120 stills that span the entire period under review and include Black God, White Devil (1964), The Official Version (1984), Central Station (1998), Amores Perros, City of God, Babel (2006) and Gravity (2013), this text goes beyond mere survey and succeeds in making original connections between major historical connections, theoretical developments and important cinematic moments.

I was particularly drawn to the section which focuses on New Latin American cinema (1951-1975) and the Deleuzian concept of the Time Image and which includes a particularly lively analysis of Gutiérrez Alea’s seminal Memories of Underdevelopment (1968), which Hart argues is innovative not just for its revolutionary political force but also for its innovations in film language. For Hart, this film was distinctive in that it ‘embodied revolution in both its use of media and in its politics’ (48), drawing together form and content for a common purpose. In his careful analysis, he shows in detail how the Cuban protagonist’s experience embodies the Time-Image conundrum, with a disconnection from time and space that leads to a series of unsettling encounters interspersed with images of the past that create a startling ‘algebra of memory’ (54).

The key thread binding all these sections is the ‘hunch’ (borne out of Hart’s own experiences teaching documentary filmmaking in Cuba) that while attention to historical and political contexts remains crucial, a fresh focus on the changes in film technology – from hand-held camera in the 1950s to the digital turn at the end of the 1990s – is needed. Hart’s text therefore is written from the perspective of a film historian/theorist/maker who seeks to understand the ‘major paradigm shifts’ that have been brought about by new technologies.

Academically rigorous, meticulously illustrated and very accessible, Latin American Cinema offers a fresh perspective on the history of the cinema of a vast and diverse region that acknowledges the challenge of taking on such a complex task.