Shogun Assassin (1980) tells the story of Itto Ogami and Diagoro, his infant son, on a journey of vengeance following the murder of Ogami’s wife by the lunatic Shogun, his erstwhile employer.

This film is what might commonly be referred to as a ‘mash-up’ picture, a single film created from the parts of others.

This film is what might commonly be referred to as a ‘mash-up’ picture, a single film created from the parts of others. Examples of the genre, if that’s what it can be called, include the likes of Godzilla: King of the Monsters! (1956) and Steve Martin’s Dead Men Don't Wear Plaid (1982). In the case of Shogun Assassin the source material was the 'Lone Wolfe and Cub' series, a six-film samurai serial released in Japan between 1972 and 1974. Having purchased the American rights for $50,000, director Robert Houston set himself the task of editing together portions of the first two films, his aim the successful commercialisation of Japanese cinema in the Western market, something many large studios had been trying but failing to do since Bruce Lee did the same for Hong Kong. The final product is somewhat uneven. Though the events that propel Ogami and Diagoro on their journey are the same, the story itself bares only a vague resemblance to that of the LWAC series.

Characters, settings and motivations were changed to form a cohesive narrative, which, though necessary, resulted in events that sometimes feel disjointed; the finale in particular feels abrupt and unresolved. Despite its failings, however, SA provides something the originals lack, which is to say a sense of humanity. The LWAC series, while bloody and violent, have something of a playful quality (thanks in part to a be-bop/funk soundtrack), whereas here we find a far grimmer affair. In addition to rescoring the film, Houston took the decision to add voice over narration, provided by Diagoro, Ogami’s infant son. This last – the concept of witnessing the violence through the eyes of a child – gives a greater emotional impact, a fuller understanding, or at least appreciation, of the characters’ predicament, while the soundtrack – a series of bass-heavy Moog themes courtesy of Mark Lindsay and W. Michael Lewis – lends the film a sense of menace and urgency not provided by the SHAFT-esque wah guitars of the originals.

In light of its essentially bastardised nature, perhaps what’s most interesting about SHOGUN ASSASSIN is the following it has. Since its release in 1980, and subsequent UK banning in '83, it’s a film that’s enjoyed a healthy cult reputation. Considered by many to be a masterpiece of exploitation cinema, its standing has almost as much to do with the input of its distributors as word of mouth and the film itself. Previous releases on VHS and DVD sported gleeful sound bites pertaining to the film’s gratuitous violence: ‘Banned since 1983’, ‘Strong uncut version!’ and ‘It’s impossible to keep a body count!’

The intention now is to present it as a film worth serious consideration ...

It’s a bloody, uncompromising funfair of bloodletting and dismemberment, and statements to this effect have previously been worn like badges of honour. With Eureka Entertainment’s Blu-Ray release, however, it seems there’s been a change in tack. Gone are the trumpetings of massive body counts and assurances of uncensored butchery, so too the gleeful exclamation of Ogami’s tendency to ‘whip out his sword and relieve his victims of their heads’. Most likely it’s a reflection of the film’s relative tameness in the context of what’s available today, for while the violence remains undoubtedly gratuitous (limbs fly and heads roll; men are reduced to stumps), with films such as Saw (2004) and Hostel (2005) employing a level of gore and carnage so graphic and outlandish they've given rise to the term ‘torture porn’, it’s no longer the horror show it once was.

But perhaps there’s another reason. Perhaps it’s rather that the intention now is to present it as a film worth serious consideration, one that’s outgrown adolescent obsessions with graphic violence. 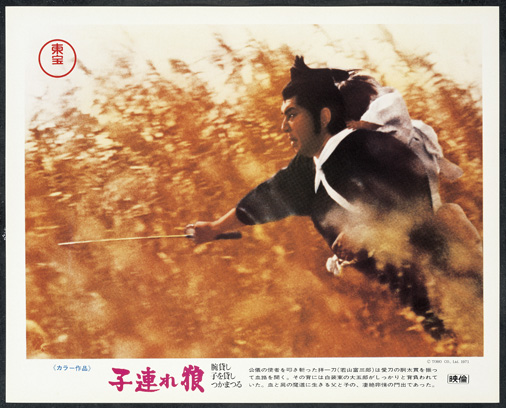 And why not? As one of the original video nasties, Shogun Assassin has proved itself far more enduring than some of its peers. Titles like I Spit On Your Grave (1978) and Cannibal Holocaust (1980) may be well known to the masses, but Shogun Assassin, like The Texas Chainsaw Massacre (1974) and The Evil Dead (1981), is a film that’s forced its way into the mainstream. Among its legion of fans it counts Quentin Tarantino and East-coast Hip-Hop conglomerate The Wu Tan Clan, both of whom have directly referenced the film in their work. In the case of Tarantino it came in the form of Kill Bill Vol. 2 (2004), in which the child of Bill and The Bride watches it at bedtime, as if a grotesque fairytale; and that’s without mentioning the clear influence it had on the hyper-violence of both KB instalments. Before that came the 1995 GZA album 'Liquid Swords', throughout which Wu Tan producer, RZA (who, incidentally, scored the Kill Bill films), places numerous excerpts of the infant’s narration, as well as sampling portions of Lindsay and Lewis’ score.

In both cases we find Shogun Assassin to have meant more to its appropriators than might be credited to your average video nasty. The action and violence can’t be ignored, for the choreography provides some wonderfully blunt and brutal set pieces, but clearly they took more from it than the mere thrill of watching cranium-splitting Katanas (though what a thrill it is). The question is: what? 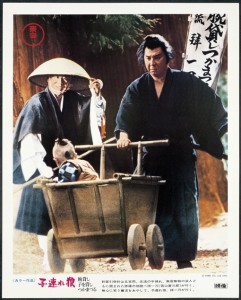 Like many cult films it’s something that’s hard to define. Perhaps what’s most interesting about it is its duality of purpose. It can be viewed as both out-and-out revenge thriller and postulation on the father/son relationship. Most revenge thrillers concern themselves with a single question: how far would you go for vengeance? SA, however, goes further, appending the inquiry of the concerned relationship’s depth, i.e., how far and through what can that bond be maintained? And while other films will generally offer conclusions (even if it’s: to the death), SA does not. It ends on a freeze-frame, the story unresolved, so if there’s an answer at all it’s simply: who knows? Knowing the film’s origins it’s almost foolish to suggest this to be the result of anything other than the production process, the filmmaker’s inability to condense a story spanning six films into a compact 80 minutes. But watch it on its own terms and the effect is quite different. We’re left instead, as one imagines the protagonists are, with the view that vengeance can’t ever be gained, that peace can’t be found and the thirst for blood never be satiated. It’s a bleak conclusion, but one that, despite the film’s fantastical violence, feels far more real and truthful.

There are those, of course, who’ll disagree with this view, people who find SA nothing more than an exploitation of Japanese style. They’ll insist you seek out the originals, that only then can the story of Ogami and Diagoro be truly appreciated. And they’re right, to a point. Certainly you should seek them out; they, too, are a pleasure to watch. But the 'Lone Wolf and Cub' films were far from pure in themselves: with their be-bop/funk soundtracks and gun-housing strollers (see also: killer radishes and Kimonos with ejector seats) they can hardly be called traditional. In reality the series was as much a piece of exploitative filmmaking as its American cousin.

... a master class in mash-up filmmaking

Whatever the view, from a critical standpoint Shogun Assassin provides a master class in mash-up filmmaking, highly relevant in days that see the YouTube community reshaping other people’s work on a daily basis. And for those interested in the subject this Blu-Ray serves as a valuable resource. In addition to what is undoubtedly the finest presentation to date (full restoration from the original prints brings a new warmth and sharpness to the picture), the on board extras house a trove of information. Yes, the interview with Samuel L. Jackson feels decidedly tacked on (it might just as well have been conducted with a regular in your local), but it’s more than made up for by the film’s two audio commentaries, one provided by producer David Weisman, artist Jim Evans and the voice of Diagoro, Gibran Evans, the other by film academic Ric Meyers and martial artist Steve Watson, which provide unique insights into the film’s production and a deeper reading of the content, respectively. If you’re not a fan of Shogun Assassin you most likely won’t be converted, but it you are you’re in luck: it’s the release you've been waiting for.