About the author: Professor Suzie Hanna is Chair of Animation Education at Norwich University College of the Arts and director The Girl Who Would Be God a short animation based on the teenaged journal of Sylvia Plath. She is also a contributor to the forthcoming Cambridge University Press publication Representing Sylvia Plath, edited by Tracy Brain and Sally Bayley. www.suziehanna.com

Leading Plath academic, author and archivist Peter K Steinberg has written a very full, thorough introduction to this excellent collection of audio recordings, giving an in depth and lyrical context for consideration of the CD’s content, commenting that 'the recordings on this CD will add another dimension to our understanding of Sylvia Plath that must be incorporated into our collective memory'.

The compilation is a major Plath publication; it includes previously unreleased material as well as digitally re-mastered recordings of the voices of poets Sylvia Plath and Ted Hughes taken from the BBC and the British Library archives. This is a valuable new resource with great potential use for educators and students at any level, with relevance to a range of studies including American and English literature, journalism, history, drama, media, visual arts and broadcast performance. It provides an intensely thrilling new experience for those who have a serious interest in the work and lives of Plath and Hughes.

It is a particular pleasure to hear Plath compare and review the work of other poets as well as hearing performances of her own poetry with such syllabic clarity. There are twenty-three audio tracks including Plath’s inimitable super-articulate analysis of 'the new spirit at work in American poetry' in 1963 where she recommends that we 'flip through Lowell’s early poems, as fine and wild and rich and stiff as the Animal Room at the Vatican'; and amongst over a dozen poems, there is a live recording of her reading of ‘Tulips’ at the Mermaid Theatre in 1961 and a seamless, almost hypnotic performance of ‘Mushrooms’. 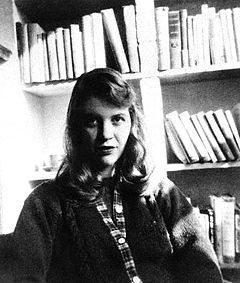 Most of these readings are concisely contextualised by Plath’s illuminating vocal introductions: for instance 'The poem can’t take the place of a plum or an apple, but just as a painting can recreate, by illusion, the dimension it loses by being confined to canvas, so a poem by its own system of illusions can set up a rich and apparently living world within its particular limits'. This ‘living world’ is the key, the poems and the poets are all the more vivid in our minds through hearing such clear authentic authorial delivery. Bearing in mind that these recordings are taken from the period immediately preceding Plath’s suicide, any notions about Plath sounding like a victim are banished by her confident and controlled delivery, and her latent laconic wit. In her introduction to her poem ‘Spinster’ she says ; 'She would prefer, if she had the choice, a picture or a painting of the sea rather than the sea itself, because she finds motion untidiness and chaos too upsetting'.

A classic recording of Plath and Hughes being interviewed by Owen Leeming in 1961 invites consideration of the way they presented their romantic, domestic and creative roles to the public, and through the lens of time this plays uncomfortably to modern sensibilities, particularly in the light of known tragedy; Sylvia says 'We’re dreaming of a house where I can shout for Ted from one end to the other and he won’t be able to hear me'.

Previously I have only accessed recordings of Plath’s voice online through resources such as the BBC website and Poetry Archive, and I have no doubt that this CD will find an enthusiastic audience due to its sonic quality, original content and the continuing international academic and lifestyle relevance of all things Plath.

There are already two acclaimed CDs in The Spoken Word series featuring the voice of Ted Hughes including his ‘Poems and Short Stories’ and ‘Poetry in the Making’. This new addition to the family archive is likely to prove the most interesting and revealing, and will no doubt form the basis for more scholarly analysis and comment.

Professor Suzie Hanna is Chair of Animation Education at Norwich University College of the Arts and director The Girl Who Would Be God a short animation based on the teenaged journal of Sylvia Plath. She is also a contributor to the forthcoming Cambridge University Press publication Representing Sylvia Plath, edited by Tracy Brain and Sally Bayley www.suziehanna.com