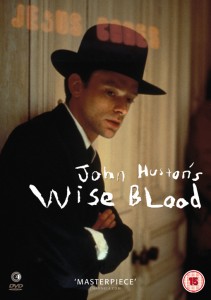 About the reviewer: Dr Miles Booy was awarded his PhD by the University of East Anglia for his work on questions of authority in the representation of Christ in film. He is the author of Love and Monsters: The Doctor Who Experience, 1979 to the Present (IB Tauris, 2012) and his other publications include contributions to The Cult TV Book (2010).

Hazel Motes (Brad Dourif) returns from military service to a strange version of the American South where vintage and modern co-exist, with poverty and desperation the only constants.  Repelled by sex and salvation, but yearning for them in equal measure, his disgust at the cultural obsession with Jesus (the name is used so constantly in dialogue as to lose all meaning), Motes forms the ‘Church without Christ.’  However, he is a naive innocent in a marketplace where an itinerant preacher must compete with consumer durables and King Kong-style movies about a rampaging mountain gorilla, and can’t even stop his message being appropriated by shyster evangelists more used to opportunistically preaching Christ crucified.  Hazel’s mental landscape is tied to his car.  Indeed, ‘Nobody with a good car ever needs to be justified,’ is the novel’s cult line, but Hazel’s car is a wreck, and upon its final destruction his energies turn terribly inward.  He blinds himself with lime and wraps his torso in barbed wire.

In its day, Wise Blood (1979) was the epitome of a cult classic, playing at festivals to rave reviews, but struggling to find a distributor. A decade later, ‘American Independent Cinema’ was a marketable niche (one where Dourif and co-star Harry Dean Stanton had some traction), and from this perspective the film, with its small town oddball characters, its sexual yearnings, regional filming, and its extreme psychologies seems much more accessible (in 1989, ‘Lynchian’ would have been the lazy journalistic/marketing summary). Culturally, the conservative Christianity, which perhaps appeared to be dying out in 1979, has vigorously re-asserted itself, and the question of extreme responses to religious messages is now one of world-historical urgency. Once these trends had occurred, Wise Blood’s co-scriptwriter, Benedict Fitzgerald would find a significantly greater audience as co-writer of The Passion of the Christ (2004).

The DVD’s extras – four interviews with stars and scriptwriters amounting to seventy-two minutes of material - take up most of these points, but filtered through the memories of filming. Dourif interprets the film’s final third in terms of novelist Flannery O’Connor’s apparent intentions: a Catholic writing about what a saint might look like if he emerged from the background of American Protestantism. Indeed, memories of O’Connor, and the need to remain true to her vision, however odd it might seem in the modern world (the book was first published in 1952), are a prominent part of everyone’s recollections, so those wishing to view/teach the film as an adaptation of a literary classic will find rich pickings. The word ‘grotesque’ is often used to describe O’Connor’s characters, but everyone involved seems to have been devoted to treating them as real people. For Dourif, this crystallizes around his disagreements with director John Huston about how Motes’ final psychological shift should be played – delusional or authentically spiritual? Huston himself emerges from these recollections as someone happy to discuss the big cultural questions of the script with his cast, but less interested in giving them specific advice on playing particular moments.  ‘Acting’s a cinch,’ he told Fitzgerald, so that’s that then.

So, an overlooked film gets its DVD release with enlightening, if plain and clearly inexpensively shot, extras. Wise Blood the film is an accessible way into a daunting novel and a welcome corrective to those who think American Independent Cinema began in the mid-eighties.