Over 50% of people displaced in the world today are children (under 18) but rarely do the media or political discourse address the magnitude, complexity and diversity of their experiences. All too often child migrants are classified as vulnerable or victim and without agency or along such binary classifications as innocent or evil.

The website www.childmigrantstories.com and short films https://childmigrantstories.com/films/, co-produced with child migrants, attempt to produce a counter narrative. They draw on my PhD on Child Migration to East London: Life stories of departure, arrival and settlement, a collaboration between Queen Mary University of London and V&A Museum of Childhood. For this I have interviewed 35 people who have come to East London from across the world under the age of 18 from 1930 to the present day. This includes children who have come on their own and in the context of family migration. The website includes profiles of those interviewed along with people’s portraits. A minority chose not to have their photograph on the website and/or to be anonymous – one chose a pseudonym. For ten of the participants I have developed Spotlight Stories illustrating excerpts from their oral histories, brought to life with audio excerpts on SoundCloud and with images. All input was checked by participants for their approval.

“Voices Past and Present”, the first film to be produced, draws on quotes from 17 participants that illustrate some of the main themes of the research - departure, journeys, settlement and impact on later life. The audio selections were enhanced by images provided by the participants and from other sources. The musical tracks, There isn’t any Place to Live for the Refugees and My Life, are original compositions by Henry Bran, one of the interviewees. He died soon after the second interview but his daughters gave permission for his music to be used. All films draw from the personal testimonies, with the voice of the interviewer edited out, thus foregrounding the child migrant as narrator.

Three subsequent films were based on individual stories – “Passing Tides” about Linh Vu who escaped Vietnam with her father by boat;“Ugwumpiti” about Maurice Nwokeji who survived famine and bombs during the Biafra war and “Life is a Destiny” about Argun Imamzade who saved his photo album from his bombed out house in Cyprus. The subject matter was chosen not only because of the power of the individual stories, but also because of the opportunity to use Linh’s artistic skills, Maurice’s music and Argun’s family photo album.

We supplemented the audio interviews with additional film material. We returned with Linh and her father to Thorney Island, where they had stayed in a refugee camp on arrival in the UK. We also filmed Linh illustrating key events such as her escape by boat.

We filmed Maurice outside his first house in Hackney and at his primary school. His reggae music, inspired by his experiences in Biafra, provided the soundtrack. Argun invited us to film at his house. This provided a spontaneous opportunity to interview his wife and grandchildren who were asked what they would rescue if they had to leave their house in a hurry. Two further films were produced for the CritiQues Project on Refugee Children and Home using relevant quotes and illustrating these with still images, film footage and music. “The House that is not There” focuses on Henry Bran’s return to his home in El Salvador and was animated by his daughter, Gabriela.

The films, using only an iPhone, were produced and edited by myself and Mitchell Harris, a film graduate from QMUL and who now runs Pocket Blockbuster.

Since 2016 the website and films have also been accessed by over 30,000 people online. The films have been screened in over 60 venues - in museums, galleries, cinemas, restaurants, colleges, schools, universities, hospitals, community and refugee centres, at festivals and conferences.

“Passing Tides” screened in Linh’s Vietnamese restaurant screenings have generally been followed by Q&As performances or readings with, and by, child migrants.

“Ugwumpiti” was nominated as Research Film of the Year by AHRC/BAFTA 2017 and the whole project was awarded QMUL’s Centre for Public Engagement Interact Award 2017.

One of the most interesting aspects of the development of “Child Migrant Stories” has been the responses of different audiences. People of all ages, from six upwards, have responded emotionally to the personal narratives, but the films have also engaged people on a more informative and detached level through reference to historical and political context. Audiences, with few prompts, have also linked the historical aspects of migration, in such films as “Ugwmpiti” and “Passing Tides”, with the contemporary crisis of child migration.

For three years, Hackney Museum has used the films and related material for their Refugee Week schools programme. One 11-year-old child wrote of the session, ‘We’re happily living our lives with our Playstations and mobile phones. I’ve got everything handed to me on a plate, but not everyone has that and it’s important to remember that’. A year 6 teacher remarked, ‘The workshop at the museum helps them to see the “refugee” as a person with a story and not a number, statistic or news story’. Hackney Museum staff found that the introductory film, in particular, resonated with children’s lives: ‘Children have been able to compare the stories on the screen to their own family’s journey, and have been so excited to see places they recognise on the big screen’. At the beginning of the workshop the children had written in faint pen what they knew about refugees. At the end they wrote in darker pen what they had learnt.

This was used as the basis of an evaluation of the programme by Ioanna Korfiati. This pointed to two significant areas where the two-hour session had had an impact, one being in relation to child migrants’ agency and resilience, and the other to concepts of social justice:

Korfiati makes two further points. Firstly that, although a two-hour session cannot transform attitudes and perceptions that have developed over time, it can provide a starting point for further discussion. To this end we have developed learning resources for school students linked to four of the films https://childmigrantstories.com/learning-resources/schools. The second is the importance of similar learning programmes in areas where there is less diversity and tolerance of different ethnicities and cultures. This echoed feedback we had received after the film screening on the Floating Cinema about future developments: ‘More films, a road show, take it to …. areas that are less diverse’. We have recently procured a small grant to organise screenings outside London.

The films resonate particularly powerfully with those communities who have shared aspects of the life stories featured in the films. Over a 100 people, who had either experienced the Biafra war themselves or had relatives who had experienced it, attended a screening of “Ugwumpiti” to mark 50 years since the Biafra civil war at a SOAS conference in 2017. The Q&A with Maurice developed into a space where people felt moved to share their own, or their relatives’, experience of war, perhaps for the first time. Sons or daughters felt they were also victims as parents had been reluctant to share their experiences – as with children of parents who were Holocaust survivors and who consequently suffered secondary traumatisation (Moro, 2005; Wiese, 2010). The level of denial of what happened during the Biafra crisis, and the political tensions still prevalent in Nigeria, contribute to this conspiracy of silence. The film screenings and Q&As were important as a way of bearing testimony. They stimulated intergenerational discussions and seemed to act as a cathartic release.

Humour alongside sadness, proved to be a powerful tool in helping people re-engage with memories of trauma. Maurice’s accounts of being offered chocolate and cheese – “I much preferred roasted rat” – after living on snakes and cornmeal during the Biafran war has both amused and horrified audiences. The light touch enabled another child from the Biafra war to revisit her experience:

‘Your story-telling ability – your factual realness and ability to still laugh has created the possibility for revisiting subliminal traumas... I was 9 years in 1967 and my heart still aches for children all over who are forced to go through what we went through.” (Child Migrants Stories website)

The experience of war, told from a child’s perspective, seemed to be more palatable than that told by an adult with a particular political viewpoint.

The production and screening of the films has impacted significantly on Linh, Maurice, Argun and their families. Maurice is explicit about the reparative aspect: ‘I found it a very healing experience’. This has not always been with the support of those around them. Maurice’s brother, for example, for whom he scavenged food during the war, refuses to watch the film. Linh, Maurice and Argun have all participated in Q&As after screenings. Linh’s daughter now understands her mother’s fear of water. Argun’s wife was surprised at what her husband shared as he had never told her about his initial reception by his mother and stepfather. Argun’s grown up children love the film, his son commenting, ‘Argun’s story is humorous as well as moving. Bittersweet’.

“Child Migrants Welcome?” is a development of “Child Migrant Stories” in that it examines the experiences of welcome, both from the perspective of child migrants across the UK and of those who know or care for them. On the basis of this we have produced a further four films: “Seeking Sanctuary on a Scottish Island” about the experiences of Syrian children and their primary school teachers on the Isle of Bute in Scotland; “I am Well Here” about mainly unaccompanied young migrants who attend the Norwich International Youth Project and “I Don’t Understand Scones” about child migrants who attend Sidmouth College secondary school in Devon. 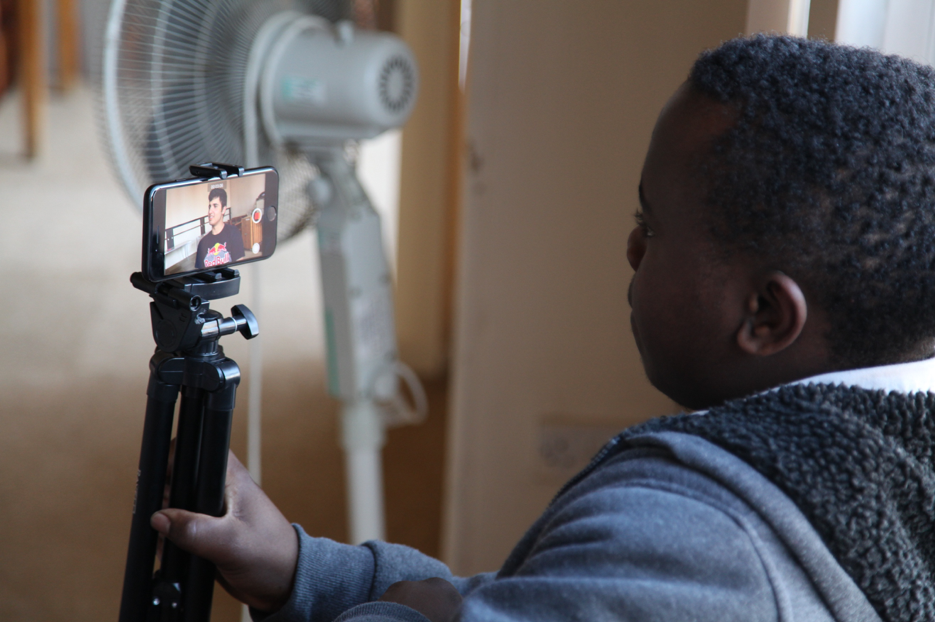 Young people film each other at Norwich International Youth Project

Only the last of the three is accessible on the website but the other two can be screened, on request, under certain conditions. ““Child Migrants Welcome?” is the third and longest film of the series. The incorporation of the views of lawyers, activists and politicians, alongside child migrants, has provided the opportunity to explore the political, legal and social care aspects of how the state welcomes (or fails to welcome) unaccompanied child migrants. Film screenings have been linked to the 80th anniversary of the Kindertransport as well as to the nationwide campaign, “Our Turn” to increase the number of unaccompanied children cared for by local boroughs to 10,000 over the next 10 years. This is spearheaded by Safe Passage and Lord Dubs who, himself, came over on the Kindertransport.

“Child Migrants Welcome?” has also been screened at Hackney Museum, organised with Hackney Social Services, to encourage people to foster unaccompanied child migrants. The inclusion of a therapist’s viewpoint has stimulated discussion with mental health practitioners and other professionals about how to support the resilience of migrant children who have experienced trauma. The project, thus, has a clear link with social justice and human rights campaigns.

Eithne Nightingale has just completed a PHD in Child Migration to East London: Life stories of departure, arrival and settlement. This was an AHRC funded collaborative doctorate between the School of Geography, Queen Mary University of London and the V&A Museum of Childhood in Bethnal Green. Eithne is also a, writer (travel, memoir and fiction), storyteller and photographer. She writes travel articles regularly for the Australian newspaper and has also written for the Sydney Herald, Independent on Sunday and Elle.

Korfiati, I. (2016) Learning from child migrant stories: exploring the impact school sessions at the Hackney museum have on Year 6 pupils’ understanding of the refugee experience. Unpublished MA Thesis. London: UCL Institute of Education.