In January 2019 Jonas Mekas crossed the ultimate border at the age of 96. Throughout his life, he had traversed many other physical, metaphorical and semantic borders. From his Lithuanian birthplace up to Manhattan in New York, where he lived most of his life, Mekas crossed (and even transgressed) languages, territories, media forms and aesthetic registers, as beautifully documented in all his oeuvre and in his photo-book-memoir, Dance with Fred Astaire (2017). Upon his departure, critics and friends celebrated his life and work with articles and obituaries, all appraising the richness of the legacies he left in so many fields: experimental filmmaking, poetry, criticism, film archiving and preservation and, by extension, film education – only to name a few.

Mekas left us during the ongoing crisis of refugees fleeing from Syria, the magnitude of which can be compared to the post-Second World War state of affairs that Mekas experienced at first hand as a displaced person. It is worth noting here that Mekas never identified himself as an immigrant, but as a refugee. Brought to the US by the UN Refugee Organisation, Mekas saw this situation as distinct from the experience of economic immigration of, say, the Italian community of New York. Being a refugee meant being uprooted, forcibly losing the ties with the land of his Lithuanian village, as Mekas himself narrates in this clip:

Hailed as the pioneer of the diary film and the subjective voice, criticism and scholarship have constructed the portrait of the artist around the ‘Mekas on Mekas’ type of discourse. Inevitably so, one would argue, since Mekas rendered the documentation of his own life into evocative autobiographical audiovisual poems. He even unashamedly strove to do the ineffable: ‘to film his soul’, as he would put it.

The camera became the life-saving boat that allowed him to cross the borders of communication upon his arrival in New York with very little knowledge of the English language. In turn, his filmic ‘auto-fiction’ avant la lettre allowed his contemporaries and future viewers to join his journey, to become passengers and to cross borders ‘with’ Mekas. The meditative timbre of his accented voice-over narration exteriorises the subjective experience into a cinematic journey that we the audience are invited to join and ride along. Thanks to his wholehearted embrace of the digital form and technology, he made large parts of his audiovisual archives accessible to his diverse audiences. His thoughtfully curated website http://jonasmekas.com pulls together many threads of his work and guides us to explore the experience of this refugee filmmaker across media borders. http://jonasmekas.com/pieces/ 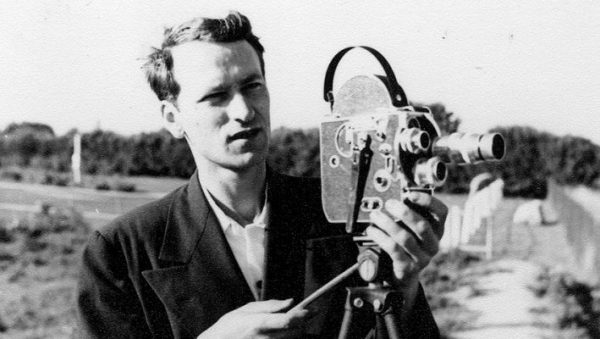 Future generations of film students, teachers, scholars and critics are yet to discover this treasure trove of Mekas’s rich, yet displaced, life on screen. These online pieces, fragments and anecdotes, alongside his published films on DVD, build a unique audiovisual palimpsest of a life in flux and constant creative exploration of people, places and spaces.