When The Woman in the Story: Writing Memorable Female Characters was first published in 2010, I was surprised by the positive reception to the book from a very wide range of readers; not only screenwriters like me, but directors, producers, script development execs, film funding bodies, script development agencies, fiction writers, and academics and students too. The book was clearly overdue, plugging a glaring gap on many a writer’s bookshelf – a screenwriting guide based on the premise that representing gender is an important consideration as conflict, dialogue, complex themes, and all the other screenwriting hallmarks of a ‘good script.’ To me, as both a writer and educator, gender is not simply a defining characteristic like age, sexuality class or profession. Gender intersects with all these and goes further – it can affect the character’s journey, the tone, the themes, the functions of secondary and minor characters, the way conflict operates dramatically. The ‘gaze’ and ideological values of the writer concerning gender will infuse most narrative elements.

Other screenwriting books have ignored gender, with an implicit assumption gender is somehow subordinate to the dramaturgical principles of story that were enshrined by Aristotle, made universal by Joseph Campbell, and commercialised by Hollywood. The white male gaze dominating Hollywood motion picture production has privileged for decades movies that feature white male heroes, or female driven movies that meet the approval of the white male gaze (industry and critics). Until The Woman in the Story’s arrival, screenwriters had little choice but gender-blind screenwriting books, dominated by case studies largely featuring male protagonists. 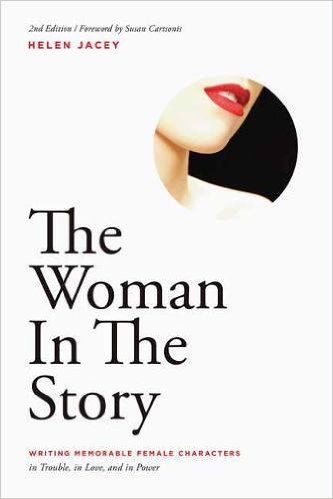 When writers choose a female protagonist, they inevitably are confronted with a whole range of choices that require them to confront their own beliefs about the situation of women in society, and to what extent they want their character – and their screenplay – to reflect these.

Or they should be. Female characters and their representation have been in a marked state of flux since moving image began, reflecting the changes in women’s lives, changes that are culturally, socially, politically, and economically specific. Writers need to be aware of their own values, their own unconscious biases, behind their creative choices, if they want to ensure their characters reflect their own values and attitudes. And if those values prove to be sexist or misogynistic, they need to understand why these are offensive and can ultimately be not only harmful to audiences, but their own careers as writers in a media culture that is finally growing aware and intolerant of harmful stereotypes. Write who you want to see, is my story mantra.

During a century of evolving female character representation, more recently the gender of the creator has also been under the microscope. Who after all has been responsible for (sometimes monstrous) female stereotypes on screen that most women can’t relate to? Countless studies have revealed that when women are behind the camera as writer, director and producer, very different stories are told.

Screenwriting students respond well to the exercises in The Woman in the Story that challenge them to ask why. Why as creators are they making these choices about women and men? While media theory, feminist film studies and even feminist literary studies provide useful frameworks to help students contextualise their processes around gender, often student writers find specific books that speak more directly to their practice and experience of writing and the act of creativity – far more relevant.

The principles and concepts in The Woman in the Story are inspired by so many factors: from my own lived experiences and feminist values, from my writing process and the uncanny role of the imagination, from my own experience of script development in the industry as a writer, from critical feminist theory (Jungian, Anglo America and French models of psychoanalytical, film and literary theories), from my prior work with vulnerable families, from film analysis of international movies and shows (not just those out of Hollywood). It isn’t a user-friendly translation of any particular theory, it is a holistic set of principles aiming to reflect the complexity of creative inspiration in screenwriting. 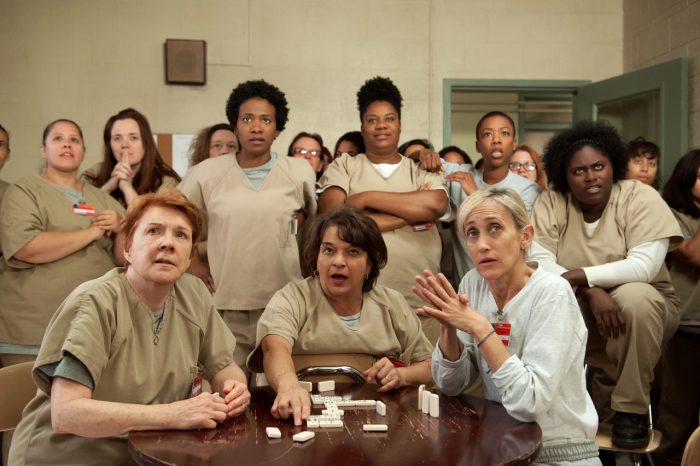 Orange is The New Black, Netflix

One principle from the book that is hugely popular with professional writers and students is the concept of the Composite Heroine. In the script development process, a character is conceived, often, initially by one writer, but is in fact raised and shaped by a village, comprising producers, directors, script editors, readers. The heroine of the final draft is a composite of all these individuals’ projections and desires for the character; their own commercial agendas and their own unconscious bias about women (which could span from feminist to misogynist). The concept of a ‘composite heroine’ asks writers to brainstorm all the possible influences behind their female character, from their own lived experience, their values and attitudes to feminism, to professional discussions and how they feel an actor would bring the character to life. For students, this kind of brainstorming can include feedback from peers, experiences in collaboration, and critical feedback from tutors.

Inspiring students to break stereotypes and push the boundaries of female representation can be easily achieved by the wealth of female leads on screen today. The following films and TV shows would be on my favourite screenwriting course viewing list: Orange is the New Black, Call My Agent (the French version with a multitude of older women characters), Godless, Russian Doll, The Handmaid’s Tale, Unbelievable, Harriet, and Watchmen.

Case studies from different decades can be really useful to exemplify the flux of female characterisation, and how representations change. The relatively recent rise of the action heroine and the female psychopath (Killing Eve) show how flipping the gender and ethnicity of the protagonist revitalise tired male protagonist-dominated genres. A character like Annaliese Keating (played by Viola Davis) in How to Get Away with Murder, takes the courtroom drama into new terrain. Annaliese, a black middle-aged woman is a tortured genius, and guru to a mixed group of young law students. Personally, Annaliese’ backstory includes child abuse, racism, death of her own child, and solace in a lesbian relationship. Professionally, Annaliese is motivated to challenge the institutional racism of the US criminal justice system and widespread incarceration of black people. 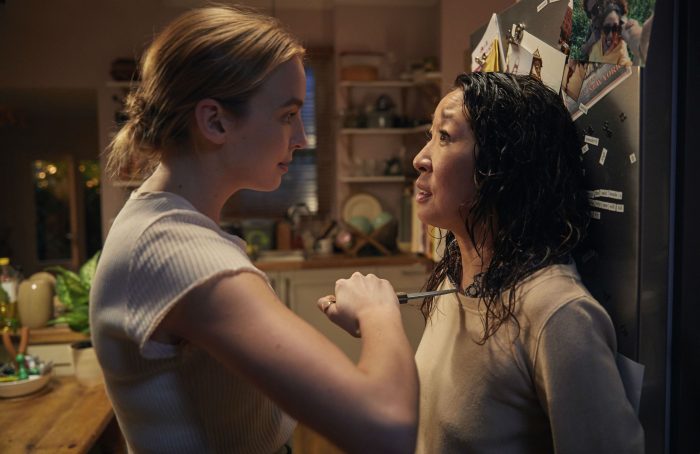 Asking students to analyse characters in case studies in terms of gender, race, age, ability, class and socio-economic factors can help them unpack their own storyworlds. My concept of ‘Feminine Superthemes’ is a great favourite with students who want to untangle how their character’s identity is impacted by the culture and political system they live in. The Handmaid’s Tale, with its past and present complex linear structure, of the trauma of a repressive patriarchal social order on female characters. The series reflects the Superthemes of ‘Familiar Femininity’ with ‘Fighting Femininity’.

Conversely, the ‘colour blind’ casting of a series like Bridgerton, asks screenwriters to question the mandate of authenticity in historical narratives and how and when we can reject it, and still be progressive. To demonstrate how I as a creative have put some of my principles into practice, I often refer to my own creation of heroine Elvira Slate, a subversive protagonist who revitalises and spins the macho canon of 1940s crime noir and its tradition of cynical loner detectives, for feminist-minded audiences.

Preparing screenwriting students for the rigours of industry and current debates and mandates is vital. In my own experience as a screenwriter for over 20 years, and a trainer and teacher for half that time, female protagonists can be subjected to far more scrutiny in terms of behaviour, lifestyle, choices not to mention age and physical attractiveness than their male counterparts. Pointing students in the direction of all the media industry campaigning groups and research organisations such as WFTV, Women in Hollywood, Times Up UK, The Writers Guild, The Black Writers’ Guild, Centre for the Study of Women in Film and Television, and others will grow their awareness of initiatives which push for change.

Decolonising the curriculum needs to go hand in hand with an intersectional oversight that includes films and shows that are diverse in terms of gender, age, class, disability, and LGBTQ concerns. Unconscious bias about what makes a classic movie can still today be evident in recommended viewing lists containing majority of movies by written and directed by men.

Ironically, I hope that The Woman in the Story becomes redundant in time, but the second edition came out in 2017, and still is utilized heavily by writers and remains a key reference book in universities. If the book empowers writers to create a female character as free of stereotyping or unconscious bias as possible, then it has done its job.

Helen Jacey is the founder of Shedunnit Productions, and the creator of the Elvira Slate Investigations 1940s feminist detective series. After gaining a PhD in Screenwriting from the University of the Arts London in 2010, Helen has written extensively on gender, representation and the script development process. Her book The Woman in the Story: Creating Memorable Female Characters is the industry go-to resource about writing female protagonists. Helen has worked extensively in the international film industry as a writer, content creator, story consultant and trainer, and frequently gives seminars, masterclasses, keynotes and interviews for script development organisations and federal film agencies. For many years, Helen has taught screenwriting and creative writing at several UK universities.