Home Viewfinder MagazineMadness in Through a Glass Darkly

Ingmar Bergman’s Through a Glass Darkly’s (1961) primary concern, as Robin Wood stated in his seminal book on the director, is a woman named Karin (Harriet Andersson) and her ‘madness’ (1969, 108). The sequence this article seeks to dissect serves as the climax of the film, the boiling point at which Karin’s madness reveals itself in a hallucination of a ‘Spider-God’. Marc Gervais reads this sequence as ‘Karin’s imagined final sexual assault by the Spider-God’ (1999, 75) and this analysis will take this reading and apply to it the further argument that the ‘Spider-God’ represents Karin’s internal fear of the patriarchal society that questions her sanity. The term ‘madness’ here will be approached through Rosmarie Garland-Thomson’s feminist understandings of the notion of ‘misfits’ (2011).

As the only woman in her family, Karin is a ‘misfit’ in the patriarchal space of the home. Masculine figures around her not only label her as ‘mad’ but are the very root of the madness itself. Linda Williams suggests that ‘Ingmar Bergman regularly used sexual representations to dramatize existential angst’ (1996, 491), and indeed, Through a Glass Darkly makes use of imagery that connotes sexual assault in order to expose the madness placed upon a woman who does not ‘fit’ into the patriarchal space she inhabits. The psychological threat of sexual assault serves as a method used by Karin’s family to contain her madness, whilst simultaneously acting as the very cause of it because her madness is triggered by a fear of patriarchal oppressiveness which is embodied in a symbol of sexual assault in the ‘Spider-God’. 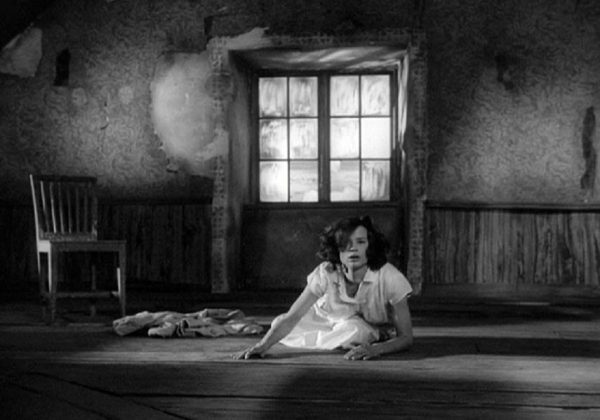 Allen Thiher notes that, in literature, the perception of madness often stems from a sense of otherness in an individual (1999, 25), and the relationship between the costume and set design of this sequence highlight Karin’s status as a ‘misfit’. Rosmarie Garland-Thomson argues that the ‘misfit’ status of such people as ‘the mad’ is ‘literal when the shape and function of their bodies comes into conflict with the shape and stuff of the built world’ (2011, 594). Indeed, Karin’s body does not ‘fit’ into the ‘stuff’ of the family home. The walls of the house are dark and dirty, the wallpaper is torn, and wooden panels are broken. The costumes of Karin’s father, David (Gunnar Björnstrand) and husband, Martin (Max von Sydow) are also dark and worn, the clothes they wear ‘fit’ into the space they inhabit thus establishing their dominance as they are the ‘uniform, standard, majority bodies’ (Garland-Thomson, 2011, 595) of the space of the home.

The home is thus a patriarchal space dominated by men. On the other hand, Karin wears a white, clean dress that is almost clinical in design, creating an image reminiscent of a hospital patient, evoking the sense she has been branded as ill. This is a stark juxtaposition to both the costume design of her male authoritative figures and the set design of the sequence. Additionally, the dress also reveals – at least in the heteronormative society Karin lives in – her body as female. Karin’s costume design serves to instil the idea that her body does not ‘fit’ into the masculine space of the home, she is therefore a ‘misfit’ and hence mad.

The mise-en-scène therefore exudes the perception of madness placed upon Karin by her patriarchal family. However, camera movement and lighting within the sequence reveal the actual source of her madness. One pan shot begins with Martin sat in a chair ‘fitting’ in with the space of the home. His shadow is cast onto the wall which matches his clothing, further cementing his integration with the space. Karin, on the other hand, is stood with her shadow cast against the window, a symbol which not only foreshadows Karin’s imminent expulsion from the home, but also positions her in a space where her and her madness are being looked at by Martin. This pan becomes motivated when Karin kneels to pray to God, who she hopes will reveal himself through the door.

Lawrence D. Smith argues that Bergman’s films often involve ‘a search for identity on the part of a female protagonist’ (2011, 102) and indeed this pan has the camera literally seeking for Karin’s escape from patriarchy. However, the pan reveals the shadow of David cast against the doorframe, suggesting the God she searches for is in fact her father. Roy Porter defines the perception of religious madness as the ‘belief in the existence of supernatural intervention in human affairs’ (2002, 31). Karin’s madness is prompted by the realisation that her psyche has disguised her patriarchal oppressor as an interventional God that does not exist, and this idea is communicated through the movement of the camera. 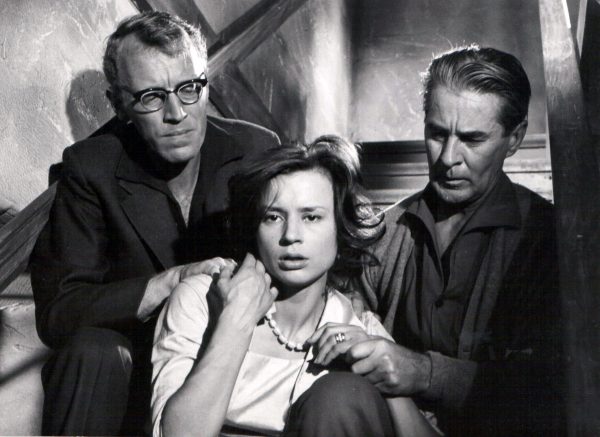 Christina Boyles would appear to support this reading, arguing that ‘Bergman reveals that God is not only absent, but any notion of him that his insightful characters may have is monstrous’ (2014, 23), and Karin’s notion of God is revealed to be the hallucination of a monstrous spider. Karin screams and recoils into the corner of the room when she begins to hallucinate the ‘Spider-God’ which then, as Frank Gado argues, ‘attempts to penetrate her and suck her’ (1986, 27). Gado’s reading here links with that of Gervais’ as the actions of penetrating and sucking imply the image of rape, an act Gervais argues the ‘Spider-God’ symbolises. However, the actions of Martin and David are comparable to that of the ‘Spider-God’, further suggesting their presence as the cause of Karin’s madness.

The end of the sequence sees Karin being forced to the ground by David and her brother (Lars Passgård) and Martin uses a syringe to sedate her. The syringe is perhaps a ‘phallic symbol of power derived from a metaphorical association with the real erect penis’ (Linstead and Maréchal, 2015, 1464), and the image of the needle non-consensually penetrating Karin’s skin can be connoted with rape. The sedative even squirts from the needle, suggesting an image of ejaculation and signalling the completion of the rape as Karin and her madness has been contained by her patriarchal figures. What is interesting to note is, at the time of the film’s production in the early 1960s, Western societies ‘were taught to view the normal female response to sexual violence, including incest, as a psychiatric illness’ (Chesler, 2018, 1). Perhaps what Bergman is suggesting here, with the use of symbolism in the ‘Spider-God’ and the phallic needle, is that Karin’s family’s patriarchal attempts to contain her madness, is the very cause of her madness in the first place.

The marriage of sound and image to create meaning also contributes to this notion of patriarchal methods of dealing with madness as causes of madness. The image of the door opening to reveal the ‘Spider-God’ is accompanied by the sound of helicopter rotors spinning. The helicopter is the mode in which Karin, the ‘misfit’, is being expelled from the home, much like how the cities of Europe expelled their madmen using ships in the middle-ages (Foucault, 2001, 6). The occurrence of this sound alongside the opening of the door suggests that this method of handling madness has spawned the hallucination of the ‘Spider-God’ which induces Karin’s madness. A close-up shot of the window reveals the silhouette of the helicopter. The appearance of the helicopter once again creates a phallic image, with its landing-pads being long and cylindrical and the tail rotor protruding out of the fuselage at an erect angle, thus solidifying its position as an agent of the patriarchy summoned by Karin’s father. Because the camera is viewing the helicopter through the window, the space Karin’s shadow also occupies, an association between Karin’s body and the method of madness management can be made. Karin’s body does not ‘fit’ the space of the home but does ‘fit’ the space of the helicopter, the space that confirms her madness. The sound of the helicopter, and the composition of the shot that reveals it, suggests that it is yet another patriarchal method of dealing with madness that concurrently spawns madness. But these audio-visual conventions also insinuate that the helicopter is the only space in which Karin’s madness can ‘fit’ as it is not fixed to the patriarchal society of her home.

‘Bergman’s films are not solely liberatory; rather, their depiction of women is highly nuanced to reflect the struggle of establishing a feminine ontological self as in a patriarchal world’ (Boyles, 2014, 19), and this sequence from Through a Glass Darkly encapsulates this notion with the concept of madness. Karin’s ‘struggle’ and ‘search’ for identity in the patriarchal space of her home makes her a ‘misfit’, which the mise-en-scene of the sequence indicates. Her perception as a ‘misfit’ by her masculine family in turn places upon her the label of madness. However, Bergman’s employment of such audio-visual techniques as camera movement, composition, and lighting as well as symbolic and psychoanalytic imagery reveal a more complex representation of madness.

Gervais’ proposition of the ‘Spider-God’ symbolising a sexual assailant becomes more layered when its relationship to the male family members is explored. The ‘Spider-God’ is the psychological symbol of the patriarchy’s attempts to contain madness through the masculine reassertion of dominance through sexual violence, and it is the men of her family who physically carry out this reassertion of dominance, thus merging the two entities together. Bergman has perhaps illustrated a cycle of madness that has been imposed upon Karin by the patriarchal household that perceives her as a mad ‘misfit’, and her maddening fear of masculine oppression which ironically aims to contain the very madness it creates.

Tom Durrans is a research student studying for an MA in Media & Cultural Studies at the University of Lincoln. My thesis aims to understand how cultural attitudes towards motherhood and masculinity relate to the construction of ‘evil’ in the films of Lynne Ramsay. He is Senior Programmer for Indie-Lincs International Film Festival and has written for the Lincoln Film Society.

Foucault, M. (2001) Madness and Civilization: A History of Insanity in the Age of Reason. London and New York: Routledge.

Thiher, A. (1999) Revels in Madness: Insanity in Medicine and Literature. Michigan: The University of Michigan Press.