Beckett’s plays written or adapted for British television during the author’s lifetime were rarely screened in drama slots but instead in arts series on BBC2. It was under the auspices of Arena in 1982 that BBC’s most significant Beckett season was broadcast, in December of that year. Arena had not commissioned any of the productions, drawing instead on recordings previously made for BBC, showing a film acquired from the USA and a Beckett drama made for German television. All but one of the programmes in the season was briefly introduced by the critic and BBC drama producer Martin Esslin (Fig. 1), but these were not original arts documentaries of the kind normally made for Arena. The Beckett season offers interesting insights into how the remit of Arena could accommodate different kinds of curation and presentation within the genre of arts programming. 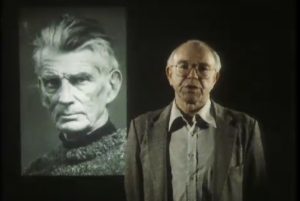 The Beckett season started on Saturday 11 December 1982 with the full-length play Happy Days, shot at the Royal Court Theatre, in 1979. Billie Whitelaw featured as Winnie, buried up to her waist and then to her neck in a mound of earth but blithely carrying on with her daily routine. On the following Monday, Beckett’s first play written specifically for television, Eh Joe, was screened. This was a twenty-minute monochrome videotape production from 1966, in which Jack MacGowran gave a wordless performance as a man tortured by a voice that might or might not come from within his mind.

Tuesday featured Arena’s screening of a 1982 film by US Direct Cinema filmmakers D. A. Pennebaker and Chris Hegedus, that documented the preparations for, and then the performance of, Beckett’s Rockaby at a theatre festival in Buffalo, New York. Much of the film shows American director Alan Schneider’s often intimate discussions with the play’s sole performer, Billie Whitelaw, in her London house. On Wednesday 15 December, the short theatre piece Not I, adapted for television in 1975 from its Royal Court Theatre production, continued the season. In this monochrome filmed adaptation, only Whitelaw’s mouth can be seen, in the centre of a black screen, speaking an anguished stream of consciousness monologue. 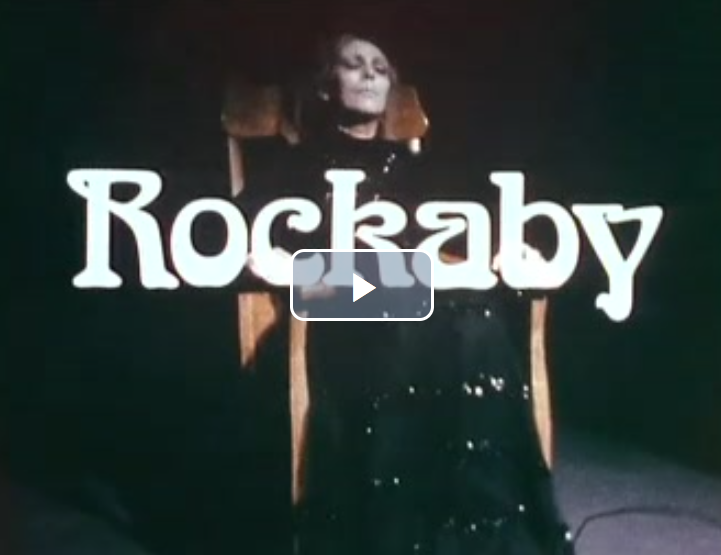 Not I was followed on Thursday by the most recently made of Arena’s selection of Beckett’s work, Quad, a play for television acquired from the German broadcaster Süddeutscher Rundfunk that had been written and shot just months before. It has no dialogue and consists of robed figures walking along the outlines of a rectangular shape marked out on the floor of a darkened studio. The short season concluded on Friday 17 December with a BBC version of Beckett’s play Krapp’s Last Tape, originally made for BBC’s drama strand Thirty Minute Theatre in 1972. Patrick Magee plays an elderly man revisiting on his birthday the audio recordings he had made in previous years, reflecting on his past selves.

Grouping the plays across a week in this way gave coherence to a selection of materials deriving from various sources and originating at different times from the mid-1960s to the early 1980s. The season became, in effect, a retrospective look across some of Beckett’s better-known, but also most challenging, work on screen. In their original broadcast forms, Beckett’s dramas had been outside the normal seasonal planning and scheduling of British television, in as much as, with the exception of Krapp’s Last Tape, they sat outside the anthology series in which most original and adapted plays were made (for example the BBC’s Play for Today or Play of the Month strands, respectively). However, Beckett’s work was attached in publicity material, such as Radio Times features and listings, both to Beckett the famous theatre playwright and to the reputations of the famous actors who appeared in it. This was drama on television, but not in a television drama context.

One of the attractions of the Arena season was that it showcased British theatre culture, with connections to Europe and the USA through Beckett’s status as Irish by birth, a resident of Paris, and an international figure attracting overseas directors and actors to realise his work. In his brief introductory talks prefacing the season’s programmes, Esslin explained details of Beckett’s biography, his interest in theatre directing and working with actors on his own plays, and the impact that his enigmatic dramas had had on the arts as innovative, if bleak, meditations on the human condition. The aim was to explain why Beckett’s work was important, compelling and puzzling, and then to show it without further comment.

Arena’s approach had antecedents, for in 1977 the producer of the BBC2 arts series The Lively Arts, Tristram Powell, had produced ‘Shades’, containing three Beckett dramas. Two were original commissions for television, Ghost Trio and … but the clouds …, and one was the version of Not I that Arena re-used in 1982. In a similar way to Esslin’s framing of Beckett, Radio Times (16–22 April 1977), advertised ‘Shades’ in a short accompanying feature article that described Beckett as ‘one of the most famous and secretive of playwrights’ and described ‘the bleak poetry of his vision’. The ‘Shades’ programme began with biographical and cultural commentary by Esslin, interviewed by arts presenter Melvyn Bragg. Beckett’s work, it seems, rarely gets to stand on its own and stimulates broadcasters’ mission to explain.

The problem for Arena and its predecessors was that Beckett never consented to interviews, and there was no film footage of him at work in the theatre, nor even any audio archive of his voice. Alongside explanation and comment from Esslin, photographs of Beckett played an essential role as visual supports for the Arena season. Iconic monochrome images (often by theatre photographer John Haynes) of Beckett’s craggy face and piercing eyes have been a persistent feature of television programmes about his work (as in Fig. 1 above), standing in for the more usual interview material in which writers are quizzed about their intentions and working practices.

As John Walker’s book Arts TV (1993) has noted, for many television viewers, television is their primary access to the arts. So, Arena and other arts strands carry a responsibility to offer coverage of the arts, while wrestling with the boundaries of what should be covered and the aesthetic choices of how to do so. The imagined audience is likely to comprise both informed and uniformed viewers, and so the presenter has a crucial role as the mediator of knowledge, taste and judgement. Because of Beckett’s refusal to talk about his own work, and because of the work’s perceived inaccessibility, television has acted as an exhibition medium, occasionally as a commissioner of original work by him and, crucially, as a medium for curation, framing, contextualising and interpreting the plays.

The format followed by Arena for presenting Beckett continued with, for example, the BBC’s Beckett at 80 in 1986 and the posthumous A Wake for Sam in 1990, each of which were compilations featuring recordings of plays and readings from Beckett’s published work, with introductory and interstitial voice-over commentary of the same kind as in Arena. Arena relayed pre-existing recordings of theatrical performances and provided aesthetic knowledge and authoritative explanations of them. At the same time, Arena sought to use television as an art medium, and the inclusion in the Beckett season of two pieces written specifically for television, Eh Joe and Quad, gestures towards Arena’s agenda of showing that television could be art itself, as well as a medium for relaying it.

The Beckett season showcased what would now be called Beckett’s work’s ‘intermediality’: it self-consciously borrowed and mixed together features from different art forms. The BBC had been presenting Beckett’s radio plays for many years (since All That Fall on The Third Programme in 1957), and his ‘radiogenic’ work used sound effects, speech and music in highly reflexive, experimental ways. Beckett’s work for television did something similar, and when the Radio Times (11–17 December 1982) billing described Quad, the text (probably written by Esslin) draws attention to its links with graphical pattern, music, poetry, drama and dance, and its ambivalent tone:

A play without words, Quad has a musical structure. It is a kind of canon or catch – a mysterious square-dance. Four hooded figures move along the sides of the square. Each has his own particular itinerary. A pattern emerges and collisions are just avoided. From these permutations, Beckett, as writer and director creates an image of life that is both highly charged and strangely funny.

The authority accorded to Beckett after the theatrical success of his play Waiting for Godot (staged by Peter Hall in London in 1955), and the numerous BBC radio productions of his work that Esslin oversaw as Head of Radio Drama from 1963 to 1977, meant that Beckett was perceived by television producers as part of a cultural elite. There was a close association between BBC radio and television drama producers and the London theatre, evidenced by the collaborations that brought the Royal Court Theatre productions of Happy Days and Krapp’s Last Tape to the BBC, making them available for the Arena season. The director Donald McWhinnie, actors Patrick Magee, Jack MacGowran, Siân Phillips and Billie Whitelaw, for example, who each worked on plays in the Arena season, had privileged relationships with Beckett and knowledge of his work in theatre, radio and television. Esslin himself was the author of several academic publications about Beckett’s work (in 1975, 1982, 1987 and 1991) placing it alongside mainly European avant-garde plays that he called the ‘Theatre of the Absurd’. Similarly, in his introductions to the Arena season he made the case for Beckett’s work’s aesthetic and cultural significance, as an expression of, and response to, the existential purposelessness of the post-Christian, Cold War world.

In 1982, Beckett represented a whole set of cultural values, at a time when those values were being questioned. In broadcasting, commerce, competition and populism gained ascendancy after Margaret Thatcher’s Conservative government took power in 1979. In drama, ideas of accessibility challenged the Modernist heritage of ‘difficult’, ‘elitist’ work for which Beckett’s name was a shorthand. Anxiety about this may explain the irregular scheduling of the Beckett season. While Happy Days was broadcast at 7.40 pm, both Eh Joe and Quad were shown after 10.00 pm, Krapp’s Last Tape was screened at 11.30 pm and Not I occupied the ten minutes either side of midnight. Moreover, in 1982 few households had video recorders so missing a programme often meant missing it forever. BBC2 had space for Arena’s Beckett season, but the space was becoming a more marginal one.

The principles of Public Service Broadcasting guarantee the presence on mainstream channels of programmes about the arts and programmes that present and adapt painting, music, theatre or dance for the screen. Arena made a crucial contribution to this realising this aim, and in its own right it expressed diversity in programme content that in different ways was designed to inform and educate the audience. Watching these programmes now, we can sense the real desire to enhance viewers’ aesthetic faculties and interests. Part of that was to show, present and make space for Beckett’s dramas, while at the same time pre-empting the audience’s expected puzzlement. Arena’s Beckett season is an instructive example that shows how the remit of arts television could be realised, and how its inherent tensions could be negotiated.

Jonathan Bignell is Professor of Television and Film at the University of Reading, where he specialises in the histories and audio-visual forms of British television drama. He has written extensively about Beckett’s work on TV and this article is based on research conducted for his book Beckett on Screen: The Television Plays, published by Manchester University Press.