First screened on British television in October 1973, the documentary series The World at War proved to be a milestone in the history of ITV. Professor James Chapman explores its roots and its critical standing.

About the author: James Chapman is Professor of Film Studies at the University of Leicester. He is the author of nine books including The British at War: Cinema, State and Propaganda, 1939-1945 (I.B. Tauris, 1998), Past and Present: National Identity and the British Historical Film (I. B. Tauris, 2005), War and Film (Reaktion, 2008) and Projecting the Future: Science Fiction and Popular Cinema, co-authored with Nicholas J. Cull (IB Tauris, 2012). He is a Council member of IAMHIST and editor of the Historical Journal of Film, Radio and Television.

The World at War is undoubtedly a landmark in the genre of historical documentary on television. Perhaps the most significant fact about the praise lavished upon the series - produced by Jeremy Isaacs for Thames Television and first broadcast on the ITV network in 1973-4 - is that the acclaim has come from both television critics and professional historians. A reviewer in the Daily Express, upon the occasion of its repeat on Channel 4 in the early 1980s, averred that ‘it will always rank as one of the finest achievements since the dawn of television’.(1) For the historian D. C. Watt it was ‘one of the great historical television series’. (2) Yet for all the plaudits and awards, the making of The World at War was not without its problems and the series attracted as much controversy as acclaim.

Production history The unknown history of The World at War is that it was was made when it was, and how it was, due to a very particular set of institutional circumstances within the television industry. The series was not, as sometimes assumed, a sequel or follow-up to The Great War, broadcast to great acclaim by BBC2 in 1964. The Great War had made extensive use of ‘eye-witness’ testimony from surviving participants alongside archival film from the vaults of the Imperial War Museum. However, it had also drawn criticism for doctoring the archive materials, for example in reversing footage so that British troops were always seen attacking in the same direction, and for using reconstructed sequences without recognition that they were not the ‘real’ thing. Noble Frankland, the Director of the Imperial War Museum, was so disappointed with The Great War that he disowned it and refused to work with its producer, Tony Essex, again. (3) 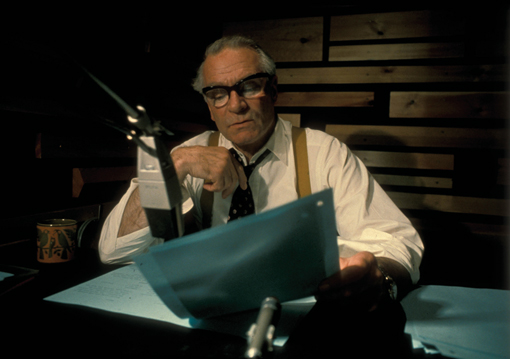 Frankland’s experience with The Great War to some extent explains why The World at War came to be made by Thames rather than the BBC. Another reason was that the Budget of 1971 had unexpectedly reduced the amount of their advertising revenue that the independent television franchise holders had to turn over to the Independent Television Authority. This left contractors such as Thames with more money in their coffers than expected and looking for something to spend it on. Jeremy Isaacs, then Controller of the Features Department at Thames, suggested making ‘the history of the Second World War’. (4) The idea appealed to Thames because the ITV network had been under criticism for not doing enough to fulfil its public service remit. This point was noted at the time by television critic Peter Fiddick, who remarked that ‘Thames has proved to its network colleagues that a serious programme can sustain the demands of peak time’. (5) 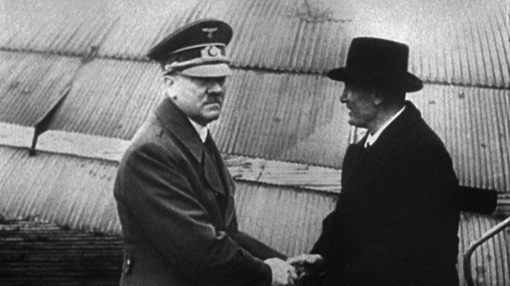 Isaacs and his production team - including associate producer Jerome Kuehl, film researcher Raye Farr and Susan McConachy who co-ordinated the many interviews with participants - worked for two years on The World at War. In total it comprised 26 episodes running to almost 21 hours of television. There were two guiding principles in making the series. The first was that the interviewees would be ‘ordinary’ people rather than generals or statesmen: Isaacs wanted The World at War to describe the experiences of participants from the bottom up rather than the top down. This differentiated it from previous television histories of the Second World War such as ABC’s Crusade in Europe (1949) and the BBC’s The Valiant Years (1961) which had been closely tied to the accounts of major figures (Eisenhower and Churchill respectively). The second principle was that the series would make use only of genuine actuality film and should avoid reconstructed footage. In an internal memo of October 1972, Isaacs impressed upon the production team that ‘it is important to remember that we are not making “poetic” films with licence to use footage where we please. We are making an historic series and should not knowingly use pictures purporting to be what they are not.’ (6) When using reconstructed material was unavoidable, it was identified as such either in the commentary or through an on-screen caption.

... it was estimated that some three and a half million feet of archive film were viewed

The publicity surrounding The World at War went to great lengths to emphasise the amount of research - it was estimated that some three and a half million feet of archive film were viewed in the preparation of the series. This included some material from the commercial newsreel libraries such as Movietone and Pathé, though the bulk came from the Imperial War Museum and other national archives. However, the researchers were denied access to Soviet and East German archives, which meant that the episodes dealing with the Eastern Front had to make do with captured Soviet film discovered in the Federal Bundersarchiv in Koblenz.

Reception The World at War was warmly received by television reviewers who particularly admired its use of previously ‘unseen’ footage and the eye-witness testimony of ordinary people: to this extent it very much became the model for future historical documentary series such as The People’s Century and The Nazis: A Warning from History. Most critics were impressed by the fair-mindedness of the series and by its uncompromising representation of the horror and brutality of war. The World at War had none of the triumphalism of Cold War-era series such as NBC’s Victory at Sea (1952) - both Carl Davis’ music and the commentary by Laurence Olivier (Isaacs’ one concession to ‘star’ names, chosen with a view to US sales) were suitably somber in tone. There were some criticisms, however. The Morning Star - official mouthpiece of the Communist Party of Great Britain - felt that early episodes neglected the role of the Soviet Union; it later conceded, following ‘Barbarossa’, ‘Stalingrad’ and ‘Red Star’, that this omission had been remedied. And several critics were uneasy about the episode ‘Genocide’ dealing with the death camps and the extermination of the Jews, feeling that some of the footage shown was too horrific for primetime viewing.

The World at War also prompted a vocal response from members of the viewing public. Thames received hundreds of letters about the series: these are now deposited with the Imperial War Museum and they are valuable as evidence of actual viewers’ opinions. They reveal a surprisingly wide range of responses. Many are highly laudatory and heap praise upon the producers. Others are extremely nit-picking and point out myriad ‘errors’. (7) There were accusations of national bias - several British veterans, for example, felt that Britain’s contribution to the defeat of the Axis powers was under-valued - while some correspondents took exception to the representation of events such as the Battle of Stalingrad (‘I feel compelled to protest at the grudging - even derogatory - tone taken by the writer of last night’s episode towards the heroic battle put up the Russians at Stalingrad’) and the Warsaw Uprising (‘Shame on you for perpetuating the myths that bedevil the Warsaw Uprising of 1944’). The most controversial episode was ‘Occupation’, dealing with the German occupation of the Netherlands, which several correspondents felt gave more attention to the activities of collaborators than the resistance. In fact this was not the case: but for obvious reasons there was no archive film of resistance activities. As Isaacs replied to one viewer: ‘You bring home to me once again the very strong impression that pictures always leave of a film, as opposed to words. That, I think, must explain the impression you and others have received of our film.’

Contexts For all the controversy in some quarters, The World at War was an important landmark in the use of archive film for the presentation of history. It was made at a time when professional historians were starting to take seriously the value of film as a historical source. The landmark conference ‘Film and the Historian’ at University College London in April 1968 had resulted in the setting up of the University Historians’ Film Committee. The use of archive film in the teaching of modern history was being actively promoted in the production of teaching programmes by the Inter-University History Film Consortium and by The Open University. The producers of The World at War took a keen interest in this field and kept abreast of developments by sending delegates to a conference on ‘Archive Film in the Study and Teaching of Twentieth Century History’ at the Imperial War Museum in 1972. The ‘film and history’ movement gathered momentum with the publication of Paul Smith’s edited collection The Historian and Film in 1976 - a book in which The World at War was held up as a model of how to navigate the competing demands of academic history and narrative television - and by the formation in 1977 of the International Association for Media and History (IAMHIST) with the purpose of bringing together historians, archivists and practitioners. It is no exaggeration to say that The World at War probably did more than any other single programme (or book for that matter) to legitimate the use of film in the study of twentieth-century history.

The World at War reflected the state of historical knowledge in the early 1970s: a significant omission from the series, for example, is the role of ‘Ultra’ in decoding German wireless traffic as this was still classified. More generally its representation of the Second World War was influenced to a large degree by the intellectual climate of the time. In particular it was made at a time when events such as the Vietnam War and the Troubles in Northern Ireland had tarnished the image of the military. It is significant in this context that The World at War begins (and ends) with an incident chosen to symbolise the brutality of war - the massacre of French civilians by the SS at Oradour-sur-Glaze in 1944 - which seems also to bear uncanny parallels with the My Lai massacre in Vietnam (March 1968) and ‘Bloody Sunday’ in Londonderry (January 1972). The World at War may fairly be described as an anti-war narrative: its prevailing themes are the tragedy and horror of war and that all participants are victims. This has been acknowledged by members of the production team, including Jeremy Isaacs and Jerome Kuehl. It is evident from one letter from Mrs Chambers of Newcastle that this message was also understood by viewers: ‘My husband and I have not missed viewing any of the series. It has been extremely harrowing but the programme is so intensely informative that we consider it is the most vivid propaganda for future peace that has ever been portrayed.’ Ultimately, The World at War, like all television programmes, was very much history for and of its time.

James Chapman is Professor of Film Studies at the University of Leicester. E-mail: jrc28@le.ac.uk

*A shorter version of this article first appeared in Viewfinder 80.