Home Viewfinder MagazineVisions of Other Cinemas: International Film and the Early Days of Channel 4

Visions of Other Cinemas: International Film and the Early Days of Channel 4by Dr Jean-Baptiste de Vaulx, Royal Holloway, University of London

Imagine turning on your television set (or whichever platform you happen to watch on) and coming across a season of films from Vietnam with expert introductions, a documentary about the history of Hong Kong cinema featuring clips from rare films and interviews with local filmmakers, or a report from a film festival in Burkina Faso airing the voices of emerging African filmmakers. Compared to the paucity of coverage given to non-English language films these days, it sounds hard to believe. If similar materials are made in our present digital era, they would be dispersed across YouTube and the internet, which only makes them harder to find. And yet, all of these examples and many more were broadcast, in the 1980s and early ‘90s, by Channel 4 which then still represented one quarter of British terrestrial television. The fact that you could easily and randomly chance upon such cinematic encounters, curated and contextualised, was personally for me as a young boy at the time foundational, both in making sense of British culture and for my burgeoning curiosity for international film. More broadly, it attests to a certain mode of framing film, as an encounter worth having, worth contextualising and engaging with, and as a springboard to discuss and think about so many other things, which for better or worse (worse in my view) has never since recovered quite the same space within the mainstream cultural arena.

Flying under the banner of pluralism, Channel 4 was inaugurated in November 1982 with a public broadcasting remit to be different, innovative, and in opposition to what the other three existing channels were doing. Under its first Chief Executive, Jeremy Isaacs, C4 was committed to showcasing an eclectic spectrum of film culture, a project which fitted perfectly into its remit. At the time, acquiring the rights to screen international cinema was economically favourable for television buyers, and from its very start C4 had its regular ‘World Cinema’ strand, organising international films into seasons around themes, or around a specific national or regional cinema. This speaks to the wider zeitgeist of cinematic discovery at that time, a moment when British and other European film cultures were expanding their cinematic horizons to include national cinemas previously under-represented. Cinemas like The Other Cinema offered a platform for radical and experimental international films to be shown, while the National Film Theatre offered a similar model of curated seasons in their programming (which C4 sometimes attempted to broadcast films in conjunction with). In France, the Nantes Festival of Three Continents did much to broaden perspectives of international cinema (and inspired the title of one of C4’s early regular programmes, ‘Cinema from Three Continents’). All this was indicative of a wider desire to revise the Euro-American bias of cinematic canons, a desire resonant within many facets of film culture at that time, including C4. 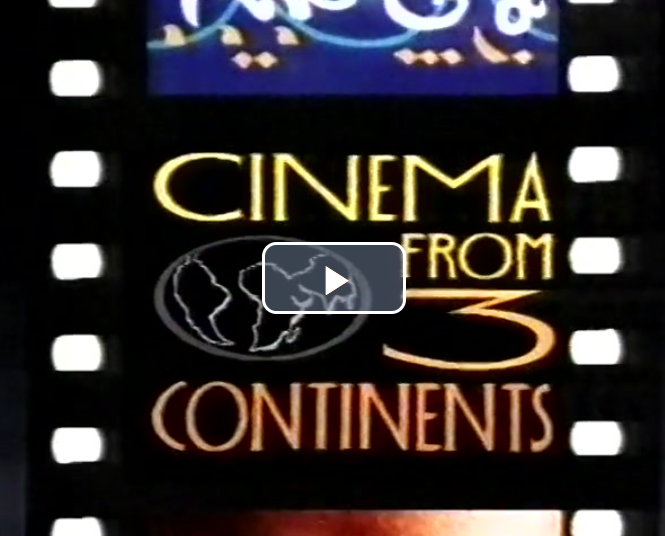 The innovative nature of C4’s coverage of international cinema at this time came not only through its acquisition of films to screen, but also the contextualising programmes and film magazine shows broadcast around the films. The novelty factor can largely be attributed to C4’s commitment to commissioning independent content and hiring individuals not previously involved in television, who were eager to do things differently and had themselves been formed by this growing revisionist attitude to international cinema. One prominent example was Rod Stoneman, who worked at C4 between 1983 and 1993 and was responsible for programming international cinema strands. Stoneman has cited as a formative personal experience the politically heady moment of 1968, and the subsequent realisation that “there was a rather large part of the world which was not properly mapped onto or connected with the northern part, the West, where we were”(1). This shaped his own outlook on film, inspiring his efforts to screen films from Asia, Africa and Latin America on C4.

Another significant example was the team behind the magazine programme Visions, initially produced by John Ellis, Simon Hartog and Keith Griffiths out of an independent production company, Large Door Ltd, although Griffiths left his role as producer after the first series. Again, the project was founded by individuals who had been connected to the diverse and pluralistic strands of an oppositional and revisionist film culture: Griffiths had produced the experimental film Riddles of the Sphinx (1977, Laura Mulvey and Peter Wollen), Ellis had previously written for the academic journal Screen, and Hartog had developed “an informed and passionate commitment to non-British cinemas, especially those of Africa, the Middle East and South America.”(2) Seizing the opportunity represented by C4 as an independent platform seeking new kinds of programming, they proposed a reviewing program aiming to be eclectic in covering many different types of film, analytical in its assessment of commercial and contemporary cinema, and innovative in introducing new ways of discussing film on television. 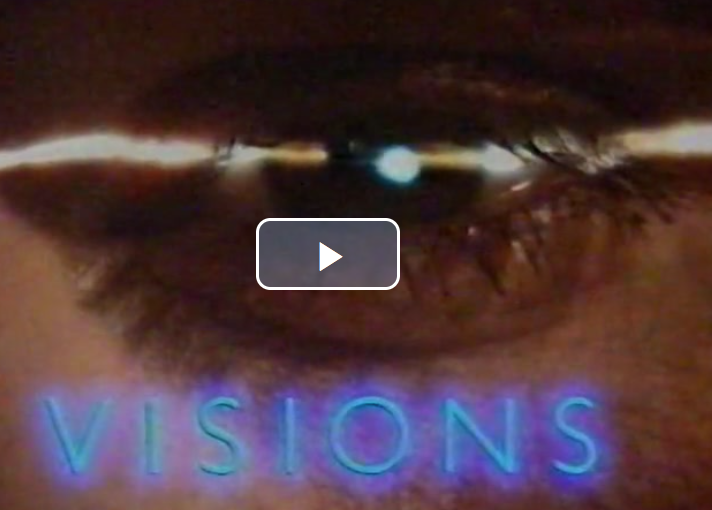 Coupled with this new approach was C4’s desire to be pedagogical in its coverage. Both seasons and regular programmes were supported by various forms of contextualising materials: short intros by an expert before a film, documentaries and reports commissioned by filmmakers, reviews analysing a certain film or topic in depth, and even occasionally an accompanying booklet which could be purchased for a small sum. According to programme notes printed in C4’s own press packs, its international cinema coverage was offering viewers the chance “to discover the richness and diversity of other cultures.” (3) The window on another culture here is not just posited as entertainment or as an aesthetic experience, but as potentially establishing cultural exchange. This was demonstrated by the approach taken on one of the slots Stoneman worked on, a weekly magazine programme entitled South, with the remit of contextualising the world cinema being screened for that week’s programming. Films did not only stop after a screening; instead they were a stepping stone towards greater understanding, a radically new context of film exhibition on television. South also commissioned segments and documentaries made by filmmakers from the Global South itself, such as Férid Boughedir’s overview of Arab film history Caméra Arabe (1987), reflecting the show’s onus on the direct mediation of the filmmakers themselves.

As for Visions, across its three series between 1982 and 1985, it demonstrated a wide-ranging interest in founding an alternative culture of film reception, one completely eclectic and pluralistic in treating all forms of cinema as worthy of intellectual consideration and analysis. The format of the show varied week by week. At times it consisted of reports from festivals, such as a half-hour segment from the FESPACO Pan-African Film Festival in Ouagadougou, Burkina Faso. It also aired short film-essays commissioned from filmmakers, and invited Asian cinema expert Tony Rayns to make longer standalone documentaries, resulting in episodes on the history of cinema in China, in Hong Kong, and in the Philippines. In other episodes, more recent releases were discussed and analysed, complete with clips, making the show at times like a more academic version of the BBC’s Film with Barry Norman show. The show also acted as a forum for varied voices to air their views, be it the testimony of local filmmakers and industry figures in the despatches from other parts of the world, or the specially made presentation-like reviews by renowned names from the sphere of arts and culture. For instance, one week you might watch Angela Carter reviewing Peter Greenaway’s The Draughtman’s Contract (1982), and the next Farrukh Dondy giving his rundown of Gandhi (Richard Attenborough, 1982).

Although the show was consistently unpredictable in its content (and its programming time which C4 continually shuffled), it represented an invitation for those with an eclectic appetite for all things film-related and a desire to learn, to expand their horizons. Moreover, thanks to its analytical and never condescending tone, it was also a welcome arena for those who wanted film studies to be a more accessible project, quite literally open for all on public broadcast television. The producers of Visions saw their airtime as a potential resource to open up audiences to different cultures “without reducing them to what is immediately recognisable,” (4) paying careful consideration to the transmitting culture’s own specificities, in the hope of forming new contexts of cinematic reception. In their own way, these shows were also changing the norms of television from the ground-level up, making the esoteric and the uncommon into something that could be encountered, engaged with intellectually, eventually becoming more familiar. When Visions was eventually taken off air after its third series in 1985, and replaced by a more conventional film magazine programme on C4, the hole it left was felt: for instance, the magazine Framework dedicated a lengthy article examining the show’s legacy.

As C4 is perennially threatened with privatisation, and as it has transitioned so much since those early days – beginning with the departure of Isaacs to be replaced by Michael Grade who was far more reluctant to screen subtitled films – it is hard to see much of that legacy today. Those new contexts of cinematic reception, and those hoped-for platforms for cultural encounters, have all migrated elsewhere, into new niches within a much more saturated and fragmented media landscape. Yet, within that, that early C4 ethos has still found some room for itself. Visions and other early C4 content can of course be viewed on BoB now, while some episodes have made their way to YouTube and gather thousands of views. Some of the content created has also found a new lease of life as supplementary extras on Blu-Ray and DVD releases, such as Angela Carter’s review of The Draughtman’s Contract appearing on the BFI’s recent release of that film, while Tony Rayns’ documentary on Philippines cinema (commissioned for Visions) features on the BFI’s Lino Brocka boxset. This attests to the quality and continued relevance of the material itself, and hints that perhaps such curated home video releases are one equivalent platform for curated, pedagogically-minded cinematic reception in today’s era. Certainly, it is not as central a place as airtime on one of four terrestrial channels, nor is it quite as fun as chancing upon them when turning on the TV set anymore. But these shows retain appeal as a fascinating reminder of a path almost but not quite taken by British film culture.

Jean-Baptiste de Vaulx has recently completed a PhD on the circulation and reception of world cinema at Royal Holloway, University of London. He now teaches film and sociology at the Royal Holloway International Study Centre and blogs about cinema at https://cine-scope.com/