About the author: Dr Sian Barber is a Postdoctoral Researcher in the Department of Media Arts at Royal Holloway, University of London. She completed her PhD at the University of Portsmouth as part of the AHRC-funded 1970s project and has published on British cinema and cinema going. Her latest work is Censoring the 1970s: the BBFC and the Decade that Taste Forgot and will be published by Cambridge Scholars Press in January 2012.  She is currently working on the EUscreen project which aims to provide online access to Europe’s television heritage.

Krämer’s detailed textual analysis of key themes within the film is bookended by a careful review of the film’s production history, funding, adaptation from the source novel and its reception.

Does the world really need another book on Stanley Kubrick’s A Clockwork Orange (1971)? Perhaps not, but the world of film and media definitely needs Peter Krämer’s new book on it. Published as part of the Controversies series edited by Julian Petley and Stevie Simkin, this book is a detailed case study of Kubrick’s stylish and endlessly-discussed 1971 offering. What sets the book apart from the many others on the subject is the way in which the text is structured. Krämer’s detailed textual analysis of key themes within the film is bookended by a careful review of the film’s production history, funding, adaptation from the source novel and its reception. The work is broken up into sections which cover key themes and ideas, key scene analysis, production history, marketing and reception, and legacy.

In structuring the work in this way, Krämer appeals not only to a scholarly audience but to a student one who could perhaps use this work to see how effectively detailed textual analysis can be combined with a study of the film’s production contexts and its broader social impact. Using a range of sources including newspaper reviews and reports, Krämer also traces the release pattern of the film, the responses to the marketing and the way in which the film continued to be used by the press, for a variety of purposes, long after it had ceased to play in cinemas. 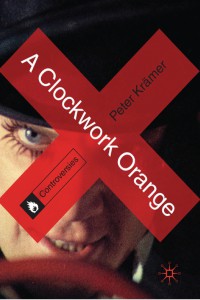 By effectively demonstrating the many different strands of film and media studies analysis which can be utilised when studying a particular text, Krämer offers a great blueprint which students could use to structure their own work. The final section which traces the legacy of A Clockwork Orange should be at the top of every student’s reading list when they come to planning their dissertation work. This section effectively traces and explores the mass of material written about the film and the development of arguments both against and in favour of the film across different time periods and in both the USA and the UK. Such an effective literature review would be of tremendous benefit to students in illustrating how a survey of material can be undertaken and how such work needs to be historicised, evaluated and contextualised.

The work draws effectively on material from the Kubrick archive at the University of the Arts, London including Kubrick’s own letters, memos and treatments. This material is particularly well-used when Krämer explores Kubrick’s motivations and later justifications for his production of Anthony Burgess’ 1962 novel. Krämer’s thoughtful consideration of A Clockwork Orange as a production which must be viewed in the context of Kubrick’s broader career is a valid one and one which is in danger of being forgotten in the elevation of the film to the status of seminal and standalone text. Within the film, Kubrick had the opportunity to explore issues which he felt he had failed to fully explore in previous films such as Lolita (1962) and Krämer argues that it is in this context that the critical and thematic preoccupations of A Clockwork Orange must be understood.

As Krämer points out, in the late 1960s Kubrick was one of the most successful and celebrated directors of the period and so had no difficulty in attracting funding and production support for his film. The levels of support given to Kubrick in the late 1960s and early 1970s to make A Clockwork Orange is at odds with the financial construction of both the American and British film industries in this period.

In dealing with the film’s controversial and extreme thematic preoccupations, Krämer situates A Clockwork Orange within the broader context of increased permission and changing standards of acceptability at the end of the 1960s and start of the 1970s. He alludes briefly to changes in censorship and to the desire of young audiences to see youth-focused films and films whose content would have been unthinkable years before including Bonnie and Clyde (1967) and The Graduate (1967). Situating the production of the film as part of the New Hollywood of the 1970s is a helpful teaching tool for exploring the changing landscape of production as well as indicating the proactive role played by the British Board of Film Censors in signalling approval or otherwise of a proposed project.

Krämer carefully explores the provenance of the novel and makes the point that it was written about 1960s, not 1970s society, a key point which many critics of the film were happy to overlook.

Perhaps one of the areas which would have benefited from a little more detail was the making of the film. The only people mentioned who are associated with the production apart from Kubrick are executive producer Si Litvinoff and the main cast members. The appendix usefully contains key details about the film including the names of all the important production personnel, but it would have useful to explore the input of some of these individuals – notably production designer John Barry and lighting cameraman John Alcott – particularly when considering the film’s distinctive visual style in section two. This would also have allowed for a brief engagement with the problematic notions of A Clockwork Orange as Kubrick’s solely-produced text and the issues of auteurism, particularly when applied to such a famous work by such a celebrated director. The same observation cannot be applied to the issue of the film as an adaptation. Krämer carefully explores the provenance of the novel and makes the point that it was written about 1960s, not 1970s society, a key point which many critics of the film were happy to overlook.

The best thing about this book is that it moves beyond the typical debates about the controversy created by the film and presents it as a fascinating text worthy of study in its own right, not simply for its controversy. All the usual A Clockwork Orange lore is here – the withdrawal of the film at Kubrick’s own request, the ‘Clockwork crimes’ cited in the press – but Krämer explores the film in a way which feels fresh and draws attention to its less controversial features, such as its funding and production history, as well as its controversial qualities.

Dr Sian Barber works in the Department of Media Arts at Royal Holloway, University of London.