About the reviewer: Professor Paul Wells works in the Animation Academy in the School of Arts, English and Drama at Loughborough University. The Animation Academy is a research group dedicated to innovative engagement with animation and related moving image practices. His publications include Understanding Animation (London: Routledge), Animation and America (Rutgers University Press), The Fundamentals of Animation (Lausanne: AVA), and The Animated Bestiary: Animals, Cartoons and Culture (Rutgers University Press). Paul is also Chair of the Association of British Animation Collections (ABAC), a collaborative initiative with the BFI, BAFTA and the National Media Museum.

'Writing about British TV animation with a comic inflection since the 1950s, yeah, well, it looks like it 'n' all!'. Avid Modern Toss viewers will recognize the dulcet tones of the Drive-by Abuser in that opening sentence, one of the considerations in Van Norris' welcome and insightful study of British animated comedy on television over the last sixty years or so. Of Modern Toss he notes ‘its comic modes appeared as an expression of the uncensored, abusive modes of humour that emerged through the rapidly expanding communication culture of internet blogs, message boards and e-mails’. This contemporary model of confrontational, uninhibited, largely masculine, and often offensive comedy, so common in social media and web criticism, has found purchase precisely because of the perverse irony in the ‘democracy’ permitted by cross-platform personal and social technologies. It was not always so.

Norris identifies 'three waves' of TV animation - the first wave, essentially, the post war advances of the Halas & Batchelor Studio, and the emergence of the commercial sector, with key immigrant figures like Bob Godfrey, Terry Gilliam and Richard Williams; the second wave, the advance of Aardman, and the rise of the Channel Four auteurs, so successful, both on television and the international festival stage; and finally, the third wave, and main preoccupation of the book, the piecemeal consolidation of animation in sit-coms and series as part of broader cultural phenomena and post-modern trends. It is in this that Norris’ work is at its most impressive, seamlessly integrating animation and cultural theory in an accessible but socially and politically grounded analysis that reveals much about the significance of animated comedy in Britain, and more, its concurrent relationship to other forms of humour on television and elsewhere. 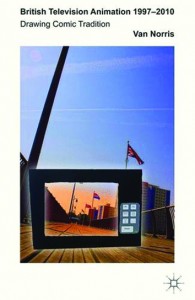 A far cry from the often innocuous comic invention of the classic Hollywood cartoon, even in the conscious guise of work by Chuck Jones, Tex Avery, and Frank Tashlin, British animation has always grounded itself in comic idioms that betray their cultural and ideological charge. Norris properly identifies the ways in which the pre-multi-cultural, mono-culture of the ‘first wave’ essentially spoke to new white middle-class consumerist norms, a trend that was to continue as late as Alison Snowden and David Fine’s Bob and Margaret, even while other more ground-breaking works like Sarah Ann Kennedy’s Crapston Villas was beginning to reflect alternative models of community and representation. Indeed, at the time, I myself was caught antler-locking with the arts culture crowd, noting first, that while Julian Stallabrass had acknowledged the progressive nature of animation (good), he missed a trick in claiming that only The Simpsons was more valid than Brit-Art (not so good). (The success of The Simpsons, and later South Park and Family Guy, as well as the Adult Swim strand in the US remains the touchstone for comparisons to British animated comedy). High-horsed, I asserted that much closer to home, Kennedy, Candy Guard (Pond Life) and their ilk, were creating more engaging riffs on British culture and aesthetics in animation than Hirst, Emin, and the others were doing with beds, sharks, and light-switches in the gallery. These claims largely fell on deaf ears, so Norris’ discussion is especially valuable in insisting upon the importance of this period.

These late ‘second wave’ works begin to anticipate the new ‘families’ of the ‘third wave’, for example, the troubled single-parentage of Eric Feeble in Carl Gorham’s Stressed Eric and ‘Batch 4’, the animal-experiment escapees, in Baby Cow’s I Am Not an Animal. Eric, though, far better reflected the real world traumas of the economy and single-dom, than the animals, who are defined only by their intake of the rhetoric of media myths, celebrity gossip and ‘talking head’ social pretention. Norris is at his most astute though, in a nuanced assessment of Harry Thompson’s Monkey Dust, which remains an undervalued contribution to the British animation canon. Here, Norris plays the series out as a response to the limits of ‘political correctness’; part reactionary, part radical; a dark, ambivalent sometimes astute, sometimes misguided attempt to understand an increasingly complex world, lacking purpose and vision.

By the time Modern Toss’ Drive-by-Abuser, Martin, Barney and Mr Tourettes were railing at the world, ‘third wave animation’ had consolidated its impact but hinted at a last hurrah for satire, and its eventual decline. Like much would-be radicalism, such animation, became re-absorbed into the cultural amoeba, a mainstream model of work, rendered conservative by its context, and in the case of the BBC’s Popetown, its simple failings of quality instead of an anticipated coruscating critique of organized religion. Norris writes clearly and perceptively about this era – largely taking place between 1997 and 2005 – and prompts a certain nostalgia for when British animation very nearly made its mark. But hark, what’s this? I once again hear the rasp of a scooter, and the bellow of the Drive-by-Abuser with his megaphone: ‘Writing a little review of a valuable text dealing with the significance of ‘third wave animation, are ya ? Better get home and read it then, hadn’t I. See you around, yeah….’.