The Devil's Advocates series is an imprint of Auteur Publishing – a UK-based press dedicated to championing research in film and television studies – and provides a space for genre scholars to engage with a single horror film in roughly a hundred pages, give or take. Since the publication of Anne Billson's monograph on Let the Right One In (2008) and Ian Cooper's study of Witchfinder General (1968) in 2011, Devil's Advocates has gained a reputation as a venue for excellent scholarship on the horror genre and has only become more popular and prolific by the year, recently producing particularly indispensable volumes on The Shining (1980) by Laura Mee, In the Mouth of Madness (1994) by Michael Blyth and Twin Peaks: Fire Walk With Me (1992) by Lindsay Hallam.

One of the most impressive books the series has produced in its nine years is Jon Towlson's 2018 monograph on Candyman (1992). Towlson has worked with Auteur before, penning a fantastic volume on Close Encounters of the Third Kind (1977) for Constellations, its series of volumes on science fiction cinema. But it is Towlson's background as an accomplished horror scholar that makes him perfect for Devil's Advocates. He is the author of Subversive Horror Cinema: Countercultural Messages in Films from Frankenstein to the Present (2014) and The Turn to Gruesomeness in American Horror Films, 1931–1936 (2016), two of the best books in McFarland's not inconsiderable catalogue of horror-focused titles. 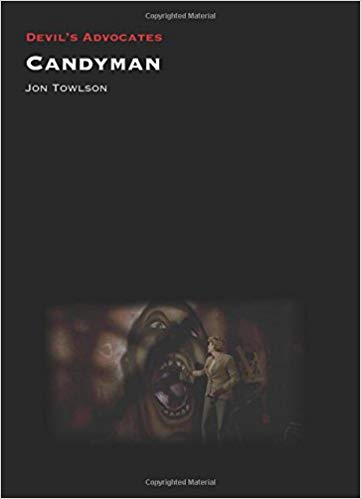 Given Towlson's long-standing interest in horror's potential to communicate radical ideas – this is, after all, the central concern of Subversive Horror Cinema – there is perhaps no better writer to tackle Bernard Rose's Candyman for Devil's Advocates. Based on 'The Forbidden', originally published in volume 5 of Clive Barker's Books of Blood (1985), Candyman has long been at the centre of debates regarding its treatment of race and gender. It focuses on a white graduate student, Helen Lyle (Virginia Madsen), who encounters the supernatural being known as the Candyman (Tony Todd) – the son of a black slave who was murdered by a lynch mob in the nineteenth century – while investigating urban legends in Cabrini-Green, a Chicago housing project.

In his introduction, Towlson lays out an intention to ultimately discuss the film in relation to Robin Wood's concept of the 'return of the repressed,' or the idea that America's horror cinema makes monsters of that which the nation can't bear to confront. This becomes the subject of the book's fourth and longest chapter, an extremely detailed and effective scene-by-scene analysis that not only communicates the author's own interpretation of Candyman, but engages with previous scholarship on the film by the likes of Stacey Abbott, Lucy Donaldson, Annette Kuhn and Isabel Cristina Pinedo. Towlson makes a compelling case for Candyman as a film that explores the oppression of both black men and white women in American society and offers a progressive reading of the film's ending. Importantly, though, he also recognises that myriad ways in which the film is troubling, and doesn't shy away from discussing the problematic nature of equating the black male experience with that of the white female.

While this analysis is the volume's centrepiece, there is a great deal more to be taken away from this monograph, which is not just an analytical piece but a production history and adaptation study. The book's first chapter provides a fascinating overview of 'The Forbidden' and discusses the tale's origins in Barker's childhood: a tale heavily inspired by the urban blight of 1960s Liverpool. Its second then investigates the importance of urban legends to both Barker's original story and Rose's adaptation. These initial chapters make for fascinating reading as the author outlines the film's various influences, from 'The Forbidden' to Blacula (1972) via the 'Bloody Mary' myth, which provided the basis for the idea that the Candyman can be summoned by saying his name five times into a mirror. Towlson also explores the history of the real Cabrini-Green, discussing both the extraordinary decision to set the film in such a notorious housing project and how this touch of realism adds some additional gravitas to the film's themes.

The film's production and reception is the subject of the volume's third chapter. This is familiar ground for Towlson; as the author of a number of production histories published in popular genre publications such as Diabolique, The Dark Side and Scream, the writer is well-versed in spinning entertaining yarns from the making of movies. His history of Candyman's production is no different, and is filled with insights on its casting, filming and even its soundtrack. The only thing missing at the end of this chapter is a more nuanced investigation of the film's reception by critics and audiences; in chapter two, the author discusses some of the controversies that surrounded the film's production (and specifically accusations of racism by the Chicago Tribune), and at the end of chapter three he briefly suggests that the proximity of its release to the Rodney King riots may have damaged its critical fortunes (though certainly not its box-office potential). This is a fascinating facet of the film's history and one that might have benefitted from a lengthier discussion.

The book's final chapter discusses Candyman's direct and indirect progeny, including its own sequels Candyman: Farewell to the Flesh (1995) and Candyman: Day of the Dead (1999) and the many films that have been influenced by Candyman through its connection with urban legends in general and the 'Bloody Mary' myth specifically. Towlson is openly critical of the film's admittedly flawed sequels and clearly hopes for a worthier continuation of the Candyman series in future. Clearly, Towlson finished his final draft of this volume before it was announced that Get Out (2017) and Us (2019) director Jordan Peele will be remaking the original film for a purported 2020 release – it's a shame that the author was not able to incorporate this development in his book, as much of his criticism of the existing sequels revolves around their failure to meaningfully engage with the black experience.

This excellent contribution to Auteur's accomplished horror imprint is rounded out by a brand new interview with Bernard Rose. In it, the London-born director reveals his early influences, ruminates on the nature of artistic freedom, discusses the power of suspense in the horror genre and, finally, provides some critical reflections on Candyman itself. Overall, then, this is an entertaining, engaging and rigorous account of a fascinating and multifaceted film. Just as his Close Encounters of the Third Kind is at the apex of the Constellations series, Towlson has produced one of the finest volumes that Devil's Advocates has to offer.

Craig Ian Mann is a film scholar with a particular interest in the cultural significance of popular genres, including horror, science fiction, action and the Western; his work on this subject has been published in a number of journals and edited collections. His first monograph, titled Phases of the Moon: A Cultural History of the Horror Film, is forthcoming from Edinburgh University Press. He lectures on film and television studies at Sheffield Hallam University, edits programme notes for London's Science Fiction Theatre and co-organises Fear 2000, a conference series dedicated to contemporary horror media.