How Films Were Made & Shown

About the Reviewer: Dr Luke McKernan is Lead Curator, News and Moving Image at the British Library. He is the author of: Charles Urban: Pioneering the Non-Fiction Film in Britain and America, 1897-1925 (University of Exeter Press, 2013); Shakespeare on Film, Television and Radio: The Researcher’s Guide (BUFVC, 2009), co-editor with Eve-Marie Oesterlen and Olwen Terris; Moving Image Knowledge and Access: The BUFVC Handbook(BUFVC, 2007), co-editor with Cathy Grant; Yesterday’s News: The British Cinema Newsreel Reader (BUFVC, 2002), editor; A Yank in Britain: The Lost Memoirs of Charles Urban, Film Pioneer (The Projection Box, 1999), editor; Who’s Who of Victorian Cinema: A Worldwide Survey (BFI, 1996), co-editor with Stephen Herbert; Walking Shadows: Shakespeare in the National Film and Television Archive (BFI, 1994), co-editor with Olwen Terris.

There have been many books that have instructed us on how films are made. This perhaps the first that informs us how they were made. For around 120 years films were made and shown on film; that is, on a clear plastic strip bearing photographic images through which light needed to be shone, with the successive images being projected intermittently by mechanical means, to fool the brain into perceiving motion.

Those days are gone. Motion pictures are now made and shown digitally, and increasingly those that once existed as film have been digitised and can only be experienced in that form. However those films which survive as film need caring for and need understanding, not only to ensure that they are properly preserved but to ensure that their digital manifestations represent as accurately as possible how they were originally experienced. The past commands our respect, and that requires expertise.

The aim of How Films Were Made & Shown is to pass on that expertise. Its authors are widely recognised experts in their field. David Cleveland was for many years Curator of the East Anglian Film Archive, overseeing its world-renowned MA in Film and Television Archiving, which produced a generation or more of skilled film archivists. Brian Pritchard is a film technician and archiving consultant with decades of experience and an encyclopaedic knowledge of the medium. 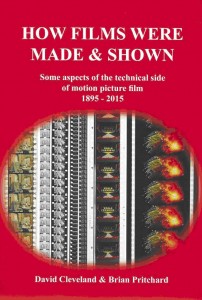 Their book pours out all that they can supply on the history and mechanics of film. Arranged chronologically, it covers the basics of production and exhibition, the historical developments from the 1890s through to recent times, and chapters on colour and the operations of a film laboratory. However, it is not an instructional manual in the usual sense. It is a very personal kind of history, with the points made frequently coming the authors' own experience, so there is a heavy bias towards British film history, and numerous illustrations that relate to East Anglia. This is not parochialism as such; it simply demonstrates that there are many different kinds of film history, and a myriad ways in which film travelled from 1895 to 2015.

The book is not meant to be an exercise in nostalgia, however. The authors want to us know these things, and through them to appreciate how films worked. It is rich in example, anecdote, images (over 900 of them), facts and figures. Given its status as a work of instruction and reference, it is a little frustrating that there are no notes, which will have saved on the pagination but means that we have to take the numerous quotations and statements of fact on trust. Few of the illustrations are given a source, and though many will have come from the authors' personal collections, it would have better to have known when this was the case and when not. The select bibliography is perfunctory, given the scale of the subject. The index is impressive, however: I do not recall having seen previously one quite so thorough in noting all the references to different rates of frames per second.

Another thing notable about the index is the virtual absence of the word 'digital'. Although it pops up a few times in the text, it turns up just once in the index (under 'Digital sound tracks'). There is no denial of digital as such; it is simply not part of the book's purpose. The longing some continue to hold for celluloid does not bear much scrutiny. How films are made and shown will always be changing, and we change with it. But if we know only digital we will fail to understand film history and we will certainly fail to care properly for that history. How Films Were Made & Shown is there to tweak the consciences of all those with a responsibility for the medium's past, and to excite interest in understanding and acting upon that history.