About the reviewer: Tim Wall is Professor of Radio and Popular Music Studies at Birmingham City University. He is Editor of The Radio Journal: International Studies in Broadcast & Audio Media and has lead five major collaborative research projects, as well as being a former AHRC Knowledge Transfer Fellow. He has contributed to publications such as Sage Handbook of Popular Music (2014), Jazz Research Journal (2014), Music Broadcasting and the BBC (2013) and New Broadcast Technologies (2006). He is currently leading a research project on social media citizen journalism in Egypt, Tunisia, Jordan and with Syrian activists, whilst also initiating knowledge exchange projects with arts and creative industry companies.

There are far fewer courses in radio studies than say television or film; and fewer academics studying sound broadcasting than study visual media. In histories of the media, radio is a prominent object of study up until the point that television becomes the dominant domestic medium of entertainment and then the focus shifts profoundly to the visual. However, radio remains an important medium, and until recently had a greater reach than television broadcasting in the developed world, and remained the dominant channel of mass communication in the developing world. As online media mature, radio has been a significant model for the new forms. Podcasting, music streaming services, and other audio forms are noteworthy parts of the online experience.

Given all this, there is a need for a straightforward, wide-ranging, and up-to-date introduction to ways to study radio and other new audio-based media. Hugh Chignell’s new book certainly fits the bill, and admirably takes the reader from initial ideas through to additional readings which explore the core issues in greater depth. It is crisply and engagingly written, draws upon a very good range of scholarship, and provides many useful contemporary examples. Although written by a British academic, with primary reference to British radio, there are consistent examples from other parts of the world. The book will be particularly useful to undergraduates starting radio studies courses, or who need to have a clear grasp of radio for their wider media or cultural studies. 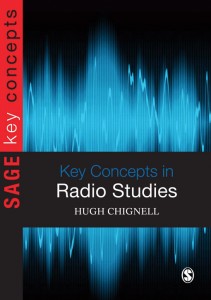 In many ways the book conforms to the usual structure of the key concept book. It is built around fifty ideas that are prominent in radio studies, and each is given an exposition which attempts to both define and develop the core concept. Here, each idea gets a short essay, and Chignell never attempts to produce a reductive definition of an idea, so the concept is placed in its proper context in radio as a communication medium, and in the field of academic radio studies. Although I consider this a virtue, I should note that this means there are no simple defining sentences. This book therefore makes the reader work a little harder, challenging them to grapple with the notion as a real thing in real radio, rather than something simply to be determined in abstract writing.

In addition the concepts are not in a simple alphabetical order, but organised within four parts relating to production genres, audience, industry and politics. This sets the book somewhere between a holistic outline of radio studies as an analytical discipline, and a part work of small points. It can therefore be read from start to finish as a rounded introduction, or an entry at a time as a ‘first-stop’ reference book. The collection of the key concepts into cognate parts tends to strengthen the first form of reading over the second. One has to use contents pages to find the concept. There is strangely no index, which means finding concepts that are in the book, but not awarded the status of being one of the fifty, requires some detective work. Further, while the book is designed so that the right hand page features the name of each concept, the left hand page carries a running book title, where the names of the parts would have been more helpful.

There will always be some degree of disagreement about the coverage and relative importance given to concepts in a book like this, but Chignell’s fifty concepts are well-chosen, and none is obscure enough to be considered anything but key. Like most books within radio studies, the concepts engage with the breadth of radio activity (an obvious virtue) but often at the cost of detail about the dominant form of radio: music radio. The essay on music is very strong, but concepts of playlist, rotation, clock, as well as music programming as a mechanised activity are central to understanding why radio is as it mostly is, and they have no entry.

This is a book worthy of your attention; students will find it an essential aid to their studies, and it may even go someway to ensuring that the study of radio is as important in the academy as its visual cousins.