The Wars of the Roses

First performed on stage in 1963, The War of the Roses was in many ways the production that came to define the newly-formed Royal Shakespeare Company. Masterminded by Peter Hall and writer and co-director, John Barton, this hugely ambitious adaptation recalled Orson Welles’s earlier stage play Chimes at Midnight (1960) in its scope and audacity. In order to reshape four of Shakespeare’s history plays - the three parts of Henry VI, which were often considered unwieldly, if not unperformable, and the far better-known Richard III - into a trilogy, Barton made substantial cuts, but also added several hundred lines of his own. The plays were subsequently staged in Stratford-upon-Avon, on a set designed by John Bury, resemblinh a giant steel cage. The cast comprised theatre stalwarts such as Peggy Ashcroft and several newcomers including David Warner, Ian Holm and Janet Suzman. 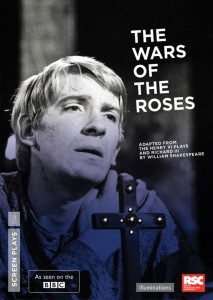 The production was widely acclaimed and was therefore an obvious choice to form part of a new collaboration between the RSC and the BBC, who had secured the rights to record and broadcast four of the Company’s productions during the 1962 and 1963 seasons. The resulting three films, Henry VI, Edward IV, and Richard III have become legendary in television history circles. Broadcast over three nights in 1965, The War of the Roses did far more than simply preserve an exceptional stage production for posterity and help introduce the general public to some unusually gifted young actors. It also changed the way in which theatre was televised. Shot in Stratford-upon-Avon in late 1964 on the original set (which was too large and heavy to be moved to a sound studio in London), the BBC’s technicians excelled themselves, building large wooden platforms which could support up to 12 video cameras and sound equipment. They also dug pits to create expressive high angle shots and pioneered a ‘creeper’ camera which captured the action close to the stage floor (this is shown very effectively in the final battle in Edward IV), and mounted a camera on a sixteen-foot tower which enabled them to simulate crane shots and film on Bury’s metal battlements. Moreover, a state-of-the-art Japanese Ikegami hand-held electronic video camera was brought in and used to give even more immediacy to the production’s numerous battle scenes.

There is more to these television films, however, than mere technical flash. On the contrary, many of the most memorable moments consist simply of a shot of an actor’s face, filmed in close up, and often held for several minutes without a cut (Warner’s reading of Henry VI’s ‘Molehill’ speech, provides a particularly excellent example). Hall’s decision to have the actors look directly into the camera (there’s more than a hint of Brecht here) during their soliloquies is especially effective, and the combined result of these intimate moments, and the more visually and technically ambitious scenes, no doubt served to make The War of the Roses one of the most immersive television experiences of its time. To say that this new three-disc set from the BBC and Illuminations is welcome would be an understatement, and in many ways these productions are a good deal more energetic and visually alive than the BBC’s subsequent attempts to film the same plays in the late 1970s and early 1980s.

In hindsight, The War of the Roses perhaps suffers from being so innovative. Almost all the techniques pioneered in the three parts have been used in countless television dramas since then, not to mention in Shakespearean film adaptations such as Tony Richardson’s 1968 film of Hamlet. Moreover, the mobile cameras, shifting angles, and lingering close ups that would have caused such a sensation in 1965 can now be seen in almost any of the live transmissions of a stage performance in recent times. As a result, these productions might seem a little passé to a younger audience. Indeed, teachers wanting to expose their students to a well-filmed version of these particular history plays might perhaps prefer to stick to the BBC’s The Hollow Crown, which is more accessible for being in colour and features a starrier (but by no means superior) cast. For those more interested in theatre and television history, however, The War of the Roses is unquestionably the more essential purchase. Students of acting will also, no doubt, learn a great deal from watching scenes like Ashcroft’s Queen Margaret seducing Suffolk in Henry VI, or Holm’s Richard murdering Warner’s Henry in Edward IV, filmed in such an intimate way, with every gesture and expression visible, and the voices lowered to whispers.

The extras are limited to a 20 minute ‘making of’ documentary, which compromise short interviews with Warner and Suzman. There is also a short booklet with informative notes about the production and its subsequent filming by Illuminations director John Wyver. Much more will be written about The War of the Roses now that it is finally available to students and researchers. It is heartening to see the BBC and Illuminations trawling through its archive and unearthing gems like this.