About the reviewer: Dr Helen Jacey teaches scriptwriting at Bournemouth University. She is a screenwriter, author, and story consultant working on film, TV, radio, advertising and fiction for the UK and international industry. Helen has developed projects for numerous UK, European and US producers, including Gareth Wiley, Harbour Pictures, BBC, UK Film Council, and is currently developing several feature film screenplays for producers in the UK and the US. Helen’s first book The Woman in the Story (2010) has been described as the seminal screenwriting guide to creating stronger female characters. Her most recent book is another volume in the Writing for Film and TV guides from Creative Essentials, Writing and Selling - Romantic Comedy Screenplays (2014) co-written with Craig Batty.

The first thing that jumps out when you open Writing for Television Series and Soaps is that Yvonne Grace isn’t only a humorous and entertaining writer, she’s brilliantly motivated to help the aspirational British writer understand the reality of writing for established British TV series. From the sparkling opening pages in which Grace hilariously describes her very own fall from grace as a script editor on a long running soap: ‘It was like farting before the Queen – you just didn’t do it.’ It’s clear that this book isn’t ‘going to pull any punches in telling the reader how it is, from an insider’s view. 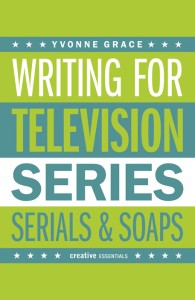 I am an unashamed fan of the industry ‘how to’ (not only because I have written a couple myself) but due to the fact that most students who want to be writers need to understand the realities of the industry they seek to break into. This approach can be on the receiving end of academic criticism that bewails lack of contextualisation or critical engagement, but this surely misses the point of these books as essential sites of professional knowledge that are born out of lived- experience and that connect with the uniquely hungry and creative energies of writers.

This is probably the book’s unique selling point – the mechanics, the processes, the craft and skills and the know-how of writing on established TV series and soaps, from the rarely documented point of view of a script editor. The book’s focus is writing for traditionally commissioned TV writing for broadcast. It doesn’t attempt to discuss transmedia forms of series, such as online web-series. The book makes a refreshing change from the US-centric range of television writing books, which – however excellent – can lack relevance to writers who hope to earn a living from working in British TV.  Grace’s approach is sufficiently detached enough to combine industry insights with clarity, achieving a highly accessible level for both the student and aspiring and ambitious TV writer. This kind of approach, industry savvy and yet empathic (she addresses the reader throughout), will strongly appeal to students on scriptwriting courses – particularly those from the UK.

The structure of the chapters is comprehensive and easy to follow, with snappy and buzzy titles such as It’s All About the Story, followed by It’s Also All About The Storyline’. The content encompass Grace’s own experiences, the DNA of a TV writer, skills that writers’ need to develop, the story development process, and working to commission. Particularly valuable is the chapter with interviews with television writers working on heavyweight series such as Coronation Street, Emmerdale and Eastenders. These validate much of what Grace has set out, but also add personal and series-specific meat to the bones on ups and downs of breaking in and the realities and successes of working on a series.

Students in the UK studying scriptwriting, creative writing, TV production and media courses would do well to read this book, with its practical focus and instructive guidance on the realities of writing for series in the industry. Whilst it has a very contemporary relevance in terms of content, references and links, the book is broad enough to be a useful guide for a good number of years to come.