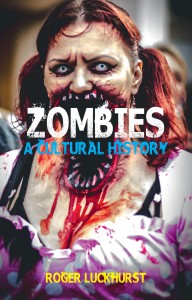 Roger Luckhurst argues that we have reached a saturation point for cultural uses of the zombie in modern global culture. This book explores this contention through a structured cultural history, with a specific drive towards identifying the transferences articulated in the “circum-Atlantic world” (14) in instances of popular culture.

This is not the first academic study of zombie texts, but the book offers a more sustained exploration of colonial and post-colonial influences than previous authors. This is achieved through eight chapters that lay out different aspects of culture and the embodiments of the zombie that they offer, contextualising the historical trajectories of how the zombi becomes the zombie.

Chapter 1 starts with the folklore popularised by Lafcadio Hearn and William Seabrook, establishing the meaning of the zombie against their own lack of engagement with racial politics. These narratives are enlarged in the next chapter on the fictional construct of Haiti in the context of American control of the island: the dialogues of cannibalism, savagery and vodun influence many representations of the zombie up until the present day. These two chapters are particularly detailed, offering a solid contextualisation for the next two chapters which focus on translations of the zombie into American culture. Chapter 3 deals with how zombies emerged in the pulps, noting how dominant racial fantasies and fears were used as key signifiers of desire and death. Chapter 4 then extends the study of print media into film, to position the emerging use of the zombie in American horror films of the 30s and 40s.

Luckhurst is very careful to engage the reader with other instances of the Zombie, showing how representations both draw upon and deny earlier embodiments as the zombie moves further into the American popular consciousness. This is sidetracked briefly in Chapter 5, when a discussion of the Harlem renaissance of the 30s leads to a case study of the anthropological studies of Zora Neale Thurston. This is a fascinating topic, but the shortness of the chapter indicates that it may be slightly out of place in the overall argument of the book. Chapter 6 then introduces a shift in tone, as we approach the historical period when changes in the depiction of the zombie may refract wider social changes and unrest after WW2, including fears of colonial atrocities, the imagery of the holocaust and ‘massification’ in culture and the threat of mass death.

The shift in Chapter 6 is representative of the problems facing any commentator on zombie culture: how to deal with the amount of primary sources that begin to emerge after the 1960s. In chapter 7 Roger Luckhurst wisely follows other commentators in opting to focus on the works of George Romero through his discussion of Dawn of the Dead (1978). This bridges the gap nicely between American and Italian film representations in the 1970s and 1980s, but unfortunately also means that other representations outside the most well-known texts are ignored: Luckhurst does not acknowledge the quantities of low budget or fan-made zombie films of the 1980s and 1990s, for example. Finally, in Chapter 8 he attempts a wide ranging discussion of modern texts, including the Resident Evil (2002 +) texts, World War Z (2013) and ongoing television series The Walking Dead (2010 +). These are thoughtful illustrations of changing embodiments of fear, introducing many new concepts to the reader such as the medicalisation discourses of death and epidemics in popular culture. However, the overall impression is of trying to cover too much material and too many approaches, to conclude that the zombie can be both emblematic of homogenized global culture but also nationally specific.

... the book is an engaging overall history for students and teachers of zombie culture generally

The book is an engaging overall history for students and teachers of zombie culture generally, with specific cultural interpretations and narratives introduced clearly. For those intending to teach or study zombie film/literature, the book is very useful in its overview of key texts and ideas, but is not an exhaustive history. The sections and arguments detailing the pre-history of the zombie are particularly useful for those engaging in teaching racial and colonial/post-colonial studies of culture.

For those seeking additional material, the edited collection by Shawn McIntosh and Marc Leverette Zombie Culture: Autopsies of the Living Dead ((2008), Scarecrow Press) offers a number of essays on specific aspects of zombie culture, including Italian zombie films and Tanya Krzywinska’s detailed approach to zombie video games. Kyle William Bishops American Zombie Gothic: The Rise and Fall and Rise of the walking dead in popular culture (2010)Mc Farland and Co.) is an interesting cultural history (anticipating the historical structure Luckhurst uses) that positions the zombie as belonging specifically to the American gothic.

More recently, and a result of the Zombosium conference at Winchester University in 2011, Laura Hubner, Marcus Leaning and Paul Manning’s edited collection The Zombie Renaissance in Popular Culture (Palgrave Macmillan, 2015) offers a good introductory section on the vitality of the zombie in popular culture, before branching into specific case studies on media forms, fans and interpretations of the zombie. A similar approach is evident in Screening the Undead: Vampires and Zombies in Film and Television, (Tauris, 2014) with editors Leon Hunt, Sharon Lockyer and Milly Williamson providing three sections of the book on vampires, zombies and ‘hybrid’ horror texts and monsters. In terms of more popular criticism of zombie film, Book of the Dead: The Complete History of Zombie Cinema by Jamie Russell (2005) FAB Press) is a good overall listing of zombie films from the 1930s onwards. It includes chapters based on periods of zombie film production, with a lively discussion of made-for-video and fan zombie films, but its value is in its use as a reference guide for film titles and details.

For specific discussions of George Romero, Tony Williams The Cinema of George Romero, Knight of the Living Dead (Wallflower, 2004) is an authoritative and detailed discussion of his career and consistent thematic concerns, and is highly recommended. There are also specific discussions of his work in Kim Newman’s Nightmare Movies (2nd Edition, 2011, Bloomsbury Publishing). An excellent text by the noted reviewer and horror fiction writer, this is a approachable starting point to engage students with histories of horror and notions of national history and trauma, as well as case studies of horror film directors.