Channel 4 has a history of broadcasting documentary-series that feature social minority groups, and in recent years there has been significant documentary coverage surrounding the theme of disability aired by the broadcaster, from Crip on a Trip (Two Four Television Productions, 2006) to Disabled Fight Club (Big Deal Films, 2015); to Disability and Abortion: The Hardest Choice (RDF & Hey Sonny Films, 2022). Additionally, Channel 4 have been the official broadcasters of the Paralympic Games since they won the rights to the coverage of the 2012 games in London, and since have even featured a fully disabled presenting team for Beijing 2022 (Channel 4, 2022b).

Regarding Tourette Syndrome specifically, Channel 4 have frequently featured coverage that is inclusive of, or specifically about, Tourettic people, whether in contestant Pete from Season 7 of Big Brother (Channel 4, 2006) or specific documentaries such as My F-ing Tourette’s Family (Coates et al., 2018), The Mum Who Got Tourette’s (October Films, 2020); or most recently Britain’s Tourette’s Mystery - Scarlett Moffatt Investigates (Firecracker Films, 2022). With significant coverage of disability in recent years, particularly regarding Tourette Syndrome, it is important to ensure that we look critically at Tourette Syndrome coverage by the broadcaster surrounding a condition that has a lot of stigma surrounding it (Bervoets et al., 2022; Cox et al., 2019; Malli et al., 2016; Malli & Forrester-Jones, 2021), particularly in light of Channel 4’s newly published New Disability Code of Portrayal (Channel 4, 2022a).

Airing on the same day as the new and strengthened Disability Code of Portrayal, the documentary titled Britain’s Tourette’s Mystery – Scarlett Moffatt Investigates directly went against many of the commitments made in the updated Code of Portrayal. The documentary featured Scarlett Moffat, investigating what she termed as searching for “…answers, to speak to the families dealing with a mental health crisis and to delve deep into my own past to try and find out if this [Tourette Syndrome] has been magnified by Covid and lockdown; if it’s now become contagious; and if social media is part of the problem.” (Firecracker Films, 2022) Whilst many areas of the code were broken, this article pays particular attention to the following statements from the code:

1. “At a portfolio level, we […] offset any stereotypes or tropes that may be editorially required within the genre”.

2. “At a programme level, we […] remove the ‘able gaze’. We avoid assumptions and projections about the disabled experience in our content, always checking for any non-disabled bias, privilege or lack of knowledge and experience”

It’s interesting to note that these aren’t necessarily promises of what Channel 4 will be working towards, but rather statements of commitments/work already made/being done. With this in mind, let’s explore some of the ways that Britain’s Tourettes Mystery goes against Channel 4’s own code.

Throughout the documentary, ‘Tourette Syndrome’ is conflated with ‘tics’; it is a common misunderstanding that tics automatically mean someone has Tourette Syndrome – this is not the case, as there are a host of other conditions of which tics are a symptom, including but not limited to Chronic Tic Disorder (Pringsheim et al., 2019) and Obsessive Compulsive Disorder (OCD) (Bolton et al., 2007), amongst others. Furthermore, the lack of knowledge and the reinforcing of correct information that demonstrated the program’s stigmatized/stereotyped understanding was demonstrated through the repeated comparison of Tourette Syndrome to ‘the common cold’ throughout the program, suggesting that you could ‘spread’ or ‘catch’ Tourette’s, not acknowledging that whilst they are suggestible if you already have TS, TS itself is not something that can be caught (Efron & Dale, 2018; Ginsburg & Newman Kingery, 2007). Repeated comparison to the ‘common cold’ in perhaps trying to say that Tourette Syndrome might be more common than we realise, is something that dangerously perpetuated this incorrect trope of Tourette Syndrome. This links to the spectacularisation of Tourette Syndrome for entertainment purposes, which goes against Channel 4’s own aims surrounding the offsetting stereotypes and tropes about the condition. Whilst some may argue that contagious is the right language to use (Müller-Vahl et al., 2021), there are many researchers who are also pushing back against these claims (Conelea et al., 2022), and so to focus on solely suggesting that Tourette Syndrome is contagious in the documentary played a part in causing panic and fear, which I argue is a part of the very spectacularisation that Channel 4 state they seek to offset.

Moving now towards the weeks prior to the airing of the documentary Britain’s Tourette's Mystery, promotional material was published on social media sites and billboards around the UK. One image in particular is of concern here: 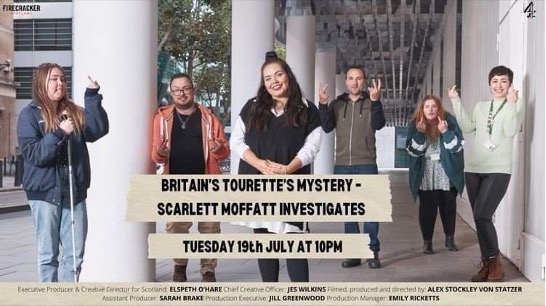 This advertisement shows 5 of the Tourettics featured in the documentary swearing at the camera by putting their middle or index and middle fingers up at Scarlett Moffatt, the documentary’s presenter, as she stands smiling in the center. After this was published, on July 19th Ryan Stevens (one of those featured in the documentary) tweeted: “I just want to publicly apologise for this photo. It was the one that was not to be used for publication, it was a gimmick shot (I was not ticcing here). One to ‘loosen up’. There are tons of other photos they could of used. I feel so deeply let down[…]” (Stevens, 2022) and attached the image shown in Figure 1 in question to his tweet. Channel 4 later removed this particular promotional image from their social media sites and replaced it with another. However, this shows that Tourettics involved in the process were actively led to misunderstand motives during the production of the documentary.

This particular example demonstrates an example of how even prior to the airing of the show, Channel 4 were not giving the disabled people featured what they “want, expect and deserve”; if we look at the language used in their press release, Channel 4 write “We have developed this Code of Portrayal to outline our clear commitments and give detailed steers as to how we go about delivering the original, nuanced and authentic portrayal of disabled people which our viewers – disabled and non-disabled – want, expect and deserve” (Channel 4, 2022c). Here, not only are they not showing an authentic portrayal of Tourette Syndrome, shown through Ryan’s tweet, but further Channel 4’s way of wording this quotation suggests that those featured in documentaries are, perhaps, outside of their area of concern.

Towards the authentic and solidarity-positioned inclusion of Tourette Syndrome

Evidently, the mark was missed in terms of Channel 4 following their own strengthened guidance. It seems a shame, especially as Tourette Syndrome is something that has been covered in documentaries previously by Channel 4 in ways that do not spectacularise or perpetuate incorrect stereotype, stigma, etc (cf October Films, 2020). So what went wrong? How might the broadcasters fix this or move forward from this?

Ultimately, there has been significant noise made regarding complaints and distress over the documentary, particularly on Twitter and TikTok, from those with a diagnosis of Tourette Syndrome themselves. The TS community clearly feels stigmatized and distressed, and perhaps if these complaints – whether on social media or made as one of the 102 official Ofcom complaints made from 26th July – 1st August alone (Ofcom, 2022) – were acknowledged and responded to then the story might be different. It seems then that the first step for Channel 4 to ensure an authentic and solidarity-positioned inclusion of Tourette Syndrome within the scope of their new strengthened Code of Disability Portrayal would be to not only platform the voices of the minoritised groups they’re seeking to represent, but also to value the words shared by Tourettic members of the public who should be considered as experts by experience.

An additional practical recommendation here comes straight from the strengthened guidance itself; Channel 4 mention disabled people being involved with editorial and production aspects of representation within programming, and that it will be closely monitored. Perhaps publishing the results of this monitoring would be a transparent way to share progress towards these targets or standards from the broadcaster. Perhaps there is also scope to extend the involvement in editorial and production aspects further. Whilst the celebrity status of Scarlett Moffatt may have increased viewership, would a Tourettic presenter have offered a better-informed line of questioning and ensured a solidarity-positioned portrayal of Tourette Syndrome? Whilst Scarlett Moffatt has experienced tics in the past, she does not have Tourette Syndrome, unlike other TV presenters who perhaps may have offered a better approach, such as Aidy Smith of The Three Drinkers (Booze Productions Ltd, 2020), or perhaps even taken the approach as per previous Channel 4 documentary The Mum Who Got Tourettes, which featured Elizabeth Hall narrating her own experiences. Most recently, the pilot of new sitcom Biscuitland, featuring Jess Thom (also known as Tourettes Hero) offered a key example of the impact that solidarity-focused programming can have when it comes to Tourette Syndrome. The pilot episode alone features moments of mundanity or everyday experiences for those with Tourette Syndrome, which, for clarity, is a good thing. The refusal to allow Tourette Syndrome to be spectacularized for comedic effect here is done through including non-tourettic characters within the humour, and having very relatable and real-life conversations that include tics. I argue that this was only possible through involving tourettics, such as Jess, throughout the entire process – the pilot episode credits Jess under the ‘written by’ and ‘created by’ sections. However, thinking back to Britains Tourettes Mystery - Scarlett Mofatt Investigates, it is not enough to look to the future for solidarity-positioned programming. It is not up to people to create new documentaries or sitcoms that undo the damage of previous programming decisions, and this is where, once again, a public response or acknowledging of complaints and damage would be a great first step to demonstrate Channel 4’s commitment to disability representation.

Taking this into account, I argue that a solidarity-focused approach to future programming, direction, representation and so on for Channel 4 as a broadcaster is vital in order to ethically progress with disability representation through broadcast as a mode of sharing information. By this, I mean to say a focus on unity and agreement with those who are being represented, in a way that ensures mutual support and prioritises the wellbeing of not only those within the programmes being aired, but also the wider community. This means a potentially participatory approach, where solidarity can be practiced through including Tourettics (in this instance) in every stage of the process, from planning, to filming, to editing, to marketing. In celebrating 40 years of Channel 4, it’s important that we consider productive shifts in approach as a part of that celebration, and take the time to acknowledge mistakes that have previously been made. In doing so, we can ensure that we keep pushing towards a more inclusive, representative, and caring approach to platforming the voices and experiences of disabled communities.

October Films. (2020, April 9). The Mum Who Got Tourette’s. Channel 4. https://www.channel4.com/programmes/the-mum-who-got-tourettes