On the 26th June 2019 the University of Edinburgh hosted the second Icepops conference and we were grateful to Learning on Screen for being one of the sponsors of the event. Icepops is the ‘International Copyright-literacy Event with Playful Opportunities for Practitioners and Scholars’ and was devised by me and Chris Morrison. When we first ran the conference in 2018 we had no idea if people would come and if it would be just a one off event, but after the first year’s success we were keen to run the conference again.

Chris and I take a playful approach to copyright education. It’s not that we don’t think copyright is a serious matter, we do, but we’ve found that developing games on aspects of copyright has provided a more engaging way of teaching others about the issues. Our games ‘Copyright the Card Game’ and ’The Publishing Trap’ are also openly licensed so people have downloaded, adapted and used them in the UK and further afield. In order to build on this we thought it would be useful to hold an event to where we could share our experience with others who were also interested in the relationship between playful learning, copyright, information literacy and scholarly communication. There are plenty of professional development opportunities in relation to copyright but very few that focus on playfulness and encouragingly creative approaches to teaching. That's really how Icepops came about and so this year we were delighted to be joined by just over 80 delegates.

One thing to note was despite its relatively small size, both years we’ve run the conference, Icepops has attracted international delegates from as far afield as New Zealand, Australia, Canada, the US and a variety of European counties. We’ve also been keen to welcome delegates and presenters from education and the creative industries and had speakers who are publishers, librarians, academics and representatives of rights holder organisations.

Icepops 2019 was held at the University of Edinburgh, partly because they have a really pioneering open education policy, spearheaded by Melissa Highton, their Director of Learning, Teaching and Web Services, who opened our conference. We also wanted to hold the conference in Edinburgh because it’s such a beautiful city and we found an amazing venue on the university Pollock Halls site. The city did not disappoint us and the organising team led by Anne-Lise Harding (South Essex College) and Eugen Stoica and Louise Dutnell at Edinburgh University library were a fabulous team.

Our first keynote this year was Simon Anderson, from music publishers The Audio Network, who gave an engaging (and musical) performance entitled 'Stop me if you think you’ve heard this before’. Simon gave an interactive presentation using audio and music score examples to illustrate real-life and specially prepared music copyright infringement cases. We looked at the cases that have been considered by the courts and the reasons behind key decisions. Delegates got to play judge and jury using ‘traffic light’ voting cards to make their own mind up! 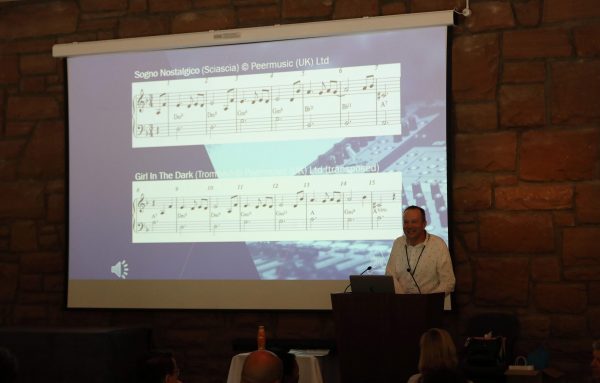 In the afternoon the keynote was given by Charlie Farley from the University of Edinburgh’s open education team. Her talk was entitled ‘Make and release: embedding practice through play' and she also led an interactive games jam after the talk. Charlie explained how fear of failure, fear of not being taken seriously, fear of not being an expert or ‘knowing enough’ can halt and obstruct learning at all levels. She shared her experiences of creating a playful environment to empower learners (from undergraduates to tenured staff) to experiment and engage with copyright concepts and practices away from fear and apprehension. 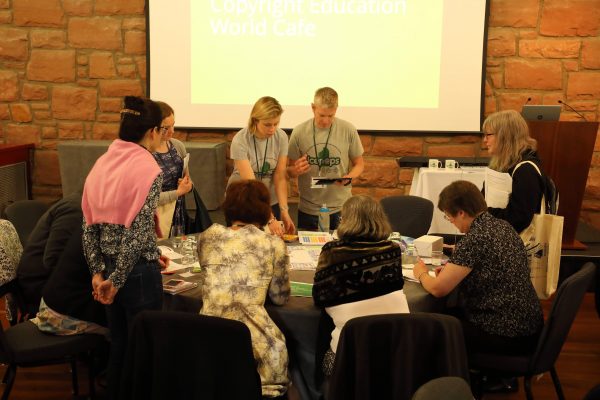 Building on the first year's success, we extended our World Cafe sessions at Icepops 2019. In this high energy session, people moved around 9 different tables hearing short talks and demonstrations from a variety of speakers. You can see the full line up on the website but Jeff Izzo from California State University demonstrated his Wheel of (Mis) fortune, Catherine Parker and Kate McGuinn from University of Huddersfield showed the Game of Open Access and Neil Sprunt from University of Manchester shared his four online copyright resources for staff. There were also two chances to experience the Open Access Escape room devised by Kat Sundsbø at the University of Essex and Chris and I revealed a prototype of version 2 of our game, The Publishing Trap (see photo above).

We had a round of Pecha Kucha style rapid-fire talks (20 fixed timed PowerPoint slides) and 7 lightning talks. These covered a really wide range of topics from the British Library’s Matt Lambert telling us about the Brexit orphan work saga, to Harvard’s Kyle Courtney talking about text and data mining both sides of the Atlantic. Denis Legaza from the Hungarian Intellectual Property Office explained how Collective Management Organisations manage rights and Amy Haworth and Ruth Mallalieu talked about creating copyright literate citizens at the University of Sheffield. You can see the full line up of speakers here.

Our evening social at the University of Edinburgh’s Students Union included not one but two house bands, made up of conference speakers and delegates. First up was the All Rights, a classical musical ensemble made up of Karen McAulay, Stephen Penton and Ruth Mallaleiu. In between we had a comedy stand up performance by Claire Kidwell of Trinity Laban Conservatoire. Then next up was the rock n roll band The Infringers, led by Chris, Jeff Izzo on bass, Simon Anderson on keyboards and Debbie McDonnell on vocals. They performed some mash up tunes that were subject to copyright course cases, and then gave delegates the opportunity to do live karaoke with them. The evening culminated with most of the audience on the stage singing Abba’s ’Thank you for the Music.’ What a night! 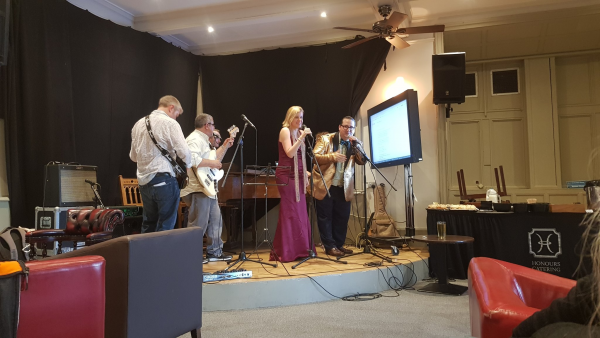 If that wasn't enough on the second day we organised a tour of St Cecilia's which is Edinburgh's beautiful Georgian music hall and museum. And we hosted the first meeting of the international copyright literacy community of practice over lunch. Over 25 people attended the international event to discuss how we might continue the conversation after the conference. The group have set up a Slack community which is starting to be joined by people from around the world. If you are interested in joining this community then do get in touch.

And if you are interested in copyright education and believe in a playful approach to teaching, then Icepops is the event for you. We may eventually decide to hold the event bi-annually but in the meantime we are planning a conference for 2020 and we’ll be announcing the location and details in the next few months. Keep an eye on the copyrightliteracy.org website for further details. You can find out more about this year and last year’s conference from the website: https://copyrightliteracy.org/upcoming-events/icepops-international-copyright-literacy-event-with-playful-opportunities-for-practitioners-and-scholars/

Jane Secker is Senior Lecturer in Educational Development at City, University of London, where she teaches on the MA in Academic Practice. She is the former Copyright and Digital Literacy Advisor at LSE. She is Chair of the CILIP Information Literacy Group, a member of the Libraries and Archives Copyright Alliance and the Universities UK Copyright Negotiation and Advisory Committee, which negotiates licences for the higher education sector. She is widely published and author of four books, including Copyright and E-learning: a Guide for Practitioners, the second edition of which was co-authored with Chris Morrison and published in 2016 by Facet. She tweets @jsecker.