A New History of British Documentary

About the reviewer: Michael Chanan, Professor of Film & Video at the University of Roehampton, is a documentary filmmaker who also writes on both film and music. His most recent film is 'The American Who Electrified Russia' (2009, 105 mins). His latest book, The Politics of Documentary, was published by the BFI in 2007. He has a range of special interests, including Latin American cinema, documentary, the film soundtrack, and the social history of music. In 2000, he was Visiting Professor in the Literature Program at Duke University, USA, and then joined the University of the West of England where he was Professor of Cultural Studies, 2002-2007.

Year after year, teaching about documentary in a British university, one faces up to the marginality of documentary to the popular film culture which draws students to want to study film. For the vast majority of them, documentary is a subgenre of television which occasionally breaks through onto the big screen. The rich tradition of documentary is unknown to them. They are not very interested in its history, and have even less familiarity with it than they have with the history of mainstream cinema, of which their knowledge is pretty patchy. If they've studied film before they get to university, they might have seen one or two of the canonic social documentaries of the 1930s, produced by the GPO Film Unit under John Grierson, and might remember that it was Grierson who gave the word 'documentary' its currency. The films themselves, without a better appreciation of the historical context in which they were made, are all too liable to appear antiquated and quaint. There is not a lot of space in the curriculum to rectify this.

In his A New History of British Documentary, James Chapman sets out 'to show...that documentary did not begin and end with Grierson'. He takes the chronology back to the early years, and forwards to television as far as the 1990s, with a final chapter on alternative and oppositional documentary from the 30s to the late 80s. There are numerous useful facts and figures, including discussions of the institutional contexts of production, but there is little original research; the author describes it 'a partially researched text book'. He also advises the reader that it isn't a history of the films themselves, of which only a dozen or so are given any extended account. Chapman gives useful summaries of the debates around them. 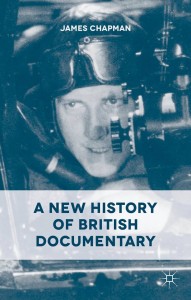 However, the book is not based on close viewing of the stream of films under discussion. Brief comments about this or that title exemplifying skills of exposition or innovation in technique come across as received opinion, and often without explanation of how or why. There is very little attention paid to the development of film language, either in terms of cinematography or of editing, still less of sound. This is a purely external history, with no grounding in the history of documentary artistry, or the relation between technique and technology, like the transformation of documentary when synchronous sound location filming first became practical at the end of the 1950s. There is no proper discussion of crucial elements of documentary like the use of commentary, or issues like questions of authorship or the ethics of documentary. Even some of those useful discussions of institutional contexts are unbalanced by obscuring political factors. There is no mention, for example, of how many television reports about Northern Ireland were censored or suppressed as a result of government pressures, or the infamous and largely unworkable broadcasting ban imposed by Mrs Thatcher in 1988, intended to deny the terrorists and their sympathisers ‘the oxygen of publicity’. There are occasional references to aesthetic trends in other countries, but they do not overcome the limits of this kind of national narrative.

I found one or two small errors. For example, the 1901 faked actuality Attack on a China Mission was made by James Williamson, not Mitchell and Kenyon – an interesting film because it exists in two versions, the second including interpolated reverse action shots which demonstrate the birth of narrative editing; but this belongs to those questions of film language which are entirely absent here. There are also other omissions. Chapman says he wants to restore television documentary to its rightful place, but shows nothing of the powerful and innovatory work of Dennis Mitchell (who gets one passing mention) or Philip Donnellan; Nick Broomfield gets a few inadequate lines; and Adam Curtis is also absent. This is not a matter of personal predilections: they are all consummate documentarists of the first rank.