Blood upon the Snow: Russia’s War

About the author: Dr Nick Baron is Associate Professor, Faculty of Arts University of Nottingham and author of The King of Karelia: Col. P.J. Woods and the British Intervention in North Russia, 1918-1919 (2007, Francis Boutle). E-mail: nick.baron@nottingham.ac.uk

... the first major television production to direct the western public’s attention to the heroism and, particularly, to the horrors of the Eastern Front

The collapse of the USSR in 1991 brought about unprecedented access to the formerly secret Soviet state and party archives, as well as unimagined opportunities for collaboration between Russian and western historians and filmmakers. The British-Russian documentary television series Blood upon the Snow: Russia’s War (1995) was one of the earliest and most important products of this new openness. In ten fifty-two-minute episodes, it traces the rise of Stalin and the Soviet experience of the Second World War. As such, it was the first major television production to direct the western public’s attention to the heroism and, particularly, to the horrors of the Eastern Front, and the first to bring to light archival footage and interviews with eyewitnesses of events. By contrast, the landmark series The World at War (1973-74) devoted no more than three of its twenty-six hour-long episodes to the Eastern Front. 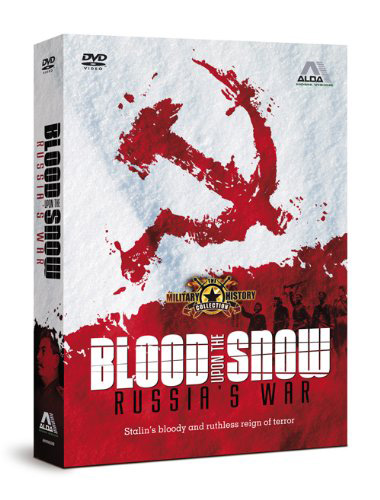 Former US Secretary of State Henry Kissinger opens each episode with a brief scene-setting monologue and ends each with a few words anticipating the next instalment. While Kissinger’s interventions add little to the historical analysis, his presence serves to emphasise the world-changing significance of the subject matter to a western audience. British actor Nigel Hawthorne provides the main voice-over for the series. His grave lilting tone is well chosen to convey the tense and frequently harrowing drama of the story as it unfolds.

The first two episodes, ‘The Darkness Descends’ and ‘The Hour Before Midnight’, chart Stalin’s rise to power, his policies of mass mobilisation and repression in the1930s and the immediate international and domestic background to the outbreak of war. The next two episodes, ‘The Goths Ride East’ and ‘Between Life and Death’, consider the Nazi invasion of June 1941 and the Germans’ rapid advance into Soviet territory, including the siege of Leningrad and the assault on Moscow. The fifth instalment, ‘The Fight from Within’, offers an analysis of Nazi occupation policies, including the deportations of forced labourers to the Reich and the perpetration of mass murder against civilians, as well as the Soviet partisan movement that fought against the invaders within occupied territories. The Battle of Stalingrad of August 1942 to Februrary 1943, the turning-point of the war in the east, is the subject of episode six, ‘The Caldron Boils’.

The next two episodes, ‘The Citadel’ and ‘False Dawn’, focus on 1943-1944 and the Soviet advance westwards, the USSR’s social and industrial mobilisation, the lifting of the Leningrad siege, the military strategy and political reasoning that determined the pace and direction of the Red Army’s entry into Eastern Europe, and revelations of the Holocaust. The final two episodes, ‘The Fall of the Swastika’ and ‘The Cult of Personality’, describe the Soviet capture of Berlin and the death of Hitler, Stalin's moves to dominate and occupy the newly-liberated East European states, the origins and early course of the Cold War, and post-war policies of reconstruction and renewed political repression in the USSR up to the dictator’s death in 1953. 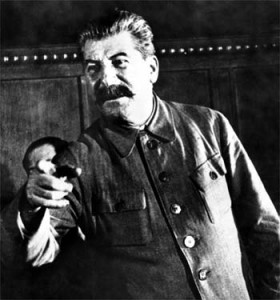 The series presents what was even in 1995, in the scholarly historiography, an outmoded view of Stalin’s Soviet Union. It reinforces rather than seeks to challenge popular preconceptions about the dictator’s rule. Analytically, it tells a simple story, one that follows the path of least empirical resistance. The dictator himself is an evil genius, driven by pathological paranoia and an ‘asiatic, medieval ambition’, who from the mid-1920s carefully planned his path to ‘the most absolute form of power ever achieved’. The Soviet people themselves, duped in the early years of his regime by his ‘propaganda and lies’ to believe that they were experiencing real social progress and to acclaim his leadership, were later subjected to absolutely unrelenting torment and torture. In the 1930s Stalin declared ‘war on his own people’, we are told, and annihilated over twenty million people by shooting, starvation and forced labour. The remaining population was held in thrall by the ‘hypnosis of power’. During the war, Stalin was impelled only by a ‘lust for glory’, caring nothing for the army or his people. This traditional ‘totalitarian’ account (reflecting also the immediate post-Soviet Russian view) offers a straightforward dramatic account but, unfortunately, does little to explain the immensely complex and contradictory phenomenon of Stalinism. For a full understanding of this history, it is as relevant and vital to study the sources of popular enthusiasm for Stalin and social participation in the system as it is to examine the origins and course of terror and repression.

The documentary’s analysis is also marred by errors: the chronology of events is mixed-up, especially in the first two episodes; the visual images frequently show something quite different to what the commentary describes (there is an over-reliance on generic images of fighting troops, generals with maps, burning buildings and anguished or jubilant civilians with no relationship to the specific time and place being discussed); quotations are used out of context (for example, Anna Akhmatova’s poem Requiem of the late 1930s is cited in relation to events of 1928); and the English narrative includes mistranslations (for example, STON instead of SLON for the Solevetskii islands labour camp in northern Russia).

The documentary is compelling viewing, with some breathtaking footage ...

Alba Home Video have presented this edition of the series on four DVDs in an attractively packaged box-set. The documentary is compelling viewing, with some breathtaking footage and a powerful original musical score, and will be of greatest interest to those with a general interest in the Second World War. For students and scholars of Soviet political and social history, however, its commentary will be found lacking analytical sophistication and its principal value lies in its extensive use of hitherto mainly unseen archival film and interviews with participants in events.