Home Viewfinder MagazineHollywood and the Americanization of Britain

Hollywood and the Americanization of Britain

About the reviewer: Dr Sheldon Hall is a Senior Lecturer in Stage and Screen Studies at Sheffield Hallam University. He is the author of Zulu: With Some Guts Behind It (2nd edition, 2014) and co-author of Epics, Spectacles, and Blockbusters: a Hollywood History (2010), and is currently writing Armchair Cinema: Feature Films on British Television for publication in 2016. He also provided on-camera interviews for such recent home video releases as Cornel Wilde's The Naked Pray (Masters of Cinema, 2015) and Sydney Pollack's The Three Days of the Condor (Masters of Cinema, 2016)

Among the leading practitioners of the ‘New Film History’, Mark Glancy is an American-born, British-based scholar perhaps best-known as the author of When Hollywood Loved Britain: The Hollywood ‘British’ Film 1939-45 (1999), a study of American-made movies set in Britain. With his new book he turns his attention to the reception of American movies, and more broadly American popular culture, within Britain. And while the previous book was confined to exploring a single brief period, its successor (not in any way a sequel) ranges widely over the whole history of the British fascination with Hollywood, encompassing the silent and early sound eras, the ‘classical’ studio system and its transition into the modern film industry. This impressive breadth is matched by the depth and detail of Glancy’s research on particular topics, with an array of contemporary sources consulted to provide insights into some of the most popular U.S. films, stars and genres over eight decades.

After an initial chapter setting out the fears commonly expressed by journalists and educators of the effects of widespread Americanization (Glancy makes a point of noting that his use of ‘z’ betokens the Oxford rather than the American spelling of the word) the book moves on to a series of exemplary case studies. An account of Rudolph Valentino’s stardom also allows for a thorough study of the discourse of popular journalism in the form of the fan magazines that mediated the image of the movie actor said to be the most popular of the 1920s. Two chapters cover the advent of synchronised (or synchronized) sound and its impact, one focusing on the importance of speech and its conveyance of class and nationality, the other on the early 1930s’ gangster cycle and its seeming glamorisation of an exotic (to UK viewers) form of criminality. 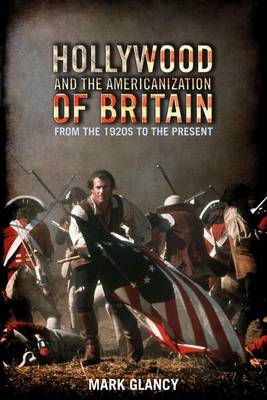 A chapter on Gone with the Wind (1939), commonly thought to be the movie most widely seen in British cinemas, examines the ambivalent attitude of the film trade towards its success. Indeed, ambivalence is a linking thread throughout the book, as British audiences’ affection for (almost) all things American is often regarded with suspicion or downright hostility by professional commentators. Critical disdain for Grease (1978) was contrasted with wholehearted public enthusiasm – again, the exoticism of American high-school life (or its romanticised representation) helps to account for much of its appeal on this side of the Atlantic – but that for Mel Gibson’s War of Independence epic The Patriot (2000) was echoed by audience indifference and even outright hostility, as expressed by online user reviews. This is the only sustained example Glancy gives of a film largely rejected rather than accepted by British spectator-consumers.

Perhaps the most interesting chapter, for this reader, is the study of the ‘American Film [Genre] Par Excellence’, which looks at the early popularity of Western films and series on British television as well as in cinemas, and takes The Big Country (1958) as its main example of a box-office blockbuster. But this also raises the one significant reservation I have about the book: its reliance on dubious evidence for empirical proof of popularity. Reliable UK figures for either earnings or attendances for particular films are hard to find, but a source cited a number of times is the BFI’s ‘Ultimate Film’ list of the 100 allegedly best-attended pictures, a list which gives little indication of how its (mostly estimated) figures were arrived at. On this basis, The Big Country is said to be the all-time most popular Western in the UK, which seems to me unlikely (Duel in the Sun and How the West Was Won are more probable claimants to the title); but this would matter less if Glancy did not make the argument that the film’s exceptional popularity was seemingly related to its own ambivalence about the frontier ethos. When his research and analysis are otherwise so rigorous, it’s a little disappointing that he should rely for this point (and similar claims elsewhere about commercial success) on an untested secondary source.

Nevertheless, this is a minor blemish on what is otherwise a remarkable achievement. In its scope and detail, and in the density and variety of its contemporary references, the book is a compelling and mostly convincing historical investigation. It is fluently written, aside from a smattering of minor typos, and handsomely produced. One hopes that a paperback edition will soon be forthcoming to increase its accessibility for students and lay readers.