Home Viewfinder MagazineReview: The Pleasures of the Continent - the BBC Maigrets

Review: The Pleasures of the Continent - the BBC Maigretsby Charlotte Brunsdon

How wonderful that all four of the BBC’s 1960s Maigret series are finally available. For many years, with the exception of a few pirated episodes, it has only been possible to view a limited number of episodes and fragments through the British Film Institute archive, although the BBC Written Archives hold very extensive documentation on the productions. This boxset is one of the first fruits of the discernible new activity in the Georges Simenon estate (GSL) which has recently announced a deal with the BBC to revisit Maigret. With the exception of Sherlock Holmes, Jules Maigret is the most televised of all detectives, and there is something about the attention to the detail of everyday life in his method of investigation which is particularly appropriate for television, making him perhaps also the most televisual. The 1960s British version was the first of many tv adaptations of Georges Simenon’s Maigret stories which he had commenced in the 1930s, and which had already been filmed with stars such as Jean Gabin. French language versions, with Jean Richard (1967-90) and Bruno Cremer (1991-2005) were popular and long-running, while there have also been television adaptations in Russia, Italy, Holland and Japan, and there have been two subsequent British versions, with Michael Gambon, and woefully, more recently, with Rowan Atkinson. With a theme tune that many older viewers can still recall – try them – these BBC programmes represent the finest English language version, while Rupert Davies – alongside Bruno Cremer – is a convincing Maigret. Maigret brought the streets of Paris into British living rooms in 1960, with its flattering assumption that the notoriously monolingual British public could cope with ‘Monsieur le juge’, ‘au revoir, patron’ and an aperitif. At a time when Britain was waking up to the delights of the continental table - Elizabeth David’s cookery books Mediterranean Cooking and French Country Cooking were in paperback by the early 1960s – the BBC produced a television series in which the lead detective sat down to a proper lunch with wine – and salad. 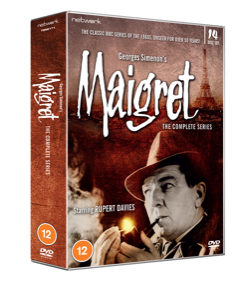 So keen was the distributor to get this box-set reviewed that I have been supplied with nothing but the eleven discs – no box for the set, no credits, and no information about the origins of the material. So vivid are my memories of the many hours I have spent chasing down and viewing available episodes when I was writing Television Cities that I was willing to do this, just to see what the complete series looked like. One of the reasons it has been impossible to view the Davies Maigret are the terms of the original BBC contracts. Mme Maigret handled all contractual matters and was ferocious in her defence of her husband’s intellectual property, negotiating contracts which included the physical deposit of the films with the family in Switzerland after one or (exceptionally) two broadcasts. The BBC was in the main pleased to be saved the storage problems which were already troublesome because of the multiple formats in which the episodes were recorded (to enable world-wide export). What actually went to Switzerland and what stayed in England is not recorded, nor is it clear what happened to some of this material. John Simenon, the author’s son, and chief executive of GSL, in an interesting interview included as a DVD extra, reports that the family, who lived in Switzerland, did not, of course, see the series as broadcast in the 1960s. He also expresses some pity for the BBC executives negotiating with his mother, describing her as a rottweiler in these matters, a judgement that reading the contract correspondence confirms.

At the end of the first disc there is a short ‘Restoration Featurette’ which outlines the processes through which the DVD set has been produced. The producers have chosen to use a split screen ‘before and after’ format to explain their interventions, which, as would be expected, generally demonstrates that their choices enhanced the image. When I was invited to review the DVDs, I cautioned that I didn’t have the technical knowledge to comment on the quality of the technical restoration, beyond saying, as I can, that in the main, for 1960s television, this looks fairly good. The aspect ratio has been maintained, so there’s no stretching, and French subtitles have been added for any French viewer who might want to see what the British made of 1960s Paris and one of its most-adapted set of stories. Paradoxically though, the expense and prestige of the original production, which entailed regular trips to Paris for cast and crew for filming, has presented particular problems for digital remastering.

In the originals, as with most surviving British television drama of the period which was considered prestigious enough to merit the use of film for exteriors – Ken Loach and Tony Garnett’s Up the Junction (1965) is a good example – there was a perceptible difference in image quality in the transition between studio and exterior filming. The quality of some of the film of Paris streets, or the canals which feature in more than one story, was exquisite, and provides an inadvertent archive of the city of the French New Wave. Because of the difficulties of the French location filming – with many of the production team and actors unable to speak French – there was a tendency, if there was time and film, to shoot ‘spare’ street scenes without actors or extras, just in case a little location detail was needed. These empty, often slightly eerie, scenes alone repay the attention of any scholar interested in Paris on screen, or the history of the television city. The producers of the reissue appear to have been working from surviving Canadian telerecordings - episodes that have been scanned for broadcast - which has produced particular problems about the relation between material originally shot on film and videotape material. In the remastering, these transitions have been smoothed out for the modern viewer. Maybe this is the right decision for what they call ‘viewability’, and they certainly suggest that the film material would otherwise have been unwatchable, but for the scholar it produces a loss of texture in the dramas which nevertheless remain unmistakeably old television.

The final drama included on the box set, ‘Maigret at Bay’, comes from the end of the decade, and is a stand-alone feature length adaptation from the BBC’s Play of the Month series. As a Play of the Month made in 1968-9, this production had a bigger budget, and consequently more location filming, than the series episodes, which were themselves expensive productions. However, for the twenty-first century viewer, the key distinction is that the exterior film sequences still exist as film, while the production as a whole has been preserved and thus we are not watching once-broadcast television. And how fabulous Paris looks! For looks, and the clarity of the image, I’d advise any viewer new to the BBC Maigret to start here, on disc 11 of the box set. It gives such a vivid sense of the freshness of the appearance of the French capital in British living rooms. It also shows, in its treatment of an abortion story (only just legal in Britain, still illegal in France), the way in which 1960s British television drama engaged with the contemporary. However, it is also a melancholy story in which Jules Maigret is contemplating his own retirement from the life which occupies him so totally, just as it exasperates his long-suffering wife. To feel the poignancy of drama, to want to sympathise with the trouble he gets himself into, you need to have some sense of Maigret as a character and to have observed his characteristic responses to human frailty through the sequence of often shabby crimes which fill his days in the series. To do this, you need to have become familiar with Maigret, his team, his home and his routines in the earlier series, and particularly the very skilful way in which the last two episodes of the fourth and final series bring Maigret’s career near its close – as well as including a trip to the Riviera. So maybe a new viewer shouldn’t start here, but save it as a treat after starting at the beginning. And the BBC’s choice of first episode, here called ‘Murder in Montmartre’ (‘Au Picratt’s), does reveal the way in which the series allowed the Corporation to feature stories of a more sensual criminal underworld far from the contemporary territory of Constable George Dixon of Dock Green, or even the troubled streets and home lives of NewTown in Z Cars.

Rupert Davies’s subsequent career never matched the success of his Maigret years (1960-63), which perhaps explains his appearance in the most surprising of the extras included on this DVD which also include a South Bank Show interview with Simenon. A short titled ‘Holiday Time no 2’ turns out to be television advertising for continental holidays in 1966, just as the package holiday market is taking off. Nestled between a travel agent’s sales pitch and an explanation of how easy it is to take a car ferry trip across the Channel, there is a short film of Rupert Davies, with a pipe, in a setting that looks quite like a Maigret set, except that he has a slide projector on his desk. Obviously selected because the role of the Commissaire has rendered him, to a British audience, simultaneously British and French, Davies encourages viewers to undertake a continental holiday: ‘Ever been to the Continent for a holiday?’, he asks, ‘It’s marvellous – even the sun shines brighter’. He then uses the slides to show the benefits of a package holiday – which include three bottles of wine per person – reassuring viewers about how easy and economical an all-inclusive trip would be.

This now poignant afterimage of Maigret was, I have to admit, the highlight of the box set for me, almost matching the enormous pleasure I always get from the fabulous, modern 1960s final credits of each episode. The modernity of Maigret in 1960s Britain, the allure of the Continent for the British holidaymaker, the location glimpses of France and Paris, the ambitions of the 1960s BBC to export its programmes worldwide, as well as the enduring pleasures of an early television cop series – all of these are now available for further exploration by non-specialist audiences and for scholars and teachers in many disciplines.

Charlotte Brunsdon is author of Television Cities: London, Paris, Baltimore (2018) and editor of Stuart Hall, Writings on Media: History of the Present (2021). She is Professor of Film and Television Studies at the University of Warwick.

George Simenon's Maigret The Complete Series box set can be purchased at https://new.networkonair.com/maigret