About the reviewer: Dr. Ashley D. Polasek is an Honorary Fellow of the Center for Adaptations at De Montfort University, an Instructor of English at Tri-County Technical College and a Fellow of the Royal Society of Arts. Her PhD is on the evolution of Sherlock Holmes across screen adaptations.

With the recent resurgence in adaptations of and interest in Sherlock Holmes, the BFI’s decision to release the BBC’s Sherlock Holmes (1964-5) on DVD in the UK is both understandable and auspicious. The programme has been available as a two-disk, region 1 set since September of 2010, but that release neither presented quality remastered transfers nor any extras. This four-disk set provides both, and is essential viewing for those who want a more complete picture of the long arc of the Holmes phenomenon.

While the programme itself is a bit stolid at times, it is a vital piece of the history of Sherlock Holmes on screen. The thirteen episodes starring Douglas Wilmer and Nigel Stock set the standard for period adaptations on television, and are a clear precursor to the more well-known programme from Granada starring Jeremy Brett, which would begin airing twenty years later. The direct adaptation of Conan Doyle short stories to individual teleplays in series format had not been done outside a six-episode production in 1951, no recordings of which survived the live broadcasts. Despite its occasional faults in writing, pacing, and production, Sherlock Holmes proved that the format was sound. Beyond this contribution, the programme’s selection of stories to adapt is, occasionally, unique. This series includes the only English screen adaptations of both The Retired Colourman and The Beryl Coronet. 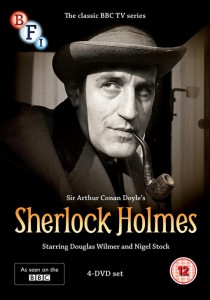 Douglas Wilmer, at 95, is the world’s senior living Sherlock Holmes. His direct involvement with this project, in the form of two original audio commentaries, narration of the first half of The Abbey Grange to replace the episode’s missing first reel, and a new interview, is a pleasure. The DVD extras are the standout element of this release, particularly for those interested in the production process both with respect to Sherlock Holmes adaptations, and to general practices associated with BBC Television in the 1960s. Several of the commentaries overlap in their discussions of on and off-set politicking and of the differences in production mechanics between today’s television and television produced half a century ago. The recollections of the several actors and directors that the BFI was able to enlist are excellent primary material for students and scholars of television history.

The set includes the pilot, The Speckled Band as well as all twelve commissioned episodes, but with some inevitable omissions. The first of the two reels for The Abbey Grange is lost, and the second for The Bruce-Partington Plans exists only as an audio recording. The earlier region 1 release included no material from either episode; fortunately, the BFI has provided reconstructions. In the first case, Wilmer reads the Conan Doyle text to provide the missing narrative. More interesting is the second case. In the second half of The Bruce-Partington Plans, the audio is played over the text of the original rehearsal script. This allows the viewer to identify the moments of deviation between the audio and the script, which the DVD notes are due to ‘actor improvisation, fluffed lines, etc.’ This speaks to the production process, which included minimal rehearsal, and which required the programme to be performed and filmed as though it were live.

The extras also include commentaries for five of the thirteen episodes. The Illustrious Client was the first episode to be recorded following the pilot, and includes commentary from director Peter Sasdy. Douglas Wilmer provides commentary for two episodes, The Devil’s Foot and Charles Augustus Milverton. Two actors, David Andrews and Trevor Martin, who appeared in The Red-Headed League provide its commentary, and director Peter Cregeen comments on the surviving portion of The Abbey Grange. The commentaries focus most heavily on the process of writing, rehearsing, and producing the episodes. Each is prompted to discuss the problems they had working with others within the BBC hierarchy and on set, and taken as a whole, they provide considerable insight into the challenges inherent in early British television, and into why Douglas Wilmer refused to return for a second series. (Peter Cushing would step into the role for the second series three years later.)

Overall, this is an excellent piece of work, and one that was long overdue. The quality of the video and audio far outpaces the blotched and murky transfer of the region 1 release, and the extras provide welcome additions to the archive of primary material on adapting Sherlock Holmes and on BBC Television practices in the 1960s. One can only hope that the BFI and BBC can come to an agreement to make this available in North America as well as in the UK.