The Children of Green Knowe

About the reviewer: Prof Stephen Lacey is Emeritus Professor of Drama, Film and Television at the University of South Wales. His main teaching areas include British film and television, performing for the small screen and performance analysis, with his research interests focusing on post-war British theatre and television drama. He is also the Chair of the Standing Conference of University Drama Departments (SCUDD) which is the professional body representing the UK drama and performance sector in HE. He has contributed to such publications as The ‘War on Terror’: Post 9/11 Television Drama, Docudrama and Documentary (UWP, 2014), Television Drama: Past Present and Future (London: Palgrave, 2000, 2nd edition 2014) and British Realist Theatre: The New Wave in its Context 1956 – 65 (London: Routledge, 1995). 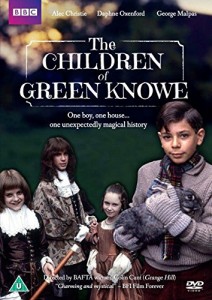 The Children of Green Knowe is a four-part BBC adaptation, by John Stadelman, of the eponymous children’s novel by Lucy M. Boston. Broadcast in 1986, and directed by Colin Cant, this is the first time it has been released on DVD, and Simply Media are to be congratulated for bringing this delightful and moving series back into the public domain. Set in the immediate post-war period Boston’s book is the first of a series of six published between 1954 and 1976 about the titular house, Green Knowe, and has at its heart the house itself, its secrets and the narrative’s boy protagonist, Tolly (Alec Christie). The story has many elements in common with others from what we might call the classical tradition of twentieth-century children’s literature – and indeed television - some of which were also adapted by the BBC, notably John Masefield’s The Box of Delights (1984) and C. S. Lewis’s The Lion, the Witch and the Wardrobe (1988) - it shared production personnel with them, including Paul Stone, who produced all three.

The series is set amongst the landed upper-middle classes and begins with Tolly, abandoned at his public school by his father and step-mother (who live abroad), invited to spend Christmas with his great-grandmother, Linnet Oldknow (Daphne Oxenford), whom he is instructed to call granny, in the midst of cataclysmic winter floods. In one of several biblical allusions, the house is compared to the Arc, and is known by nearly everyone as Green Knowe (pronounced Noah). Green Knowe, Tolly discovers early on, is haunted by the children of his seventeenth-century ancestors (Charles II makes an appearance) who become Tolly’s friends. The story is told almost entirely from Tolly’s point of view, and only ever departs from this when Linnet, who can also see the children, tells stories about the house and its inhabitants: stories, and the importance of story as a way of making sense of experience, are vital here.

Unlike many ghost stories, the mystery is not who the ghosts are – that is obvious within the first twenty minutes – but rather how Tolly will make contact with them and what significance they will have for him: ‘They come when they like’ his great-grandmother tells him. The narrative very cleverly suggests the liminality of the house and the slipperiness of time – this is in Boston’s original, but Stadelman’s adaptation captures it precisely – registered in the children’s names (Toby/Tolly, Linnet, Alexander) which echo into the recent past and present day, in Linnet’s father, son and great-grandson. It is sometimes deliberately unclear which Linnet or Tolly is being referred to, and the viewer is constantly being asked to see one moment, or one character, in relation to another.

The tone darkens in episode four, when Tolly’s personal story is inserted into a broader, public one. Boggis (George Malpas), an elderly handyman, is also connected to the Oldknow family. His son was batman to Tolly’s grandfather in World War I, and his grandson batman to Tolly’s father in World War II: both died. Death, like the biblical floods that are echoed elsewhere, threatens to engulf the family in other ways, as the Oldknows are subject to a curse that was visited on all male members of the family by a horse-thieving witch.

This DVD version is beautifully presented, the series’ high production values evident in the period settings, both indoor and outdoor. It was shot on pre-digital video, but there is no trace of the bland, over lighting that sometimes characterises studio video production.

Like many of the best children’s stories, The Children of Green Knowe is about growing up, about a young person learning how and when to exert power in the world, and about finding his/her place in it. The idea of longing and belonging is threaded throughout the story: at one point, Tolly says ‘I feel as though I have lived here always’, and the series’ achievement is to make us recognise this as an important truth.