Home Viewfinder MagazineThe Use and Abuse of Cinema

The Use and Abuse of Cinema

About the Reviewer: Dr Martin Brady is Lecturer in German and Film Studies in the Department of German at King’s College London. He has contributed to such publications as Marx at the Movies: Revisiting History, Theory and Practice (London: Palgrave Macmillan, 2014), Germania Remembered 1500-2009: Commemorating and Inventing a Germanic Past (Tuscon, AZ: Arizona Center for Medieval and Renaissance Studies: Series: Medieval and Renaissance Texts and Studies, 2012) and German Life and Letters, 1 (2012). Martin's areas of expertise include German Cinema, Documentary and Experimental Film, Modernism (including literature, music, visual arts), Intermediality and Culture in the GDR. He is also currently completing essays on Elfriede Jelinek, the music of Paul Dessau, Slow Cinema and Kafka adaptations.

Eric Rentschler is one of the great writers on German film. For four decades he has written and edited landmark volumes on key periods of German cinema, and many university courses will have his volumes as core texts for Weimar cinema (The Films of G. W. Pabst, 1990), the films of the Third Reich (The Ministry of Illusion, 1996), the West German New German Cinema (West German Film in the Course of Time, 1984), and literary adaptation (German Film and Literature, 1986). Precise, insightful and at times maverick in their choice of films and directors, these books are provocative, erudite and invariably a very good read. 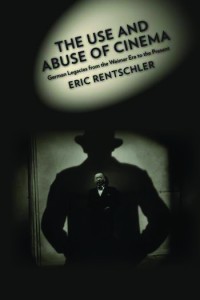 According to his publisher, Rentschler weaves a ‘colorful tapestry’ of ‘excursions through the fraught history of German cinema’, resulting in ‘a film history that is both original and unconventional.’ Perhaps more than his previous work, this volume is certainly a highly personal, quirky journey through German film history: the aim is not completeness or to tell a seamless ‘story of German film’, but to focus on filmmakers (such as Leni Riefenstahl, Alexander Kluge, Rainer Werner Fassbinder), genres (the Weimar mountain films, the post-war rubble films) and writers (Rudolf Arnheim, Siegfried Kracauer, Karsten Witte, post –war historians Klaus Kreimeier) who have redefined, in Dudley Andrew’s words, ‘what cinema is.’

There is something of Walter Benjamin’s materialist historiography in Rentschler’s approach: he collides moments from different epochs, creating constellations that allow the reader to see individual films, filmmakers and movements afresh. This is often revelatory for those with at least a basic knowledge of the field, but may disappoint the general reader in search of an overview or chronicle of film. In the introduction Rentschler acknowledges that his project aims to be neither definitive nor comprehensive and may even appear ‘eclectic’ and ‘idiosyncratic’.

The great strength of this volume is its focus on innovation, on the ‘impure’ constitution of film (here Rentschler’s thinking owes something to Bazin) and on ideas about what film can be, its ‘redemptive capacities.’ Kracauer and Kluge are the cornerstones of Rentschler’s concept of film as a critical and utopian medium and this is why the two chapters on Kluge (10 and 14) are particularly illuminating.

The fragmentary, occasionally disjointed feel of the volume is probably a result of its origin in a series of twenty essays published over a period of thirty years in different organs and for different audiences. The notes indicate that only the introduction is entirely new. This is not a stumbling block for the reader, but both the publisher and critics quoted on the cover could have been a little more candid about the volume’s status: for all the revisions (and by no means all inconsistencies have been ironed out) this is, in fact, an anthology. Perhaps the volume’s mysterious subtitle is a symptom of this reticence. None of this compromises the book’s scholarship, originality or its qualities as a good read. Whilst not providing a comprehensive or balanced history of German cinema – there are too many personal preferences and omissions for that (GDR cinema beyond documentary film, women filmmakers, other German-language cinemas, Austrian most notably) – it is a welcome addition to scholarship on German film and its apologists, one which will provide students and scholars of film alike with many provocative and refreshing insights.