Arrow Video are well-known to horror fans and scholars as possibly the best distributors of B-movie classics currently in operation. Their Blu-ray and DVD editions, loaded with special features like exclusive interviews, lavish booklets and both original and newly commissioned artwork, recuperate films long out of circulation or which have never been released in high definition. Their turning of ‘trash’ peripheral cinema into luxury items makes perfect sense: these films appeal to collectors and researchers who appreciate seeing obscure genre favourites, such as the Euro-horrors and gialli of Dario Argento, Lucio Fulci or Mario Bava, given the attention and careful treatment they justly deserve. This was partly the thinking behind the release of Arrow’s Vincent Price in Six Gothic Tales in 2014, a limited 200-copy Blu-ray boxset that celebrated the actor’s involvement in the Poe cycle of the early 1960s. 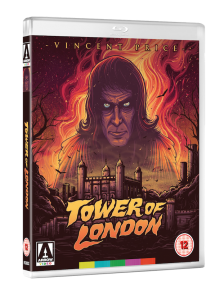 To speak of Vincent Price and the Gothic is, naturally, to also speak of one of the greats of horror cinema, Roger Corman. The latter adapted a number of Poe’s stories into colourful Gothic horror masterpieces, the most notable of which are House of Usher (1960), The Pit and the Pendulum (1961), The Masque of the Red Death (1964) and The Tomb of Ligeia (1964). Sometimes expanding and even merging different plots and scenarios, these films made the most of their modest budgets and provided an intrinsically American counterpoint to Hammer’s contemporaneous franchising of British literary Gothics in the UK.

On the one hand, Arrow’s latest addition to their Corman canon, Tower of London (1962), may be fruitfully positioned alongside these adaptations. The film borrows from Shakespeare’s Richard III, but freely weaves the play’s plot with the prophetic elements of Macbeth and with ghostly visitations that update the supernatural explained of Gothic writers like Ann Radcliffe. In an interesting palimpsestic example of filmic haunting, Tower of London even cannibalises footage from Universal’s own 1939 film of the same title in its Battle of Bosworth Field scene, which was too expensive to shoot anew. On the other hand, the film is also very sui generis: it is shot in black and white (for imposed budgetary reasons); it mixes historical anecdote with lyrical drama; and is more interested in the plausible development of Richard’s hubristic descent into madness than in formulaic genre scares or historical accuracy. The result is a film that feels simultaneously very Corman-esque and not at all like Corman, part of the Gothic cycle and yet a stand-alone rarity. 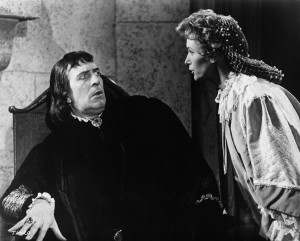 At the level of mise-en-scène, the costumes and some of the settings reveal that this is clearly an American projection of England’s medieval past that often looks more like a fairytale than a period drama. If one can get past these blunders and the sometimes jarring American accents, the film works very well. The taut and poetic script manages to brilliantly hybridise the Gothic romance with Shakespeare (although, arguably, the two have never been far apart); and Vincent Price’s intense performance as Richard III draws on both his theatrical background and his recurring roles as horror villains, a combination that would be played for hysterical laughs in the later Shakespeare-horror homage Theatre of Blood (1973). All in all, Tower of London resurrects one of Corman’s least-known Gothic horrors, and it does so in a beautifully crisp 1080p version that makes the settings and use of chiaroscuro really lift off the screen. This, alongside the edition’s special features (interviews with Roger Corman and his brother, producer Gene Corman; a brand-new audio commentary by Vincent Price’s biographer David del Valle and Tara Gordon, daughter of actor-screenwriter Leo Gordon) will make it an essential purchase for genre connoisseurs and Corman devotees.

For those of us who teach and research literary or filmic units that either specialise in or include Gothic and horror components, Arrow’s releases of hard-to-find classics such as Black Sunday (1960) and Spirits of the Dead (1968) in worthwhile editions with liner notes and articles of academic interest are both priceless and necessary. Arrow take their cult cinema and its position within general histories of film very seriously – notice the publication of their Cult Cinema: An Arrow Video Companion last year. This new instalment in the Corman series is therefore a must-buy for teachers and scholars interested in adaptation, Gothic cinema and its production, and Corman’s role in the development of independent American filmmaking.