About the Author: Dr Mark Taylor-Batty is Senior Lecturer in Theatre Studies at the University of Leeds. His publications include Roger Blin: Collaborations and Methodologies (2007) and Harold Pinter: The Playwright and the Work (2005)

The concept is simple and wonderfully edifying, yet never before captured ...

This documentary is constructed from material gleaned from a day’s workshopped rehearsals of three Pinter plays (Old Times, No Man’s Land and The Dumb Waiter) directed by Harry Burton with the author present and participating. Embellishing this fascinating footage is a dialogue between Pinter and his old Hackney chum Henry Woolf as well as individual interviews with the two men. Narrated information on Pinter’s career and biography glues these together unobtrusively and in ways that usefully structure the material gained from these sources. 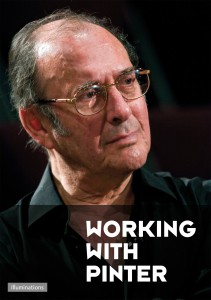 The concept is simple and wonderfully edifying, yet never before captured: sit Harold Pinter in front of sections of his own work being rehearsed by experienced, professional actors, and invite him to engage with the rehearsal room discussions those actors and the director have about what the characters are doing with, and to, one another. As an actor and director himself, Pinter is utterly and comfortably in his element here, and responds in a relaxed and entertained manner to what he witnesses. As he does so, he reveals interesting perspectives on his relationship with his plays and characters, and on his attitudes to the work of theatre.

The discussion between Pinter and Henry Woolf allows these two old friends to reminisce on the author’s first play, The Room, which Woolf first directed in 1957, and this offers the documentary a loose chronological frame within which to place its reflections of elements of Pinter’s practice as a writer. This is essentially what is under scrutiny here: Pinter’s craft, as seen through examples of his work, instances of him reflecting on artistic creativity (his own, and that of actors), and a deliberate emphasis on the vital creative crucible of the rehearsal room, so often missing from documentaries of this type.

Burton states at the onset that the documentary might serve to undermine a presiding image of Pinter as a remote and difficult writer by showing us the collaborative nature of his activity in the theatre. The film certainly captures a contented, relaxed and engaged Pinter, happy to discuss his plays, the process of directing that applies to them and the demands of acting in them. Incidental to this, we also get some interesting perspectives on the genesis of a couple of his plays, and something of his working method – or rather working attitude – as a writer. As such, this DVD is a valuable resource for actors of modern drama, and students of this material.

This is a real treat for those interested in Pinter’s work, for in no other interview published or transmitted (and I know, I’ve trawled them all) does he reflect at such length on the stagecraft, discipline and intuition demanded of the actor.

Alongside the documentary, the DVD contains a complete hour-long interview that Burton undertakes with Pinter the day after the rehearsal-room workshopping of his plays. This is a real treat for those interested in Pinter’s work, for in no other interview published or transmitted (and I know, I’ve trawled them all) does he reflect at such length on the stagecraft, discipline and intuition demanded of the actor. The conversation is friendly and reflective, and provides a crucial insight into the attitudes towards the stage of this celebrated writer. Pinter displays a characteristic reluctance to theorise, and demonstrates a certain distrust of contemporary training, preferring to steer towards issues of intuition and ‘common sense’ when considering actors’ judgements. This is partially frustrating for the viewer, as on more than one occasion the acute and probing nature of the questions is deflected by Pinter’s clear preference not to intellectualise processes which for him are intuitive and creative, but the presentation of this very attitude is in itself very telling: Pinter’s work is not a mechanism that can be unpicked to see which cogs and springs work and how, but rather is something that needs to be inhabited and experienced to be ‘understood’. This DVD does a great deal of justice to this important, and oft-forgotten, perspective.

Harry Burton has achieved what no-one else did while Pinter was alive, in capturing the author in dialogue with his own work in these ways. This DVD, then, is an important item in the catalogue of audio-visual material that survives on Pinter’s subject.

Senior Lecturer in Theatre Studies at the University of Leeds