'Well' my partner noted 'although lockdown has been hard - at least we don't have a secret family living in our house'. He was of course referring to Bong Joon-ho’s megahit Parasite (2019). The award-winning film offers a nuanced debate on class, money and prejudice in contemporary South Korea. The idea of home is central to the film’s narrative – the vast poverty gap in the film is most clearly highlighted in the difference between the dank, insect infected, basement flat (banjiha) where the Kim family reside and the vast luxury home of the wealthy Park family.

The nature of home in South Korean cinema has always been heavily influenced by ideas of class. The divide between rural and the city, those who have money and those who struggle to survive has been present in Korean cinema since its inception. The 1941 film Angels on the Street (dir. Choi In-kyu) explored the lives of children who live in poverty and a local teacher who seeks to rescue them from their lives of stealing, prostitution and abuse. The Korean War and subsequent partitioning would literally destroy homes and families, and in the decades that followed, South Korea would forge a pathway of rapid industrial development that saw the decline of rural communities and the rise of the vast urban spaces with Seoul as the most prominent. The so-called Golden Age cinema offered a series of melodramas and questions of class and gender became hot topics. Access to large accommodation has become a marker of success and achievement and this desire is key to the seminal 1960 film The Housemaid. In Kim Ki-yong’s masterpiece, the whole plot begins when a wife demands a large house and a maid to go along with it. For this middle-class family, the arrival of the maid spells death and destruction for the nuclear family as the father finds himself irresistible drawn to the rather disturbed young woman. For Kim Ki-young, this story operated as a warning shot to the aspirational middle class – the desire to focus on material enhancement opens up the potential for disaster. 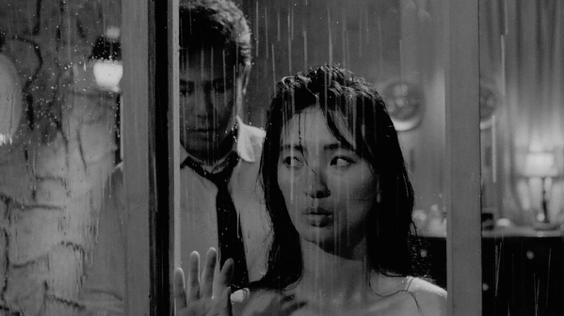 In the 2010 remake, director Im Sang-soo moves the story to the über wealthy. This time the maid is the victim of the rich, scheming and amoral family that surround her. This change from middle class aspiration to millionaire misbehaviour presents a reflection of the changes to the South Korean economy. Despite a rocky economic history, South Korea is currently a nation that operates one of the most concentrated forms of free market capitalism, and as a result, contains one of the most stratified class systems (Wagner 2016).

Whilst South Korea is one of the wealthiest counties in the world, income inequality in Korea is the worst in the Asia-Pacific region (1). Rather unsurprisingly, most negatively affected have tended to be the elderly, lower-class or anyone who does not have a family support network (Hwang 2016). With over 85% of the Korean population living in urban areas (with over 50% in the area of Greater Seoul) South Korea has become a land of apartment dwellers and access to decent accommodation is competitive.

This gap is starkly presented in the hit film Parasite. The interplay between two families, one fabulously wealthy and the other on the poverty line is a macabre tale of deceit and secret rooms. In Lee Chang-dongs' film Oasis, a disabled woman’s family lie about her living with them so they can access government subsidised accommodation. Whilst they live in a modern and comfortable home in her name, she is left in poverty and neglect in an old run-down room. In Lee’s most recent film Burning, the lead protagonists Jon-su and Hae-me are initially enraptured by the wealthier Ben and his luxury lifestyle. The differences between their respective small, one-room homes and his vast apartment acts as an ideal visual marker of the vast socio-economic gap between them. 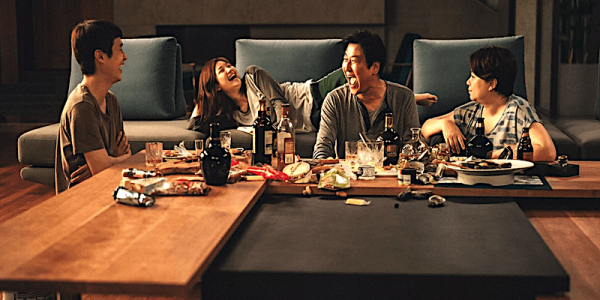 The visual images of home that we see in this collection of films is one of spaces divided by stairs, lamps, tables, doors with an ever-present sense of surveillance. The camera moves around these homes allowing the audience to follow the complex layering of both people, class and gender. In The Housemaid (1960), the camera lies outside the window and spies in on the events taking place, it moves separately around the house allowing the audience to see inside this home from a vantage point inhabitants are unable to. The remake has the camera travel the corridors of the vast mansion separating the staff and the family they work for. In Taste of Others, another Im Sang-soon film that debated class and corruption in the Korean wealthy elite, the whole house is wired with CCTV allowing the matriarch to control, abuse and eventually murder, a maid who is having an affair with her husband. In Parasite, understanding the full complexity of the space only comes at a mid-point in the film and we can see the hidden secrets of the house that the family who owns it are blissfully unaware of.

The house in Parasite does not, rather sadly, exist in real life, and is a composite of internal and external sets and shots. This is an imagined home that, in fact, is not real. In all these films, the lives of the rich are serviced by a support network of often-unacknowledged others. Housekeepers preparing meals, maids packing suitcases and clearing bathrooms, drivers taking people to and from work, restaurants and a hairdresser, and, of course, an endless army of experts to raise their children. With changes in the Korean economy, increasingly, these roles are performed by non-Koreans. The influx of cheap South East Asian labour, notably from the Philippines, has resulted in a group that resides in a precarious situation in South Korea. South Korea operates almost in a nod to Lauren Berlant's ideas on Cruel Optimism (2011). A site of potential development, success and economic freedom, the results are frequently negative for Filipino residents that relocate to the nation (Lee 2006, 160). Films such as The Bacchus Lady (2016), Punch (2011), He's on Duty (2010) Sea Fog (2014) and Bandhobi (2009), Taste of Money, all reference the precarious positions that immigrants to South Korea can find themselves in.

Whilst Parasite, The Housemaid and Burning, focus on the Korean poor rather than immigrant labour, we see that the home of the wealthy is built on the labour of those who are often invisible and unacknowledged and the interplay of class, nationhood and wealth leads to a complex and often painful realisations. Parasite reflects this most closely as we see how the home of the Park’s is so closely intertwined and interdependent on those who they ignore, humiliate and reject, that their spaces of home, have literally merged and become one. As Kim Ki-woon states in the end of the film - “When I have money, I'll buy the house. On the day we move in, Mom and I will be in the yard. Because the sunshine is so nice there. All you'll need to do is walk up the stairs.” Home, money and class are impossibly, and tragically, intertwined.

Kate Taylor-Jones is Professor of East Asian Cinema at The University of Sheffield, UK. She has published on topics including colonial Japanese and Korean cinema, cinema and landscape in East Asia, and domestic violence and the sex trade. She is author of Divine Work: Japanese Colonial Cinema and its Legacy (2017, Bloomsbury) and editor-in-chief of the East Asian Journal of Popular Culture. She is co-editor of International Cinema and the Girl: Local Issues, Transnational Contexts (2015, Palgrave MacMillan) and Prostitution and Sex Work in Global Cinema: New Takes on Fallen Women (2017 Palgrave MacMillan).