Abigail’s Party, Mike Leigh’s excruciating comedy of suburban manners is one of the writer/director’s most enduringly popular and iconic works. First performed at the Hampstead Theatre in London in April 1977, its posterity was assured by a BBC One television adaptation later the same year as part of their Play for Today strand. The play is a claustrophobic portrayal of a nightmarish neighbourhood drinks party, hosted by a socially ambitious (newly) middle class couple; Laurence, a workaholic estate agent and Beverly, a former beautician and ‘a suburban harridan of memorable awfulness’. Their guests are working-class Angela and Tony, plus Sue, an older, upper-middle-class divorcee and mother of the eponymous but never seen Abigail, an adolescent punk.

Taste and its expression in the domestic sphere are key elements of the play’s look and its human dynamic. The dialogue is peppered with pointed references to furniture, food, drink, art, literature and downstairs toilets, and conflicting tastes are used to illustrate and articulate the more fundamental tensions between the characters. In the climactic scene, Beverly and her husband’s terminal argument explodes against a backdrop of Beethoven’s Fifth and kitsch erotic art. Abigail’s Party captured the zeitgeist. Although Callaghan’s Labour Party was still in power when the play was first produced and broadcast in 1977, Margaret Thatcher’s mantra of Britain as ‘a property-owning democracy’ was already well established. Leigh argues that ‘by the late seventies that tame aspiration of the 1950s to ‘Keep Up With The Joneses’ had given way to an aggressive consumerism of a new and much uglier and more cynical strain.’ 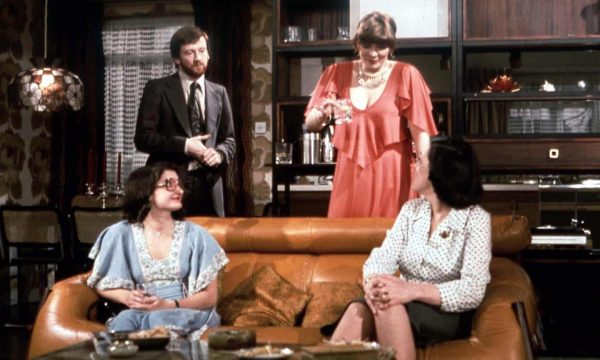 As in all of Leigh’s work the characters in Abigail’s Party were developed through a lengthy period of improvisation with the actors. During rehearsals for the original stage production, Alison Steadman and Tim Sterne were dispatched to the Ideal Home Exhibition, in character as Beverly and Laurence, to research their tastes in domestic interiors. Leigh emphasises the importance of the material in his work because, he says, ‘the characters and the objects and the sense of place and time and the atmosphere and the light, and all of those things... give you a sense of the real world’. Accordingly, the play’s set directions are detailed and precise. One reviewer observed that ‘the tacky-chic room’ suggested the set-designer had ‘sussed out the characters of a play and placed them in the surroundings they deserved.’ Another remarked that the ‘bright orange furniture, Van Gogh reproductions, a fibrelight mobile, and a mail order set of Dickens herald the clash of cultural aspirations before anyone has spoken a word.’

Both Beverly and Laurence want to impress their neighbours with a classy party in their aspirational des res, but each has different ideas about what this should involve. Beverly wants sex and glamour; her model of cultural sophistication is derived from women’s magazines and glossy advertisements. She sashays around her party dispensing gin and tonics, ‘little cheesy-pineapple’ snacks, cigarettes, unsolicited make-up tips, and bullies her guests into participating in her idea of fun. Laurence, by contrast, is keen to portray himself as an art lover. He homes in on Sue, engaging her in conversation about painting, classical music and literature. But he gives himself away, the ‘very well-bound […] embossed in gold’ editions of Shakespeare and Dickens are merely ornamental; ‘Macbeth… part of our heritage… of course, it’s not something you can actually read’. Beverly and Laurence come to blows over their tastes in culture. There is a struggle for control of the record player; although Laurence’s efforts to resist Demis Roussos - ‘We don’t want to listen to that fat Greek caterwauling all night’ – prove ultimately futile. Beverly belittles her husband’s efforts to discuss fine art, while he in turn accuses her of ignorance, describing a print she has bought as ‘cheap, pornographic trash’. (1)

Critics of Leigh have argued that Abigail’s Party is snobbish and lacking in compassion, and that it sneers at aspirational suburban mores. When the actor Kenneth Williams went to see the original theatre production, he recorded in his diary that he stayed only for the first half, partly because he found the play too much like ‘the actual mess’ of life, but mainly because of the ‘frightful’ audience. It was composed, he concluded, of ‘Hampstead sophisticates knowingly laughing at all the bad taste lines “Oh! a bottle of Beaujolais! How lovely! I’ll just pop it in the fridge…” and they fell about, loving their superiority.’ Likewise, in a famously damning review Dennis Potter wrote that Leigh diminished,

the ‘characters’ … to a brilliant puppetry of surface observation. The thin wires of prejudice and superficial mimicry can nearly always be seen, tangled up with the words. […] This play was based on nothing more edifying than rancid disdain, for it was a prolonged jeer, twitching with genuine hatred, about the dreadful suburban tastes of the dreadful lower middle classes. […] Abigail’s Party was horribly funny at times, stunningly acted and perfectly designed, but it sank under its own immense condescension. […] As so often in the minefields of English class-consciousness, more was revealed of the snobbery of the observers than the observed.

Leigh denies that his work is cruel or condemnatory, or that he is judgmental. He says that the characters are given the props and the lines that they ‘require’, and that he just shows their reality, that he simply ‘reflect[s] and lament[s] on how we live our lives’, in thrall to ‘The Done Thing’. It is the inevitable falling short of ‘our received idea of what we should be, rather than just the thing of being what we actually are’, that is at the root of their comedy and tragedy. Ray Carney suggests that ‘Leigh is not interested in mocking someone else but in showing us things about ourselves. As he has often insisted, there is no ‘them’ in his work. Everywhere we look, we are meant to see ourselves.’ And perhaps audiences did and do find themselves in Abigail’s Party. Reviewing the theatre production, Bernard Levin concluded that: ‘The stage had become a mirror, wherein the spectators saw themselves, and did not like what they saw, the recognition being so painful that it had to be walled in by the defence-release of laughter.’ If a significant proportion of the theatre audience recognised themselves in what they saw on the stage, then one can only assume that experience was magnified during the television broadcast, both by the size of the audience and the fact that they were watching from the (dis)comfort of their own homes.

"All About Abigail’s Party"

Abigail’s Party is now over forty years old. During those more than four decades the broadcast version has been transferred to video, DVD and online, and there have been multiple revivals of the stage version. It remains hugely popular. However, can a play set in ‘the present’ of the late 1970s still speak to contemporary sensibilities? Leigh argues that the work remains relevant because ‘“Beverly Culture”, if you want to call it that, is dripping and groaning on every TV channel. There are whole stations about house make-overs and fuck knows what. People utterly relate to the horrors of what it is about.’ Nevertheless, because the décor and the cultural vehicles employed to articulate class and aspiration – three-piece suites and silver-plated candelabras – now seem quaint and dated, the play’s teeth risk being blunted by its retro charm. The details of interior design that were so vital to the original production risk making Abigail’s Party both a period piece and a shibboleth over the longer term. An insightful review on the website TV Cream noted that,

rare is the production, it seems, in which the leading actress will dare to move away from Steadman’s original swooping Essex intonation, or the decor away from the original MFI shelving/Tretchikoff painting/ice-and-slice chic. It’s a bit of an odd state of affairs, all told, that what began as a series of improvisations … has become set in stone, as it were. This can tend to give the whole thing a seventies-in-aspic air that trivialises it if you’re not careful.

Television might keep Abigail’s Party relevant, but it can also – as this suggests – reduce it to an exercise in nostalgia and kitsch. In 1997 BBC2 (2) curated an Abigail’s Party Night to celebrate the 20th anniversary of the first broadcast. This included a showing of the play itself, a profile of Alison Steadman, a documentary featuring Leigh and the surviving cast and crew, another about Demis Roussos, and a couple of brief interludes entitled ‘Party Nibbles’, which featured celebrities discussing the clothing and food at Beverly’s do. As Raymond Williams observed, television viewing is often less about discrete programmes than the ‘flow’ of broadcasting. Consequently, the experiences of watching Abigail’s Party as a contemporary Play For Today, a strand which often featured experimental, hard-hitting drama, and as the focus of a theme night framed by documentaries about incidental (and not even original) (3) features of the play, and interstitials with a retro styling would be quite different and, together with the passage of time, would shape its reception and interpretation by audiences.

The play’s aesthetic is increasingly presented not as a key element of a biting social commentary but as kitsch fashion trend. In 2012 Topshop advertised a range of retro clothing on their website encouraging shoppers to ‘Get all dressed up and come on over for Abigail’s Party! Think cocktails and finger food, prints, embellishments and billowing sleeves – we’re playing by 70s rules.’ Similarly, in 2015 a hipster supper-club was offering an Abigail’s Party themed ‘five course pop-up dining experience, combining food, theatre, music and set design […] complete with lava lamps, hostess trolleys, shag-pile rugs, loud wallpaper, jazzy sofas, drinks cabinets and every shade of beige.’ Leigh himself claims to find this ‘70s kitsch thing … extremely bizarre’ and argues that ‘no one … who knows the play [should] run away with the idea that it’s … just an exercise in kitsch, … because a man does die of a heart attack and some quite serious things happen below the comic surface.’

If Abigail’s Party is perceived as kitsch it arguably becomes both superficial and ‘safe’, with its essential humanity overwhelmed by an unhealthy fixation on the décor. In this sense, the play itself perhaps falls victim to a similar fate to its protagonists.

(1) The painting in question is ‘Wings of Love’ by Stephen Pearson (1972), which depicts a naked man and woman encircled by a giant swan in a quasi-surrealist landscape. It was a commercially reproduced picture that sold in huge numbers. It has become - together with Vladimir Tretchikoff’s green-skinned ‘Chinese Girl’ and Violet Skinner’s ‘Wild White Horses’ - an icon of ‘kitsch’ art and has enjoyed a renewed popularity as such. In 1999 it featured in an exhibition called ‘Taste: The New Religion’ at Manchester’s Cornerhouse Arts Centre.

(3) Due to copyright restrictions, when the play was transferred from stage to television, Elvis Presley was replaced by Tom Jones, and Jose Feliciano by Demis Roussos, substitutions that Leigh described as ‘ridiculous’. However, Roussos became such an iconic element of the play that when the play was revived at the Hampstead Theatre in 2002, Leigh recalls that ‘the production was absolutely faithful to the original stage play, except I allowed the director David Grindley to use Demis Roussos instead of Jose Feliciano. The feeling was that people would be so disappointed otherwise.’

Dr Ruth Adams is a Senior Lecturer in the Department of Culture, Media & Creative Industries at King's College London, where she has worked since 2003. She writes about museums and heritage, youth subcultures, popular music, film & television, and digital technology. She is interested in Englishness, nostalgia, the legacies of colonialism, gender and ethnicity, socio-economic class and cultural consumption.