About the reviewer: Dr Stacey Abbott is a Reader in Film and Television Studies at the University of Roehampton. She teaches on a wide range of subjects on the film programme, including the history of animation and a module on the vampire in film. Her research focuses upon gothic and horror genres in film and television, with her most recent publications including Undead Apocalypse: Vampires and Zombies in the 21st Century (Edinburgh University Press, 2016), TV Horror: Investigating the Dark Side of the Small Screen (I.B. Tauris,2013), co-written with Lorna Jowett from the University of Northampton and Supernatural: TV Goes to Hell (ECW Press, 2011), co-edited with David Lavery from Middle Tennessee State University.

It’s beginning to look at lot like Christmas. As the nights draw in, the temperature drops and the Christmas lights appear, television, for many, takes on a central role during the holidays; whether by watching It’s a Wonderful Life, anticipating the Doctor Who Christmas special, or listening to the Queen’s speech. In the tradition of Charles Dicken’s A Christmas Carol, Christmas is, in particular, an ideal period for tales of the ghostly and spectral. That is, in fact, what Derek Johnston argues in his rigorously researched and insightful Haunted Seasons: Television Ghost Stories for Christmas and Horror for Halloween. Acknowledging an established practice of programming ghost stories for Christmas on British television, Johnston examines the pre-history to this televisual tradition, through an exploration of the pre-Dickens origins of the association between Christmas and the supernatural. 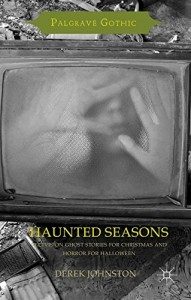 He takes the reader through the Middle Ages, the Reformation, the Victorian period and into the twentieth century, considering oral, literary and dramatic ghost story traditions. He then offers a comprehensive, and complex, history of the ghost story across broadcast media, considering how and why Christmas has repeatedly become an ideal space in which to wallow in the excesses of hauntings, spirits and nocturnal visitations. Significantly, while a substantial portion of the book is focused upon Christmas, Johnston also examines the role of television at Halloween. In this manner, the book offers insightful analysis of both British and American television, in which Halloween figures more prominently, with a brief sojourn to South Korea to consider how ‘chilling’ ghost stories on film and television have become associated with summertime, offering a relief from the hot weather. As a result, the book opens its analysis to consider the diverging and culturally specific seasonal attractions to the supernatural. The discussion of Korean television, albeit briefly, challenges the Anglo-centric focus of so much of contemporary television and television horror studies. This is a welcome addition but it would have been nice to have further such examples.

In addition to a comprehensive history, the book offers an engaging analysis of the gothic meanings of these traditions. Johnston first considers how the gothic is focused upon the disruption of normality, ideally suited to seasonal specials in which programming choices are designed to disrupt the televisual flow and conventional programming strategies, in the form of television movies, or holiday-themed episodes of long running series. Second, Johnston considers how ghost stories negotiate and channel feelings of nostalgia, as well as presenting alternative representations of history and heritage than are present within mainstream television. The final chapter offers detailed case studies of the British Ghost Story for Christmas and The Simpsons’ Halloween ‘Treehouse of Horror’ specials. This book is filled with historical detail about ghost stories, gothic, horror and television, as well as insight into the cultural meanings of these traditions. Haunted Seasons is an original and significant addition to a growing body of work on television horror. It, also, offers a distinct approach to television, by focusing not on serialised drama or regular programming, but singular television movies, events or ‘specials’ that invite us to see the world through fresh, sometimes haunted, eyes. This book is ideal for the television and horror scholar but also for anyone who enjoys a brief, seasonal, sojourn into the ghostly and the macabre. Happy (haunted) holidays.