About the reviewer: Tamara Courage is a PhD Researcher in the Department of Film, Theatre & Television at the University of Reading.

Scholarly literature on slum cities abound in the field of urban studies and architecture. As described by the author Igor Krstić in his book Slums on Screen: World Cinema and the Planet of Slums, visual representations of these heavily populated urban informal settings date back to the early silent era in film history. In film studies though, the issue of slum representation has often been subsumed under the rubric of the cinematic city. So, this marks the first academic study dedicated exclusively to the task of defining the concept of slums and its representations in world cinema.

Part of the difficulty with doing so would be to understand how to structure the historically and geographically huge topic of slum representation. How does one adequately represent as well as analyse such complex communities with residents of differing income levels, relations between ethnic groups, and systems of political support? Recognising the politics inherently embedded within this field, this book draws from a broad range of disciplines from the social sciences to film studies. 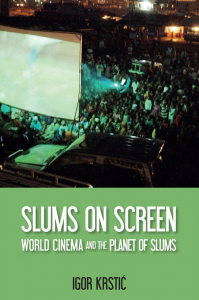 In terms of its methodology, Krstić ‘proposes a cyclical rather than teleological, intermedial rather than medium-specific, polycentric rather than nation based understanding’ (11) of documentary or realist modes in world cinema. Doing so allows the author to identify common tropes and procedures across a variety of productions in time and space and to structure the book chronologically without being limited to a historiography of slum representations in cinema.

The book is divided into two parts: ‘Global Currents’ (Chapters 2-7) and ‘Local Expressions’ (Chapters 8-9). Each chapter provides a carefully selected film case study based on its particular historical period, theme or strategy. Part One starts with 1900 and the pioneering days of early cinema and photography. It then proceeds to address various eras and film currents in world cinema. This includes the interwar period in England from the 1920s-1930s, the post-WWII era of Italian Neorealism and its particular influence elsewhere as a film style and the rise of social strategies of filmmaking seen in Third Cinema’s docufictions of the 1960s and 1970s. Here, Krstić takes notable moments in cinema and reinvigorates them through close textual readings, by tracing historical and geographical linkages and by making comparisons between film examples.

This compelling academic study goes from strength to strength though in Chapters 6 and 7. First, in Chapter 6, Krstić’s analysis engages with cinema’s realist modes of slum representation in the postmodern era by surveying a selection of filmmakers from Japan, the Philippines, Latin America and Eastern Europe who utilised techniques such as bricolages to critique, parody or reuse previously existing images of representation. 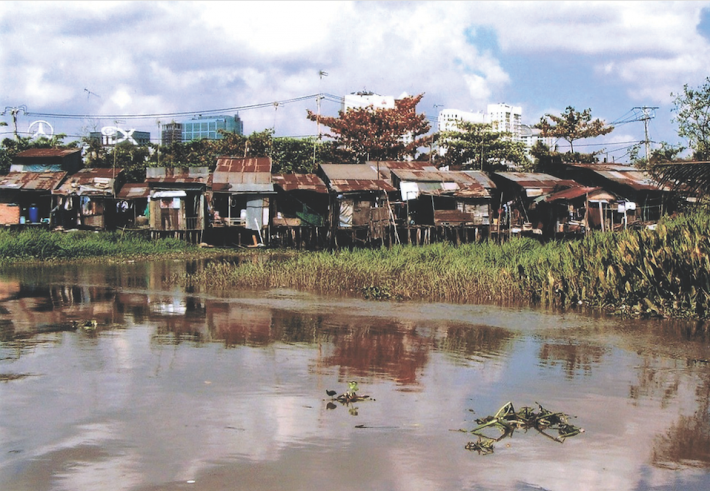 A slum in Saigon, Vietnam.

Then, in Chapter 7, the author examines more contemporary depictions of slums on screen through the digital practice. It begins by looking at the filmmaker’s renewed return to realism made possible by the advent of affordable and portable handheld DV technology. Rejecting the notion that the emergence of digital video marks the loss of indexicality, Krstić’s work joins recent scholarship (Nagib, Elsaesser, Rombes) that argues for a correlation between the emergence of digital video and the realist revival.

This revival of realism is examined using two examples from differing analytical perspectives. The first involves a collective digital Indie revolution in the Philippines and its kinaesthetic qualities as it engages with slum realities through physical movement and bodily immersion via the shaky hand held DV camera.

The second example of what Nagib and Mello define as ‘the return to the Real’ focuses on Portuguese auteur Pedro Costa and his Fontainhas Trilogy. Here, Krstić provides an account of Costa’s personal journey from analogue to digital filmmaking and from postmodernism to realism which is also seen as a ‘development towards rediscovering the ethical potentials’ (177). Through his encounters with locals of Fogo, Costa abandons narrative for a creative tension between a highly aestheticised and documentary-like viewing experience.

Part Two breaks away from the lesser known New Wave Philippine cinema and the oeuvre of Pedro Costa toward slum representations in mainstream cinema. Curiously, Krstić also chooses two commercialised films—City of God and Slumdog Millionaire—which have been scrutinised to a considerable extent in the past. At first glance, this strategy may seem puzzling to the reader. However, Kristic’s palimpsestic treatment of Rio de Janeiro’s favelas and Mumbai’s slums offers a novel approach to understanding how slum representation in cinema continues to redefine traditional notions of realism via ‘archaeological sites’.

Krstić’s highly accessible book shines a perceptive light on an area of world cinema that has been surprisingly under-researched for too long in film studies. It offers a refreshing insight into the relationship between the evolution of film practice and slum presentation and representation. This would appeal to both early researchers and scholars who are interested in the growing scholarship of world cinema.