Home Viewfinder MagazineVoices in the UK

Voices in the UK

About the Author: Paul Kerswill, Professor of Sociolinguistics, Lancaster University. Currently working on the second of two large ESRC-funded projects on phonetic and grammatical features among teenagers and older people in London, taking account of its massive ethnic diversity.

Today, we are in an age in which we bemoan the loss of old certainties, as social networking topples dictators in an instant and journalists apparently routinely listen in to politicians’ confidences. Our language is swamped by youthspeak, born in the multicultural inner city and causing communication breakdown between the generations. How good it was for me, in these rapidly changing times, to be sent Voices in the UK: Accents and Dialects of English, a two-CD set of English dialects as they once were, rural, local, quaint, and beautiful. An old man from the North Riding (poetic name, this) regrets the coming of technology: ‘They get stuck on these here tractors, you know’. But I digress: here we have a rich compendium of the language of (mainly rural) England, Scotland, Wales and Northern Ireland, through the voices of men (and some women), many born in the last quarter of the nineteenth century, speaking to us in clear, expressive voices about their skills (making cartwheels, stacking corn) and their pastimes (skating in the Fens, riding penny farthings). These CDs are the tip of a vast iceberg of recordings of English dialects made since 1915 (in Germany!) through to the end of the century. Much of the iceberg is now very much in view, the recordings having been digitised and archived. And a lot of it is available through the British Library, but also Leeds and Swansea universities, as well as the BBC. 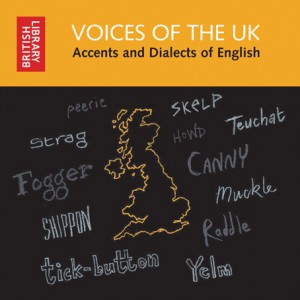 What is the value of 143 minute-long snippets of talk, which on the face of it give us just a passing glimpse? The excellent essay by Jonathan Robinson suggests that actors will be able to mine the collection. But Robinson also talks about how the collection provides a ‘meaningfully distributed network of locations and enable[s] comparisons to be made both over time and across geographic space’. So we have a snapshot of that stratum of British society – the rural working class – which is most obviously rooted in both place and time, in a way ‘modern’, urban people simply aren’t. Almost everybody’s English today is much closer to the standard, and this reflects our much more diffuse, even global, life experiences. If nothing else, listening to the recordings tells us this lesson.

The collection isn’t just fixed in time, for there are recordings of both young and old, some born as late as the 1980s.

The collection isn’t just fixed in time, for there are recordings of both young and old, some born as late as the 1980s. These are modern voices, of course, lacking the sensation of nostalgia, and strangeness, evoked by the older folk. So we can hear for ourselves the changes in the particular locations across the country. A significant, but unsurprising, truth is that the younger the person is, the less ‘dialectal’ their voice is, in the sense that it is harder for a latter-day Professor Higgins to determine exactly where they come from, beyond the general region. Robinson talks about the ‘astonishing regional diversity’ of the dialects in the recordings. Yet they are all, essentially, comprehensible to most (British) listeners, and a linguist will tell us that the differences are not actually that great. English is diverse, but Robinson should beware the ‘golden age’ principle (‘things were better in the old days’): way back in 1905, Joseph Wright wrote in the preface his English Dialect Grammar: ‘There can be no doubt that pure dialect speech is rapidly disappearing even in country districts, owing to the spread of education, and to modern facilities for intercommunication.’ Dialects seem to have been ‘disappearing’ since well before the time of the featured speakers. Although we do get to hear the self-maintaining and distinctive accents of some of our cities, the youth of Liverpool, Newcastle or Glasgow are absent. What the collection doesn’t show – as Robinson admits – is the rise of new urban dialects following the large-scale immigration of the last forty years. That is for another collection, as he says.

The British Library have done us a great service in allowing the public – film-makers, actors, and school children – an opportunity to listen to an array of unvarnished, authentic accents and dialects, old and new.