About the author: Laura Mayne is a Doctoral Candidate and one of the Research Assistants on the 'Channel Four Television and British Film Culture' project (www.c4film.co.uk/), which currently being undertaken at University of Portsmouth with the collaboration of the BUFVC, looking at the impact of Film Four.

Stephen Frears’ Walter was screened on Channel 4 on 2 November 1982 and was the first feature film shown on the channel’s opening night of transmission. Based on a novel by David Cook, produced by Central Television and funded by Channel 4. The second part of the story, Walter and June, shown in 1983 and based on Cook’s subsequent novel Winter Doves, saw McKellen joined by Sarah Miles played his lover, June. Walter was designed to provoke; it was controversial and daring in its content and completely unprecedented in its use of real disabled people as characters in the story. It was nevertheless released to critical acclaim, and won first prize at the International Rehabilitation Festival, an award from the World Congress of Rehabilitation and a BAFTA for best TV music, while Walter and June also gained approval for its approach to issues of mental health.

Ian McKellen gives an astounding performance as Walter, a young man with severe learning difficulties who suffers neglect and ill-treatment ...

Both films were later re-cut into one feature film for release in the USA under the title Loving Walter. Recently, both films have been re-released by Network DVD in a special two-disc set (RRP £19.99). This release contains both Walter and Walter and June as originally transmitted on Channel 4, as well as the re-cut version of Loving Walter. The original films contain important scenes which were omitted from the US release (including a particularly gruesome scene in Walter in which one patient in the mental hospital brutally attacks another while a staff member hides in a cupboard), and so viewing both films as separate entities is essential for gaining a better understanding of the films, their treatment of mental health issues and their criticisms of mental institutions.

Ian McKellen gives an astounding performance as Walter, a young man with severe learning difficulties who suffers neglect and ill-treatment in an uncaring society. He lives with his weary mother and apathetic father and spends his time tending to his pet pigeons and holding down a job as a cleaner in a local factory. Following the death of his parents, Walter is deemed unable to look after himself and placed in a mental institution where he helps to look after other, less able residents. Walter and June picks up the story 19 years later and follows Walter’s escape with June (Sarah Miles), an unwilling mother dealing with manic depression and agoraphobia. They occupy a squat in London and are happy for a time, until June leaves with another man and later dies in a fall. After hearing of June’s death, Walter returns to the institution.

.. a harrowing insight into social responses to mental disability in post-war England

McKellen skilfully draws the viewer into Walter’s state of mind while Frears gives us a harrowing insight into social responses to mental disability in post-war England, reactions which were sadly still all too common in the 1980s. Walter’s relationship with his mother Sarah is characterised by a lack of understanding and communication, and this is exacerbated by her tendency to see his disability as a divine judgement for her sins. Such ignorance of disability inevitably breeds fear and anxiety. A series of uncomfortable close-ups of Walter and his mother shows her uneasiness at his lack of physical and emotional boundaries, while we also see excruciatingly drawn out shots of Sarah’s friend awkwardly sidling past him in the tiny family home with a fearful and patronising ‘good boy, Walter, good boy’.

Sadly, these attitudes are not something endemic to the uneducated few, and Walter also suffers at the hands of mental health professionals. Frears paints an uncannily accurate portrayal of mental health institutions in the 1960s, and does not shy away from showing the gory detail of life in such places. In her seminal work Put Away: A Sociological Study of Institutions for the Mentally Retarded (1969), Pauline Morris carried out a UK-wide survey of institutions ranging from clean to unsanitary, from those with recreation facilities to those with none, but what all of these institutions shared in common were extremely cramped living spaces, precious little privacy and a horrendous lack of adequately trained staff. In Walter the institution caters to very basic needs, and patients share large, cramped dormitories with little opportunity for recreation. Staff respond to patients with a lack of interest, failing to interacting with them beyond the basic requirements of their jobs, which they are not properly trained to do. Particular to the institution is a fear of sexual relationships between those with mental disabilities, at the time inspired by the idea that the disabled would pass on their conditions to their offspring. When Walter is first admitted to the hospital he is asked ‘Can you subtract? Multiply?’ to which his social worker scoffs ‘I hope not!’ However, the film refreshingly eschews any moral position, and sex for Walter is shown to be an exhilarating and enjoyable experience. 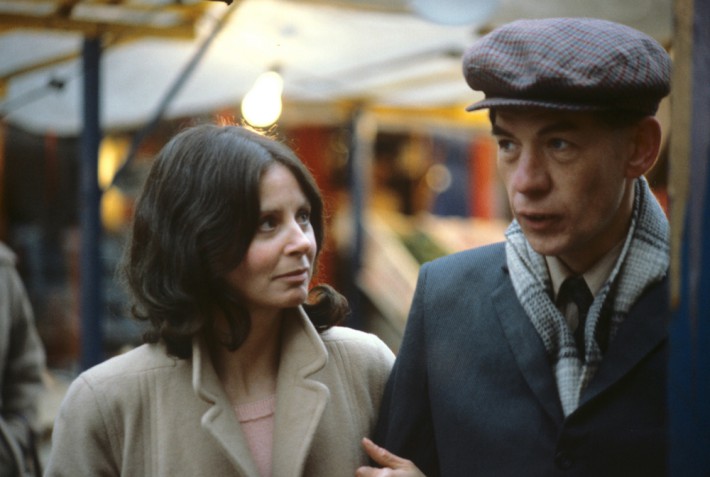 With his use of extreme close-ups in small spaces Frears creates an atmosphere of confinement that is particularly fitting to Walter’s situation. He is likened to a caged bird, which might perhaps explain his affinity for pigeons. At home Walter’s mother leads him to believe that he is under constant surveillance by his dead father: ‘Your dad is watching you...Do you want him to ask Jesus to punish you?’ At work he is bullied and on one occasion locked in overnight by male colleagues who are concerned with projecting an image of masculinity to which Walter does not conform, and following his parent’s death he is also imprisoned by the authorities who do not know what else to do with him. Between attitudes to mental disability at home, work, and the institution, Walter simply exchanges one cage for another. After escaping with June, he finds some freedom in learning how to fend for himself in the real world. Both Walter and Walter and June deal with the vulnerability of the mentally disabled in a society lacking in education and decent care facilities. However, both films also show the potential of those affected by mental disability to grow – to engage in loving relationships, and to learn how to live with independence and dignity. If the proper structures had been in place for Walter, the viewer is left to wonder, perhaps, just perhaps, things might have turned out differently.